Stephanie Hinnershitz is an assistant professor in the Department of History at Cleveland State University in Ohio. She specializes in immigration and Asian American history and her most recent book, A Different Shade of Justice: Asian American Civil Rights in the South, was published by UNC Press in 2017. She is currently working on her next book, a study of Japanese American internment as a history of prison labor titled Wages of War: Japanese American Incarceration and Prison Labor during World War II. 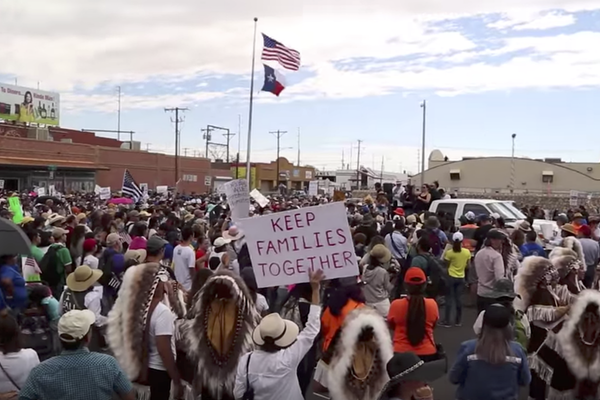 In light of the Supreme Court’s recent ruling on the Nielsen v. Preap case, a return to the history behind “crimes involving moral turpitude” and the concept’s unique relationship with immigration exclusion and deportation is useful. As many have noted, the Court’s ruling that immigrants who committed crimes and served their sentences (in some cases years or decades ago) can still be detained for deportation without bond hearings raises questions about the constitutionality of indefinite detention. But, as Justice Ruth Bader Ginsburg noted, the ruling also concerns the lingering and vague definition of “crimes involving moral turpitude” and its role in immigration.

In her dissenting opinion, Ginsburg referenced the dangers of interpreting crimes involving moral turpitude (or CIMT) as a means to curtail immigration. Under the Illegal Immigration Reform and Immigrant Responsibility Act of 1996, CIMT is a wide-ranging category of activities including serious crimes such as rape, incest, murder, and larceny, but also more minor offenses like petty theft or, as Ginsburg stated, “illegally downloading music or possessing stolen bus transfers.”

While Ginsburg used modern examples of small crimes in her dissent, “moral turpitude” has been a staple in immigration law for over a century and has rarely been questioned as a useful tool for exclusion and deportation. In fact, the concept of “moral turpitude” and the litany of crimes that are evidence of an individual’s lack of “good character” (a requirement for naturalization rooted in the Naturalization Act of 1790) has historically applied primarily to immigration law. When an immigrant commits and serves time for a crime, immigration officials and courts can interpret that crime as one of “moral turpitude,” which indicates depravity, immorality, recklessness, or maliciousness on behalf of the perpetrator.

The idea of using morality to target specific migrant groups first appeared in formal immigration policy in 1875 when Congress used its plenary powers to create an immigration law to exclude Chinese women suspected of being “undesirable” or engaging in prostitution—a response to a growing wave of anti-Chinese sentiment. “Moral turpitude” as an explicit phrase, however, made its first appearance in the Immigration Act of 1891. By the late nineteenth century, “new” immigrants from southern, eastern, and central Europe (as well as Mexico and the Caribbean) were beginning to arrive in larger numbers,as they fled political, social, and economic upheaval in their homelands and soughtjob opportunities in the industrializing United States. Many Americans, however, were alarmed by the arrival of a “horde” of immigrants who were not white Anglo-Saxon Protestants. Politicians and nascent anti-immigrant associations argued that the new immigrants were prone to criminal behavior and liable to become public charges. In response, the 1891 Act listed classes of migrants who were unfit to naturalize and therefore unfit to enter or remain in the United States,. The list included “idiots,” “insane persons,” the diseased,  “paupers,” polygamists, and those who had been convicted of a felony, misdemeanor, “or other infamous crime or misdemeanor involving moral turpitude…”

Congress continued to pass laws that solidified the idea that immigrants were held to a higher degree of morality than most American citizens. In response to more radical political and social movements including socialism, anarchism, and labor organizing during the early twentieth century, the Immigration Act of 1907 expanded the list of offenses that qualified for exclusion. The 1907 Act banned “persons who have been convicted of or admit having committed a felony or other crime or misdemeanor involving moral turpitude; polygamists, or persons who admit their belief in the practice of polygamy, anarchists, or persons who believe in or advocate the overthrow by force or violence of the Government of the United States, or of all government, or of all forms of law, or the assassination of public officials; persons coming for immoral purposes…”

The Immigration Act of 1917 further consolidated the groups of “undesirables,” but added specific references to “constitutional psychopathic inferiority” and “abnormal sexual instincts” as reasons for exclusion as well as deportation. The 1917 Act allowed for immigration inspectors and other immigration officials to deny entrance to and call for deportation of confirmed and suspected homosexuals who fell under these categories at the time or committed sodomy, a “crime of moral turpitude.” Throughout the early twentieth century, “undesirability” and “crimes involving moral turpitude” reinforced one another and served as a means to expand immigration exclusion and deportation at a time of heightened nativism and xenophobia.

On June 25, 1952, President Harry S. Truman issued his veto of House Bill 5678 (or the McCarran-Walter Act), a proposal to amend the United States’ immigration policies. Truman not only insisted that the bill did little to address the discriminatory quotas targeting migrants who did not hail from Western European nations, but he also argued that it made it easier to deport immigrants who might be an asset to the United States during the Cold War rather than a threat or liability. Under HB5678, refugees fleeing the Soviet Union or those already living within the United States could be excluded or deported if “convicted of a crime involving moral turpitude” beyond a “purely political offense.”

The bill’s provision for excluding and deporting immigrants based upon their ties to subversive practices and organizations is not surprising considering Cold War tensions. However, the bill also made “crimes involving moral turpitude” usefully vague during a time when many politicians and government officials argued that the U.S. was under constant threat from Soviet influence. But Truman believed that America’s reputation as a beacon of freedom for the tired, poor huddled masses would be challenged by an unnecessarily harsh immigration policy. The bill was poised to criminalize immigrants whom the U.S. should be sheltering rather than excluding.

“We have adequate and fair provisions in our present law to protect us against the entry of criminals,” Truman wrote in his veto memo. “The charges made by the bill in those provisions would result in empowering minor immigration and consular officials to act as prosecutor, judge and jury in determining whether acts constituting a crime have been committed.” With such leeway in interpreting crimes of moral turpitude, the power to discriminate against immigrants while denying their rights could fall into misguided hands.

Despite Truman’s objections, Congress overrode the President’s veto and HB5678 eventually became the Immigration and Nationality Act of 1952. Under the 1952 Act, an immigrant who committed a “crime involving moral turpitude” within five years of their admission to the U.S. was deportable (those who committed two or more CIMTs were deportable regardless of their admission date). The Immigration Act of 1996, however, added the ambiguous language on when immigrants can be detained after being released from custody and also allowed for local law enforcement agencies, state-level officials, and immigration judgesto interpret CIMTs broadly.

Truman’s warnings against criminalizing immigrants and allowing crimes involving moral turpitude to be interpreted widely ring true today under President Trump’s administration. Moral turpitude is a phrase that has a long legacy of being used for exclusionary and discriminatory practices in deciding who is and is not fit to be an American. Perhaps it is time for a more careful examination of this component of American immigration policy in light of the questions over detention and due process.