A Historian Reflects on a Long Life 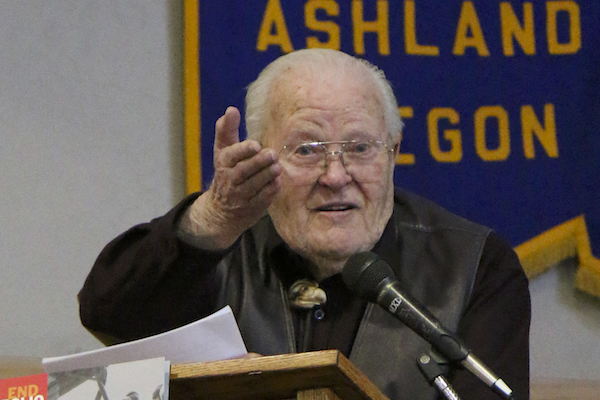 A lifelong historian, beginning with a spring, 1936 term paper on Franklin D. Roosevelt’s rise to the Presidency, Vaugh Davis Bornet frequently contributes to HNN. At 101 years old, he offers advice on living a long life, with a little history along the way in this personal essay.

Recently I saw the movie South Pacific all the way through.  The Frenchman in exile has decided that the rest of his life (half is gone) has to be with Mitzi Gaynor, the Navy Nurse.  His two children are not enough, and neither is his ample estate.  He will live long if and only if he has  loving companionship! Yes!

Beth Bornet was with me for 68 Anniversaries, beginning after our wedding in late 1944.  It is the place to start on the subject of  seeking and getting Longevity beyond any doubt.  After all, she planned and prepared every meal of those at Home for over half of my life, satisfied yearnings, selected and vetoed our guests, handled children.

So it is out of the question for me to start explaining/bragging over my oh-so-sensible choices on “how to live.”  After all, my partner in Life is the prime consideration as I ask myself:  “Why did you live so long?”  To you I say, “Choose and preserve Companionship, to guarantee a long and healthy life.”  (Anyway, that is my educated opinion.)

Next, I do think that Being Active is important. Those who lived long whilst drifting slowly and quietly and inactively through all those years do have a point. It can’t be denied.  But I do think I’m right as rain in urging activity, avoiding “just sitting there.”

Yes, I’m a Navy veteran, over 5 years active; 18 busy reserve.  Not sure the difference this participation has made, overall; did get help with medical bills, without doubt.

Move about, talk, play, be doing something all or most of the time.  (That doesn’t mean I am hostile to Rest, Relaxation, and quiet Reflection now and then. But it does seem that friendly companions around most of the time has to be related to wanting to Stay Alive and quite possibly to succeeding!)

Minding the business of your communities is related to longevity.  Join things. Meddle.  Speak up! Be alive and show it.  Make a difference.  Each of us, in his and her way, certainly did.  No detailed proof necessary.

I am going to waste little time on urging No Smoking.  It is now so obvious.  When I changed seats at Rotary in the early ‘60s to move away from second hand smoke I had no idea how important was each and every move.

I doubt that I touched a cigarette, ever.  My father abandoned cigars eventually and in the meantime didn’t light up around us due to complaints about “the odor.”   Anyway, my smoking friends are all deceased, everyone.  It is no coincidence.  Sad.  Cause and effect?

This body of mine looks about the way it should, but really it is better.  I took real, no kidding, real barbell  weightlifting deadly serious in spring, 1941 as we worriers  thought war was around the corner for my age group.  I learned and did the snatch, press, clean and jerk, and dead lift.  A few years earlier I had been a high school tennis player of ability (Duke offered a scholarship--refused), and I won five victories in a row as an intermural baseball pitcher; I adored swimming. I surf casted from childhood during long summers.

With a few exceptions, it was one drink before dinner, and that was it.  In diet: lots of fresh and salt water fish; crab; poached eggs; meat—but no fetish; salads and vegetables “if I must.” But:  in later life, bananas, and lots of grapefruit shipped in from Texas and/or Florida, and even at the store in bottles out of season.

After a real, no kidding heart infarction (attack) in 1977 there was pretty long companionable walking in our Ashland, Oregon hills. There was always a large dog to demand that we go:  rain or snow! In late retirement, I sought out  a two-way exercise machine in our place; I have long given it a daily 20 minute workout, tension on full, with both arms and legs involved. I just ignore ancient advice: “Don’t exercise before or after a meal.”  Think it bogus.

I confess there has been one of three different heart pills only once a day for over thirty years, prescribed by “the Best.” Since I was inheritor of an oddity, I long since had a pacemaker installed in my right shoulder; I am on my third as I write.  They keep heartbeats above 60, night and day.

Anything else?  I’m in bed, mostly asleep, 10:30 PM to 7:30 AM, nightly.  Little change.  I live, eat, and behave normally—I do think. In an earlier decade I was in a terrible one car auto wreck  at over 70 mph.  Then I was the victim of a freak accident that broke  open my left femur its whole length—forcing a form of incarceration nearly four months.

But: I had a 30 ft. above ground swimming pool for over 30 years and gave it the use it was sold for, relying on a battery of solar panels tp extend the season.  Great!

For all I know I could be deceased tonight or next week.  I am, after all, 101 and four months.  Ambulatory, I am unsteady; have had eyelid operations; hearing OK but unsharp just a bit. Skin not what it was. Still have nice cuttable hair on my head.  No fingerprints left!  Feet learning numbness; let’s wish them well.  Care to trade?  More sensitive to pepper than you.  Use potassium instead of salt; fake sugar in packets; on advice of one with a Ph.D. in “Nutrition” at the VA, eat minimum bread.  Fast typist, but lean on the keyboard now and then and swear under my breath. My daily showers are half pleasure; half obligation.

I have three mid-life ladies who work with me on sink, bedding, computer, good humor every day, two hours. All help with the computer.  I play my cornet for them (psalms, fight songs, those once popular kid songs) by ear. I learned to play in 7th grade; abandoned it until 95; started again, having fun.

Why in the world did I write this article instead of doing something else?  Well, around me where I reside are a number of older males and females who are starting to push 100 just a bit,  and some are well over that.  Somebody may want to read it! And my sense of obligation is well developed, especially when I am pretty sure I can extend their life of chatting and musing maybe more than a few months!

LONG LIFE MAY BE GOTTEN, that is, if you want to have it.  This lifetime Research Historian born in 1917 wishes you well, and does hope you get what you want out of the rest of your hopefully happy life.