Do We Really Need Billionaires?

Dr. Lawrence Wittner (http://www.lawrenceswittner.com) is Professor of History emeritus at SUNY/Albany and the author of Confronting the Bomb (Stanford University Press).] 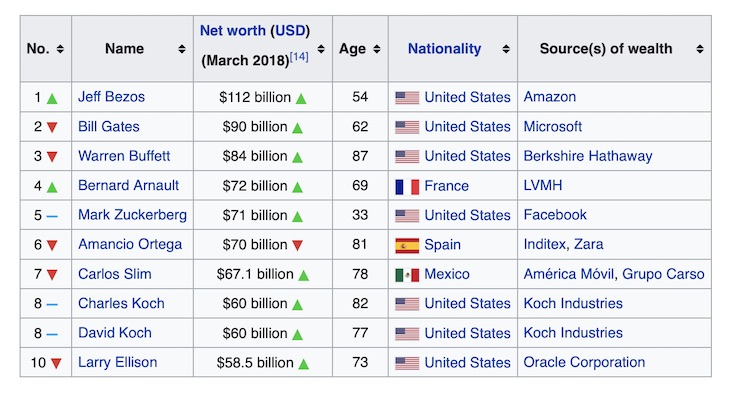 According to numerous reports, the world’s billionaires keep increasing in number and, especially, in wealth.

In March 2018, Forbes reported that it had identified 2,208 billionaires from 72 countries and territories.  Collectively, this group was worth $9.1 trillion, an increase in wealth of 18 percent since the preceding year.  Americans led the way with a record 585 billionaires, followed by mainland China which, despite its professed commitment to Communism, had a record 373. According to a Yahoo Finance report in late November 2018, the wealth of U.S. billionaires increased by 12 percent during 2017, while that of Chinese billionaires grew by 39 percent.

These vast fortunes were created much like those amassed by the Robber Barons of the late nineteenth century.  The Walton family’s $163 billion fortune grew rapidly because its giant business, Walmart, the largest private employer in the United States, paid its workers poverty-level wages.  Jeff Bezos (whose fortune jumped by $78.5 billion in one year to $160 billion, making him the richest man in the world), paid pathetically low wages at Amazon for years―until forced by strikes and public pressure to raise them. In mid-2017, Warren Buffett ($75 billion), then the world’s second richest man, noted that “the real problem” with the U.S. economy was that it was “disproportionately rewarding to the people on top.”

The situation is much the same elsewhere.  Since the 1980s, the share of national income going to workers has been dropping significantly around the globe, thereby exacerbating inequality in wealth.  “The billionaire boom is . . . a symptom of a failing economic system,” remarked Winnie Byanyima, executive director of the development charity, Oxfam International.  “The people who make our clothes, assemble our phones and grow our food are being exploited.”

As a result, the further concentration of wealth has produced rising levels of economic inequality around the globe.  According to a January 2018 report by Oxfam, during the preceding year some 3.7 billion people―about half the world’s population―experienced no increase in their wealth.  Instead, 82 percent of the global wealth generated in 2017 went to the wealthiest 1 percent.  In the United States, economic inequality continued to grow, with the share of the national income drawn by the poorest half of the population steadily declining.  The situation was even starker in the country with the second largest economy, China. Here, despite two decades of spectacular economic growth, economic inequality rose at the fastest pace in the world, leaving China as one of the most unequal countries on the planet.  In its global survey, Oxfam reported that 42 billionaires possessed as much wealth as half the world’s population.

Upon reflection, it’s hard to understand why billionaires think they need to possess such vast amounts of money and to acquire even more.  After all, they can eat and drink only so much, just as they surely have all the mansions, yachts, diamonds, furs, and private jets they can possibly use.  What more can they desire?

When it comes to desires, the answer is:  plenty!  That’s why they drive $4 million Lamborghini Venenos, acquire megamansions for their horses, take $80,000 “safaris” in private jets, purchase gold toothpicks, create megaclosets the size of homes, reside in $15,000 a night penthouse hotel suites, install luxury showers for their dogs, cover their staircases in gold, and build luxury survival bunkers.  Donald Trump maintains a penthouse apartment in Trump Tower that is reportedly worth $57 million and is marbled in gold.  Among his many other possessions are two private airplanes, three helicopters, five private residences, and 17 golf courses across the United States, Scotland, Ireland, and the United Arab Emirates.

In addition, billionaires devote enormous energy and money to controlling governments. ”They don’t put their wealth underneath their mattresses,” observed U.S. Senator Bernie Sanders; “they use that wealth to perpetuate their power.  So you have the Koch brothers and a handful of billionaires who pour hundreds of millions of dollars into elections.”  During the 2018 midterm elections in the United States, America’s billionaires lavished vast amounts of money on electoral politics, becoming the dominant funders of numerous candidates.  Sheldon Adelson alone poured over $113 million into the federal elections.

This kind of big money has a major impact on American politics.  Three billionaire families―the Kochs, the Mercers, and the Adelsons―played a central role in bankrolling the Republican Party’s shift to the far Right and its takeover of federal and state offices. Thus, although polls indicate that most Americans favor raising taxes on the rich, regulating corporations, fighting climate change, and supporting labor unions, the Republican-dominated White House, Congress, Supreme Court, and regulatory agencies have moved in exactly the opposite direction, backing the priorities of the wealthy.

With so much at stake, billionaires even took direct command of the world’s three major powers.  Donald Trump became the first billionaire to capture the U.S. presidency, joining Russia’s president, Vladimir Putin (reputed to have amassed wealth of at least $70 billion), and China’s president, Xi Jinping (estimated to have a net worth of $1.51 billion).  The three oligarchs quickly developed a cozy relationship and shared a number of policy positions, including the encouragement of wealth acquisition and the discouragement of human rights.

Admittedly, some billionaires have signed a Giving Pledge, promising to devote most of their wealth to philanthropy.  Nevertheless, plutocratic philanthropy means that the priorities of the super-rich (for example, the funding of private schools), rather than the priorities of the general public (such as the funding of public schools), get implemented.  Moreover, these same billionaires are accumulating wealth much faster than they donate it.  Philanthropist Bill Gates was worth $54 billion in 2010, the year their pledge was announced, and his wealth stands at $90 billion today.

Overall, then, as wealth is concentrated in fewer and fewer hands, most people around the world are clearly the losers.