Why Is the Middle East Studies Association Trying to Stop the Online Publication of Islamic State Documents? 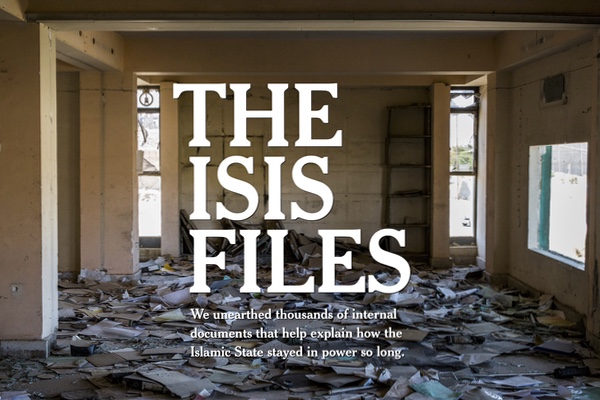 Why would the Middle East Studies Association (MESA), the primary umbrella organization for the field of Middle East studies, oppose the New York Times partnering with George Washington University (GWU)’s Program On Extremism to produce a public archive of the thousands of Islamic State (ISIS) documents the newspaper retrieved from northern Iraq?

Analysis based on solid evidence, after all, is far superior to speculation and guesswork that may be proven erroneous. While there are many media articles about ISIS and propaganda material from the group itself, there is a deficiency of internal documents in the open-source realm for researchers to use in order to understand the inner workings of ISIS’s state project during the peak of its power.

I have a personal stake in this debate: as a researcher of Iraqi origin, I have aimed to help scholars and others with my own archive of over 1,000 ISIS documents. My work inspired Times correspondent Rukmini Callimachi, who obtained the collection for the newspaper, and I helped her verify many of the documents in question.

Yet MESA has launched self-righteous fulminations against the Times and Callimachi. Initially, it sent a letter to the paper criticizing it for referring to the documents in its articles, declaring that creating a public database of them is “unacceptable,” and insisting the documents be returned immediately to “the appropriate Iraqi authorities.” After the Times and GWU’s Program on Extremism announced their partnership, MESA sent a letter to GWU dubbing the project “problematic” and repeating its opposition to an open access database.

While MESA’s letters raised a legitimate point about the need to redact names of civilians from the documents, its main critique revealed deep-seated anti-Western biases. The Western identity of the reporter, newspaper, and institution working on the documents were unacceptable. MESA went so far as to characterize Callimachi’s obtaining the documents as a pillaging of cultural heritage in violation of international law, because “only legally designated representatives of the Iraqi state” should “control the disposition of any documents.” Similarly, MESA objected to the paper’s plans to create a public database of the documents partly because there are “no clear plans to return them to a repository that will be accessible to all Iraqis.”

MESA’s narrative is simplistic and short-sighted and unjustly implies that the Times engaged in criminal activity. There have been no “legally designated representatives” of state entities in the field to authorize or reject the collection of ISIS documents by journalists. In Northern Iraq, the de facto authority was the Iraqi security forces with whom the Times’s reporter was embedded. On occasion those forces granted permission to take papers simply because they did not deem them vital for intelligence efforts. Documents listing names of ISIS personnel, for instance, are of far more interest to security forces than those outlining the structure of a dismantled ISIS bureaucracy in a liberated area. Furthermore, some documents would have been destroyed had there been no third-party interest in collecting them. In other instances, documents were recovered from locales and buildings that had otherwise been overlooked. Were it not for the New York Times’s efforts, those documents would likely have been lost forever.

In my case, I collected as many ISIS documents as possible from the group’s former zone of control in the North Aleppo countryside in Northern Syria. That area is now controlled by local Syrian rebels under a Turkish occupation force. Should I give my collection to the Syrian government in Damascus, or perhaps the Turkish government in Ankara?

It is unclear how MESA thinks a repository accessible to all Iraqis will be created if there is no publicly accessible online database. Owing to the outcry from MESA and others, the paper is giving the original documents to the Iraqi government, at the latter’s request. Yet we are not dealing with a government known for bureaucratic efficiency. Beset with problems such as reconstruction in liberated areas and protests in the south against poor public services, the Iraqi government is very unlikely to create a repository of ISIS documents accessible to all Iraqis.

An open-access online database addresses this problem, yet MESA decries this obvious solution. Why should the study of these documents online be restricted? Considering the enormous media attention their fate has garnered, why should the general public be denied the right to examine the materials to determine for themselves how sound the original reporting and analyses were?

MESA should drop its affectation of moral superiority and carefully examine the documents for itself so as to pose legitimate research questions. Did the Times, for instance, select certain documents to support favored conclusions? Was the paper taking the documents too much at face value? These and other important questions can be addressed only by a transparent and open debate. But MESA would rather restrict access to a privileged elite of researchers, as was the case with the Ba’ath Party documents taken from Iraq after 2003.

It is unlikely MESA would have protested had a regional Middle Eastern news outlet taken the ISIS documents from Iraq and reported on them. (Their failure to protest my own work also illustrates this selective outrage.) MESA’s real objection is that a Western outlet tracked down the documents and published the reports—an intellectually vacuous form of identity politics reflecting MESA’s biases that have gained far too much currency in academia. However MESA spins it, the Times and Callimachi have greatly contributed to our ability to research the history of ISIS. The planned public archive of documents will only strengthen that contribution.