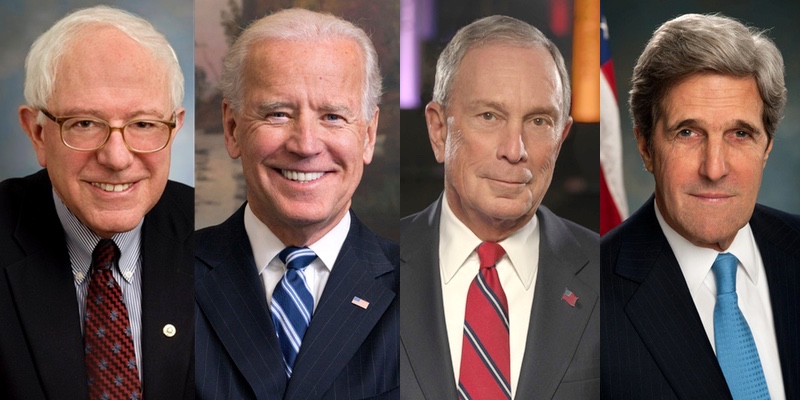 Presently, we have the oldest first term inaugurated President of the United States, Donald Trump, who was inaugurated at 70 years and a bit more than seven months old in January 2017.

Only two other Presidents have been in office in their 70s. Ronald Reagan was inaugurated a few weeks short of age 70 in 1981, and left office a few weeks short of 78 in 1989. Dwight D. Eisenhower reached the age of 70 in October 1960, leaving office three months and six days after his 70th birthday.

One potential candidate, seen as certain to run again, is Vermont Senator Bernie Sanders, who fought Hillary Clinton all the way to early summer in 2016. An Independent Socialist, who allies with the Democratic Party, Sanders has given very strong hints of trying again, and he would be 79 years, four months and twelve days old on Inauguration Day in 2021. So he would reach the age of 80 in the first year of his term. Sanders has had an extended career in Congress, as the longest serving Independent in history in the House of Representatives for sixteen years from 1991 to 2007, and is now seen as an easy victor in a third term bid for the US Senate. He also served as Mayor of Burlington, Vermont from 1981 to 1989. He has a lot of support, particularly among young people, who flocked to his campaign in 2016. He will certainly be a major factor in the 2020 Presidential election cycle.

The second potential candidate, flirting with the idea of running, is former New York City Mayor Michael Bloomberg, who served three terms from 2002-2014. Bloomberg was a Democrat before the Mayoral years, ran for office as a Republican, and then became an Independent in the midst of his second term in office in 2007. He is seen as a man who avoids clear party identification, but could certainly run as a Democratic competitor. He is the 8th richest person in America and the 11th richest in the world, and has unlimited funds to mount a campaign for President. He flirted with the idea of running as an Independent in 2008 and 2012, and after some thought of running finally in 2016, he endorsed Hillary Clinton. He is now spending $80 million in the midterm elections of 2018 to support Democratic congressional candidates, to help flip control of the House of Representatives. He has long engaged in philanthropy, and is seen as a “wild card” who might finally run for President after earlier decisions not to do so. If he were to become President, he would be 78 years, 11 months and six days old upon taking the oath of office, and therefore, would reach the age of 80 a little more than a year after becoming President.

The third potential candidate, seen as certain to announce for President, and the front runner in many polls, is former Vice President Joe Biden, who served eight years under President Barack Obama, and had a 36 year career as a Senator from Delaware from 1973-2009, including service as Chairman of the Judiciary Committee from 1987-1995, and also Chairman of the Senate Foreign Relations Committee from 2001-2003 and 2007-2009. Biden was in many ways the most active and engaged Vice President in American history, even more than Walter Mondale under President Jimmy Carter.

Biden tried for the White House twice, in 1988 and 2008, doing poorly each time, and was forced out of the earlier race after he plagiarized a speech by a British politician. He also suffered a serious health crisis as a result of an aneurysm of the brain, which his son Beau Biden later endured, and who then died of cancer in 2015. Biden had been planning to run in 2016, but backed off after his son’s tragic death. It is believed by many observers that he would have been able to overcome Hillary Clinton and Bernie Sanders in 2016, win the Democratic nomination, and defeat Donald Trump, by winning the white working class vote of Pennsylvania, Michigan, Ohio, and Wisconsin. This has motivated Biden to run, and many people of all political stripes, even those who would work against him, feel he is qualified considering his 44 years in government service. No other person who has run for president has a longer record of public service. Biden would become 78 years of age two weeks after the election, and would be 78 years and exactly two months old on Inauguration Day 2021, so he would reach the age of 80 after one year and ten months in office.

Also, John Kerry, former Democratic Senator, Secretary of State, and 2004 Presidential nominee, has now promoted his new book on his career, and rumors are flying, which Kerry is not discouraging, that he might enter the race for President in 2020, despite the fact that he ran for President nearly a generation ago.

Considering that Kerry lost his race to George W. Bush, due to a contested result for the Ohio electoral vote, which had it switched would have given him the Presidency despite losing the national popular vote, it is not beyond the realm of possibility that Kerry might actually announce for President after the midterm election results of 2018 are completed. Kerry would reach the age of 80 in December 2023 during the next Presidential term. He would be the “youngest” of these four potential Democratic Presidential candidates in 2020.

One can be certain that both Sanders and Biden will compete in 2020, but with the possibility that Bloomberg and Kerry might join. It is conceivable that all four will compete, along with a large slew of much younger candidates, including a list of seven potential candidates, who if inaugurated, would all be younger than our youngest President, Theodore Roosevelt, and our youngest elected President, John F. Kennedy.

In 2020 therefore we may see an election pitting candidates at both extremes of the age range.