They Ran for President Before. Will They Run Again in 2020? 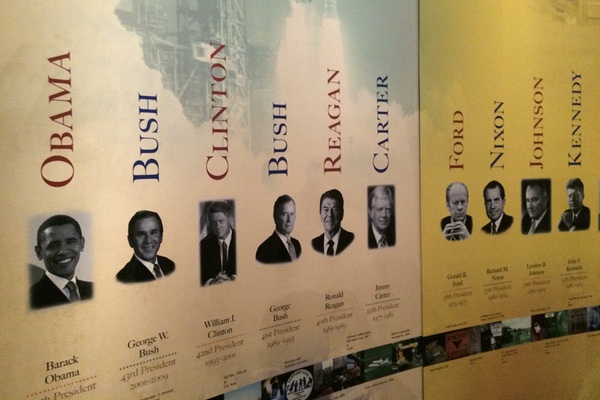 America has seen about one third of its Presidents who were “retreads,” those who lost earlier bids for the White House. They span from Thomas Jefferson to Donald Trump, and this reality of later success is what emboldens others to continue attempting to be elected President. There will be a number of such “retreads” likely to seek the Presidency in 2020.

Thomas Jefferson lost the Presidency to John Adams in 1796, the first contested presidential election, but after serving as Vice President under Adams, before the 12th Amendment was adopted in 1804, he was the opponent of John Adams in 1800, and won in a contested election, where his own Vice Presidential running mate, Aaron Burr, tried to steal the election from Jefferson in the House of Representatives, necessitating the new amendment to resolve the issue for future elections.

James Monroe competed in the Democratic-Republican Congressional Caucus method of selecting Jefferson’s successor, but lost to James Madison in 1808, but later reconciled with Madison, served as his Secretary of State, and then succeeded Madison in the election of 1816.

Andrew Jackson won more popular votes and more electoral votes than John Quincy Adams in 1824, but lost the four way race in the House of Representatives, called it a “corrupt bargain,” and then defeated Adams in the election of 1828.

William Henry Harrison competed against Martin Van Buren in 1836, but after losing that election, he triumphed over Van Buren in 1840 in the midst of the effects of the Panic of 1837.

James Buchanan was a competitor in three presidential elections, in 1844, 1848 and 1852, but finally won the nomination of the Democratic Party, and the Presidency, in the election in 1856.

Andrew Johnson tried for the Democratic Presidential nomination in 1860, and later agreed to run on a fusion Union ticket with Republican Abraham Lincoln in 1864, and became President upon the assassination of Lincoln, but was really a man without a party while in the White House, and could not gain the nomination of any party in 1868.

After Andrew Johnson it would take 60 years for a Presidential “retread” to win, when Herbert Hoover, who was “available” for the 1920 Republican Presidential nomination, and had then served as Warren G. Harding’s and Calvin Coolidge’s Secretary of Commerce for eight years, won the Presidency in 1928.

Dwight D. Eisenhower was offered the Democratic Presidential nomination by President Harry Truman in 1947, at a time when it seemed highly unlikely that Truman could win the nomination and election, after succeeding Franklin D. Roosevelt, who died less than three months into his fourth term in the White House. Eisenhower turned down the offer, showed no interest in becoming involved in politics, but early in 1952, he was “drafted” by Massachusetts Republican Senator Henry Cabot Lodge, Jr. to compete against conservative Ohio Senator Robert Taft for the nomination, won in the convention, and went on to two terms as President.

Lyndon B. Johnson challenged front runner John F. Kennedy in the days leading up to the 1960 Democratic National Convention, then agreed to be JFK’s Vice Presidential running mate, and then became President upon Kennedy’s assassination in 1963. He then proceeded to win the most massive popular vote percentage of any President in American history, although he later dropped out of the race in 1968, due to the division in the nation over the Vietnam War.

Richard Nixon lost a closely contested election to John F. Kennedy in 1960, and then made an heroic comeback in 1968, and won a second term in 1972 by a massive landslide over Democratic Senator George McGovern.

Ronald Reagan was an announced candidate in 1968, when Nixon won the nomination and election, and then mounted a major challenge to President Gerald Ford in 1976, losing the presidential nomination by fewer than 100 Republican National Convention delegates. He then won the Presidency in 1980, despite the fact he was nearing the age of 70, and won a massive reelection landslide over former Vice President Walter Mondale in 1984.

George H. W. Bush competed with Ronald Reagan for the Republican presidential nomination in 1980, and then agreed to be his Vice Presidential running mate. He then won the nomination in 1988, and won one term in office, later defeated for reelection in 1992 by Bill Clinton.

Bill Clinton flirted with running for the Democratic presidential nomination in 1988, but never followed through, but then competed for the nomination in 1992, won the election, and served two terms as President.

Donald Trump flirted with the idea of running for the Reform party nomination in 2000, after spreading rumors he might run as a Democrat as early as 1988. Then, there were hints that he might run in 2012, after speaking at the Conservative Political Action Conference in 2011. But he ended up delaying such a campaign until June 2015, when he announced for the 2016 Republican presidential nomination.

Now, as we look ahead to 2020, there are a number of potential “retreads” who seem likely to pursue the Presidency.

On the Democratic side, former Vice President Joe Biden, who sought the Presidency in 1988 and 2008, seems certain to run, and the odds of him being the nominee seem quite good at this distant point, a year and a half before the Iowa Caucuses and the New Hampshire Primary.

Vermont Senator Bernie Sanders, after giving Hillary Clinton a very competitive race for the nomination in 2016, also seems certain to pursue the nomination again in 2020.

Also, former Maryland Governor Martin O’Malley, after a lackluster campaign for President in 2016, seems likely to try again for the Presidency.

There are also rumors that four other Democrats might seek the Presidency, although the odds of this happening, and even more so with success, are small. These four Democrats would include 2016 Democratic Presidential candidate Hillary Clinton; former Vice President Al Gore, who lost the Presidential Election of 2000; 2004 Presidential nominee John Kerry, most recently Secretary of State in the second term of President Barack Obama; and finally, three time candidate, California Governor Jerry Brown, who competed in 1976 against future President Jimmy Carter; in 1980 against President Carter; and then in 1992 against future President Bill Clinton.

On the Republican side, there are also numerous past competitors for the Presidency, who might seek to run again in 2020. There is also one former Republican contender, still alive, but certainly not running for another chance at the White House: former Kansas Senator Bob Dole (age 95).

Ohio Governor John Kasich, who sought the Presidency in 2000 and 2016, is considered highly likely to announce for President in 2019, and is seen as possibly the major threat to a second term nomination and election for Donald Trump.

Also, 2012 Republican Presidential nominee Mitt Romney, soon to be elected Utah Senator, after having been Massachusetts Governor more than a decade ago, is also seen as a possible challenger to Trump for the 2020 nomination.

Former Utah Governor and presently US Ambassador to Russia, Jon Huntsman, who tried for the Republican nomination in 2012, could also possibly resign soon, and decide to challenge for the 2020 race, as it is believed that he is uncomfortable working for Donald Trump.

Other possible challengers who competed for the White House in the past, include former Florida Governor Jeb Bush; Florida Senator Marco Rubio; Kentucky Senator Rand Paul; and, if he wins reelection this November, Texas Senator Ted Cruz, all of whom ran for president in 2016.

So in theory, there are seven Democrats and seven Republicans who have competed for President in past races for the White House, who would love to join the 14 Presidents who also had to work hard and try again for the Presidency after inability to win the office on their first try.

So there will be no lack of interest or attention as at least some of this group of 14 political leaders attempt to become the 15th person to make a comeback after losing or giving up their first try at winning residency in the White House.