Donald Trump Was the Oldest Elected President in History in 2016. Are We Ready to Elect the Youngest President in 2020? 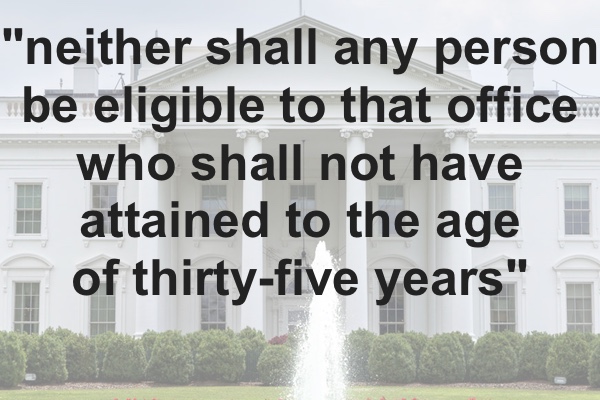 The possibility now exists that up to seven Democrats who are younger than our youngest President, Theodore Roosevelt, and our youngest elected President, John F. Kennedy, may compete for the 2020 Democratic Presidential nomination. If any one of these seven were to be the nominee, such an individual would join three other past Presidential nominees in American history, who would have taken the oath of office at an age younger than TR and JFK.

First, let us look at the three past Presidential nominees who lost their races for the White House.

John C. Breckinridge of Kentucky was our youngest Vice President at age 36, but actually running for the office when still 35 in 1856. President James Buchanan was quite ill on Inauguration Day, and almost did not give his Inaugural Address on March 4, 1857, apparently due to intestinal troubles from disease spread by sewage in the nation’s capital, and it took two weeks for him to recover. Had Buchanan passed away, we would have had a President at the age of 36. Instead, however, in 1860, at age 39, Breckinridge ran for President as a Southern Democrat, a breakaway from the Democratic Party nomination of Illinois Senator Stephen Douglas. Breckinridge won eleven Southern and Border states, and placed second in electoral votes to Abraham Lincoln with 72, and gained 18.1 percent of the total popular vote. He became involved in the Confederate military during the Civil War, served briefly as Confederate Secretary of War, then fled overseas until granted amnesty by President Andrew Johnson in 1868, returning to America in early 1869.

Former Nebraska Congressman William Jennings Bryan was 36 when he was the Democratic Presidential nominee in the Presidential Election of 1896, the youngest nominee in American history. His oratory swayed the convention to reject the mainstream Democratic Party represented by outgoing Democratic President Grover Cleveland. Bryan was 40 when he ran a second time for President in the Presidential Election of 1900, losing for the second time to William McKinley. Bryan began the concept of modern Presidential campaigning, when he traveled thousands of miles by rail and spoke to millions of supporters who flocked every rail station along much of the nation east to west, becoming regarded as one of the greatest political orators of all time. His nickname was the “Silver Tongued Orator.” But his support in the Midwest and Great Plains and the traditional Democratic South were not enough either in 1896 or 1900, or again in 1908 against William Howard Taft when Bryan was 48 (still a young Presidential candidate). He would go down as one of the three time losers of the Presidency, along with Henry Clay.

Thomas E. Dewey, later Governor of New York, was actually a front runner for the Republican Presidential nomination in 1940, when he was only 38, having gained great attention fighting Organized Crime as Manhattan District Attorney, and having lost a close race for Governor of New York in 1938 at age 36. Dewey was harmed in 1940 by his clearly isolationist stand regarding the ongoing World War II in Europe and Asia, particularly the Nazi takeover of most of Europe, including France, and the bombing of London and attempted blockade of Great Britain by Germany. But in 1944, at age 42, and after being elected New York Governor in 1942, Dewey lost the Presidency to Franklin D. Roosevelt, who was seeking his fourth term, at a time when the Second World War was at its turning point following D Day. Dewey only won 12 states and 46 percent of the popular vote and 99 electoral votes against FDR, primarily in the Great Plains, portions of the Mountain West, a few states in the Midwest, and portions of New England, even losing his home state of New York. Had he won Dewey would have been a few weeks younger than TR when he took the oath of office in 1901.

Dewey went on, at age 46, to be the Republican nominee again in the Presidential Election of 1948, when he was heavily favored to win against President Harry Truman, but suffered the famous upset of all election polls being totally inaccurate, as Truman surprised everyone, except himself, and won a sound victory, with Dewey winning fewer popular votes and a smaller percentage of the total vote than in 1944, a totally unpredictable result, which forced the complete reorganization of polling methods to avoid such an embarrassment and disaster in the future. Dewey continued to serve as the Governor of New York until the end of 1954, but his national political career was over.

Now, news reports indicate four members of the House of Representatives; one Mayor and one seeking to win the mayoral office; and one businessman with no political experience, are rumored or are known to be considering a Presidential run, with all of them being younger than TR or JFK.

In order by age, oldest to youngest, they are:

Congressman Seth Moulton of Massachusetts. He would be 42 years and three months old on Inauguration Day. He has served in Congress since 2015, and had four tours of duty as a Marine in the Iraq War from 2003-2008. He is a member of the New Democrat Coalition, a congressional caucus that promotes a moderate, pro growth, and fiscally responsible agenda. He has encouraged speculation that he might seek the Presidency in 2020.

Congressman Joe Kennedy III of Massachusetts. He would be 40 years and three and a half months old on Inauguration Day, more than three years younger than his great uncle, John F. Kennedy. He is also the grandson of Robert F. Kennedy. He served in the Peace Corps for two years in the Dominican Republic, and gave the response to the State of the Union Address in January, 2018. He has served in Congress since 2013, and has been discussed as a potential Presidential candidate, and also linked with former Vice President Joe Biden as a possible Vice Presidential running mate in 2020. He has been very outspoken on liberal and progressive goals, and he has inspired many as a candidate who could unify young and old of all backgrounds.

Congressman Eric Swalwell of California. He would be 40 years and two months old on Inauguration Day. He has served in Congress since 2013. An important and influential figure on the House Intelligence Committee, investigating Russian collusion in the Presidential Election of 2016, he has served as co-chair of the Democratic Steering and Policy Committee in the House of Representatives. He is often on cable news, and he has shown up in Iowa, fueling the idea that he might announce for President in 2020.

Congresswoman Tulsi Gabbard of Hawaii. She would be 39 years and nine months old on Inauguration Day. She has served in Congress since 2013, and was a Vice Chair of the Democratic National Committee until she resigned in February 2016, when she endorsed independent Senator Bernie Sanders for the Democratic Presidential nomination. She served in a field medical unit of the Hawaii Army National Guard in a combat zone in Iraq in 2004-2005. She is the first Samoan American to serve in Congress, and is its first Hindu member. She has unorthodox political views within her party, and is very outspoken on many issues, and has served on the House Armed Services Committee and the House Foreign Affairs Committee.

Jason Kander, the former Missouri Secretary of State from 2013-2017, and the losing Democratic nominee for the Senate in 2016 against Republican Senator Roy Blunt. He would be 39 years and eight months old on Inauguration Day. He was an intelligence officer for the Army National Guard from 2002-2011, achieving the rank of captain, and served in Afghanistan. He was also a member of the Missouri House of Representatives from 2009-2013. He is presently a candidate for the mayoralty of Kansas City, Missouri, with the election in June 2019. He has spent time in the early primary states of Iowa and New Hampshire, and has also been a commentator on cable news programs, adding to his public exposure.

Pete Buttigieg, the Mayor of South Bend, Indiana since 2012, now in his second term. He would be 39 years and one day old on Inauguration Day. A Harvard graduate and Rhodes Scholar, he was commissioned as a Naval Intelligence Officer in the Naval Reserves in 2009, and deployed to Afghanistan in 2013, reaching the level of Lieutenant. He campaigned for the chairmanship of the Democratic National Committee in 2017, but withdrew his candidacy before the vote was taken. But he drew attention, and has been considered a possible candidate for the Presidency in 2020, and would be the first openly gay President if he were elected.

Finally, there’s Mark Zuckerberg, the technology entrepreneur, philanthropist, and founder and CEO of Facebook, with no government experience. He would be 36 years and eight months old on Inauguration Day, and would be the youngest Presidential nominee ever, three and a half months younger than William Jennings Bryan in 1896. He is one of the top few wealthiest people in the world, and at his young age, has become a center of controversy over the power and influence of Facebook in the social media world, and possible Russian collusion and interference in the Presidential Election of 2016. He has spent a lot of time holding meetings with ordinary Americans in many of the 50 states, which has fueled speculation that he might seek the Presidency. He would be just 20 months older than the constitutional limit of 35 at the time of the next Presidential inauguration.

Of these seven potential candidates of a very young age, the one most likely to win would be Joe Kennedy III, who has the advantage of a famous last name. If elected he would be the first Congressman in 140 years to win the presidency. (The winner then was James A. Garfield, who had served in the House for a much longer period of time).

For a mayor such as Buttigieg, or a potential mayor as Kander, to manage to become the nominee, is unheard of. No person has ever gone directly from mayor to president. Other mayors who are older, including Eric Garcetti of Los Angeles, or Mitch Landrieu of New Orleans, would have a better chance.

Most likely the next election will bring a President who’s much younger than Donald Trump. History favors someone in their mid 40s to the early 60s.