India’s Cities Have an Ecological Crisis.  A Historian Knows How They Got There.

Harini Nagendra, PhD., is Professor of Sustainability, Azim Premji University, Bangalore, India. She is the author of Nature in the City: Bengaluru in the Past, Present and Future (Oxford University Press India, 2016). You can follow her on Twitter at @HariniNagendra. 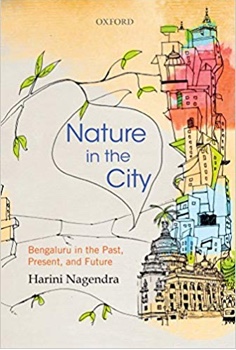 India is facing the worst water crisis it has ever encountered, as highlighted by a recent report by the Niti Aayog (a prominent Government of India policy think tank). A number of Indian cities likeSimla, Bangalore and Chennai are facing a future without assured water supply. Water shortages are not the only environmental challenge confronting Indian cities, affecting the daily lives of millions of people. Air pollution has reached stratospheric levels in many Indian cities. Data from the World Health Organization shows that India contains 14 of the world’s 20 most polluted cities (based on analyses of fine particulate matter, PM2.5). In mid-June in Delhi, particulate matter (PM10) levels, exacerbated by a regional dust storm, exceeded permissible limits by a factor of 26! Flooding is another risk frequently faced by many Indian cities like Mumbai– which may, ironically, experience conditions of drought in the summer and flooding in the monsoon.

A complete disregard of the importance of urban ecosystems – wetlands, forests, lakes, rivers, woodlots and even scattered street trees – has led to the dire situation in which India’s cities find themselves. Poised at the brink of an urban explosion, India’s small towns, cities and megapolises face a common challenge – the disruption of a once close connection with nature, and a rush to build on and concretize every available square foot of land, without considering the implications for long-term survival and well-being.

In the pre-colonial period, inscriptions and archival datasets document the gradual settlement and conversion of a semi-arid, dry and dusty landscape into a fertile agro-pastoral region with a thriving market economy, via the construction of irrigation reservoirs (tanks and lakes) and the planting of irrigated crops and fruit orchards.

Inscriptions from the pre-colonial period are testament to the importance that local residents accorded to the shade provided by trees, and the water drawn from wells. For instance one inscription, from 1250 CE, records a land grant from the village of Agrahara near Yelehanka, and describes the landscape as “including the trees overground and the wells underground.” Such descriptions, frequently found, attest to an intimate relationship with nature in which settlers were keenly aware of the importance of having access to life-giving water and shade in a dry semi-arid landscape, far from major rivers and distant from the coast. Trees and lakes were worshipped as sacred as well as protected for their utility, with inscriptions documenting provision of village revenues for local gods and goddesses.

During the early part of the colonial period, tree plantation and the creation of new irrigation reservoirs continued to be assiduously encouraged. Until the late 19th century, a number of new lakes were dug in various parts of Bangalore, to provide water to new extensions of the city. Trees were planted in the tens of thousands as well, providing colonial settlers and Indian residents alike with relief from the harsh tropical overhead sun. Yet there was a change in the type of relationship observed with nature. From viewing ecosystems as sacred (to be worshipped) and simultaneously utilitarian (producing water, fish, fruits and fodder), nature became primarily viewed through a lens of beauty, aesthetics, and recreation. The trees brought in by British horticulturalists were primarily exotic, and ornamental – such as the rain tree (Albizia saman, from the neotropics), copper pod (Peltophorum pterocarpum, from southeast Asia) and African tulip (Spathodea camapnulata, from the African tropical dry forests). These trees were primarily ornamental, selected for their capacity to grow fast, and produce beautiful flowers.

In contrast, trees planted by Indian residents were largely native, or species with local cultural significance, such as the multifunctional coconut (Cocos nucifera), the medicinal neem (Azadirachta indica), or the fruiting mango (Mangifera indica). Lakes and storm water channels, once used for activities as diverse as fishing, grazing, mud-brick making, clothes laundry, domestic needs, farming and horticulture were converted into stone-pitched, landscaped water bodies, with walking tracks and ornamental plants.

Further, using lakes for livelihood activities such as brick making or laundering clothes was considered unsightly, and lakes were protected by uniformed guards whose task it was to keep the area in accordance with the colonial aesthetic of beauty – one that excluded many native trees, as well as native settlers themselves, especially those from low income categories.

As a consequence of these changes, many of the original residents around lakes – including most especially the fishing and horticultural communities – moved out from the city center. By the early 20th century, with piped water reaching most of the city, lakes were no longer considered of importance for water supply. Lakes in the city center slowly began to dry out, since they were no longer maintained. Trees on the other hand continued to be planted, but with a continued focus on ornamental varieties, useful in landscaping projects.

In the early post-colonial decades, Bangalore maintained a link with nature via tree plantation that largely conformed to the colonial aesthetic. Indian horticulturalists, trained by British and German experts during colonial times, ably planted trees and passed on their ideas of plantation to their successors. Bangalore continued to live up to its name as one of the greenest cities of India. Post economic liberalization, when Bangalore became a favored location for Information Technology and Business Process Outsourcing companies, the city’s growth outstripped and ruptured its fondness for nature.

Land prices skyrocketed rapidly, and every square foot became valued mainly for the price it fetched. During the 1990s and thereafter, a number of lakes, wetlands, woodlots, wooded streets and even some of the city’s most iconic heritage parks lost land, fresh water coverage, and tree canopy to real estate and infrastructure projects. Road widening and transport infrastructure development lead to the reckless felling of several tens of thousands of trees. Promised compensatory tree planting projects never took off. In this period of urban growth, Bangalore seems to have completely lost all traces of its original knowledge of the importance of the water underground, and the trees overground.

Yet urban ecosystems are even more, not less important, in today’s dystopic urban scenario. Our research has shown that trees have a massive potential to contribute to a four-fold reduction in PM10 levels, bringing air pollution (on this indicator) in even the most polluted roads in Bangalore within permissible limits. Street trees can also decrease ambient air temperatures by 3-5°C, and road asphalt surface temperatures by 23°C, substantially reducing urban heat island effects, and increasing urban walkability. Lakes and wetlands are essential to store and recharge ground water at a time when Bangalore, a city highly dependent on ground water, is projected to be fast running out of drinking water supplies.

Through an ecological history of Bangalore over a span of 1200 years, my book, Nature in the City: Bengaluru in the Past, Present and Future, helps us understand how Indian cities have fundamentally altered their once intimate relationship with urban ecosystems, and seemingly lost all knowledge of their importance. While early settlers, planners and rulers improved the environmental quality of the city by digging wells, creating lakes, and planting trees, in recent years, city planners and municipal authorities have seemed bent on implementing a vision of “smart cities” with treeless wide roads and high-rise concrete buildings. Civic protests by residents in cities as far flung as Delhi, Mumbai, Salem and Bangalore seek to save the last remaining urban ecosystems, but face an uphill task, with green activists being shot at, arrested, or defamed as being “anti-development” and anti-national.

This is not just the story of Bangalore – the same pattern is true across Indian cities, and many cities of the global South as well – such from Bangkok to Cape Town, and Lagos to Sao Paolo. We need to restore an active public conversation around the importance of urban nature, for cities in the global South to be able to reclaim their urban ecosystems, enabling the hundreds of millions of urban residents living in fast growing cities to reclaim their environmental wellbeing and urban resilience.