New Zealand Is Giving Environmentalists a Reason to Be Hopeful

Dr Catherine Knight is an Honorary Research Associate at Massey University. Her book Beyond Manapouri: 50 years of environmental politics (Canterbury University Press, 2018) was released in May this year. Her previous books are New Zealand’s Rivers: An environmental history and Ravaged Beauty: An environmental history of the Manawatu. Catherine works as an independent policy and communications consultant and lives on a farmlet with her family in rural Manawatu (website). 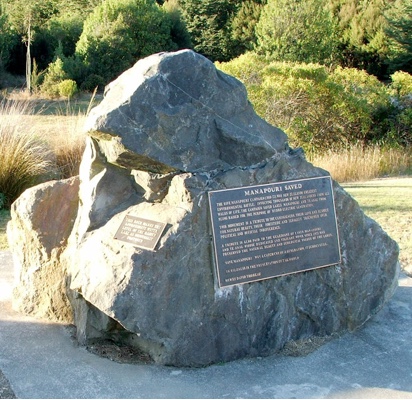 Monument to the Save Manapouri campaign in Manapouri, New Zealand

In the environmental sphere, people often talk of tipping points, the point at which the environment changes from one stable state to another new state, often abruptly, causing significant disruption. I believe that New Zealand could be on the cusp of a tipping point – not in the state of its environment, but rather, in terms of New Zealanders’ awareness of the gravity of environmental issues we face and the need to make meaningful interventions. 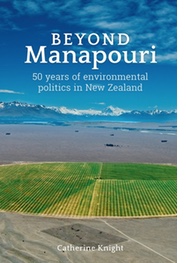 Despite its much vaunted ‘clean, green image’ (now somewhat tarnished by the scrutiny it has been subjected to both nationally and internationally, including by the BBC current affairs show Hard Talk), New Zealand faces some major environmental challenges. Many of our indigenous species of animals and plants remain under serious threat in spite of ongoing efforts to control introduced pests. Many of our rivers, lakes, streams and aquifers are under severe pressure, caused on the one hand by the discharge of a growing volume of pollutants into waterways, and, on the other, the increased extraction of water, mainly for intensive agriculture. Our response to climate change over the last quarter century has been characterized either by inaction (the wait-and-see approach) or potentially effective measures (such as an emissions trading scheme) considerably weakened by the tampering of subsequent governments. As in many western countries, past governments have been reluctant to alienate big industry – particularly the energy and resource extraction industries, and more recently the agricultural sector, which is still seen as the backbone of New Zealand’s economy.

But just in the last few years chinks of light have been starting to penetrate through the stubborn reluctance of successive governments to risk political power for the sake of the environment. Partly this is generational – the new leadership of both political parties are in their thirties and forties, and so represent a generational shift in which the environment is central to government policy rather than being seen as peripheral to the ‘real’ concern of economic prosperity. But there has also been a growing realization on the part of New Zealanders that environmental values that we hold dear, such as the ability to swim at our local swimming spot, or to drink water from the faucet without falling ill, are in jeopardy. There is also a growing recognition that there is in an inherent unfairness in ordinary New Zealanders shouldering the burden of environmental degradation (whether it be the cost of remediation of degraded environments or the reduced ability to enjoy the environment) while others profit from the exploitation of public goods such as fresh water.

Nevertheless, as a recently colonized nation, the pioneering mentality remains strong in New Zealand, where private property rights and personal freedoms predominate over values such as the collective good or social license. (By way of contrast, this writer is familiar with Japan, where rice farmers were traditionally compelled to cooperate with each other in order to guarantee an equitable and ongoing share of the limited freshwater resource, so vital to wet-rice agriculture.) For instance, when the government proposed a policy a few years ago to prevent landowners from removing or damaging areas of rare biodiversity such as wetlands or forest remnants on their land, there was an intense backlash from farmers in some regions, claiming that this was another land grab, and rather tenuously comparing it to the government’s confiscation of indigenous peoples’ land in the 1800s, an action later found to be in breach of New Zealand’s founding treaty. The proposal was subsequently abandoned.

In my recently published book, Beyond Manapouri: 50 years of environmental politics in New Zealand, I trace the history of environmental politics in New Zealand since the national campaign of 1969 to stop the government from raising the level of one of the country’s most scenically spectacular lakes, Manapouri. Without doubt, since that time, when environmental policy wasn’t even a “thing,” environmental governance in this country has progressed markedly. Whereas 50 years ago there was no government body dedicated to environmental issues, there are now three agencies with responsibilities in this area. And there is a body of law relating to environmental decision-making and governance, central to which is the Resource Management Act 1991, which was hailed internationally as ground-breaking at the time of its enactment. Furthermore, scientific knowledge, public awareness, and the public’s ability to participate in environmental decision-making have all grown exponentially.

But at the same time, environmental issues have grown significantly more complex, making them vulnerable to obfuscation – whether deliberate or inadvertent. This was manifest in the case of a government proposal in 2017 to make 90% of the country’s rivers and lakes swimmable by 2040. Following the announcement of the new policy, some of the country’s top scientists admitted that they were somewhat bamboozled by what was being proposed –in these circumstances, the general public had little hope of deciphering the techno-jargon and policy-speak. This has serious implications beyond this issue, because we cannot claim to have a healthy democracy when even informed and engaged sections of the public struggle to understand what the government is proposing to do to address an issue of such high public concern.

The signs of a growing impetus for meaningful change to address our most pressing environmental issues are tentative but nevertheless offer hope. In June this year, the leader of the more conservative opposition party (the National Party) announced that the party would support the government’s proposal to introduce a Zero Carbon Act and establish a Climate Commission, modeled on Britain’s, albeit with some not insignificant caveats. If the National Party holds to this commitment, then it will be the first time in recent history that there has been bi-partisan support for a major environmental policy. (In September 2017, a new coalition government was voted in, led by Labour leader Jacinda Adern, replacing the previous National government, which had been in power for nine years.

The government has also announced that it intends to introduce tougher regulations on agricultural land use to curb water pollution. Of course, this triggered the usual protests that ‘tougher regulation is not necessary – farmers are already doing lots of good things like planting trees along streams’, but the protests were more muted and less emphatic that in the past. And from being an obscure, ‘greenie issue’ less than a year ago, the concern about the proliferation of plastic waste (particularly its effect on our oceans) is teetering on the edge of becoming a ‘mainstream’ public concern.

To make inroads into our most pressing environmental challenges, the current government not only needs to capitalize on newly emerging public concerns, but also to take up the mantle of leadership and not be afraid to lead public opinion through awareness-raising initiatives to encourage New Zealanders to take more responsibility for the environmental impacts of their everyday behavior and decisions.

My hope is that a future historian will be able to reflect back on this period, and identify it as a watershed era in terms of environmental awareness and action – a ‘tipping point’ in environmental history, much like the Save Manapouri Campaign was half a century ago.