Andrew Meyer is a professor of history at Brooklyn College. He blogs at Madman of Chu, where this piece first appeared. 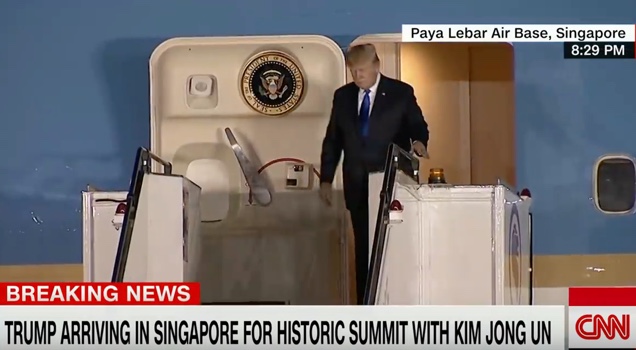 As Donald Trump lands in Singapore for his historic summit with North Korean dictator Kim Jong-un, there is reason for concerned citizens around the world to be pleased. What a few months ago looked like imminent war has (for the moment) been averted, and the Trump administration deserves credit for charting a new, bold course in US-North Korea relations. Though there are obvious risks in the kind of unprecedented high-level direct diplomacy that Trump has undertaken (quite precipitously and with little preparation), those risks arguably pale by comparison to the disappointments and injuries of the last seven decades of bi-national deep freeze.

All that being said, little real progress can be expected to come from the current summit. This is foreordained by the terms in which Trump has cast his understanding of North Korea and the kinds of joint policy that might potentially be pursued with Pyongyang. Trump views this relationship in the same kinds of transactional terms in which his life as a rentier has taught him to assess all associations. He thus is confident that he travels to Singapore with a very strong hand to play. He has repeatedly declared the ease with which a "deal" can be arrived at with Kim Jong-un, because in return for whatever concessions Kim is asked to make, Trump can guarantee that "his country would be very rich."

Trump's confidence is easy to understand when one looks at raw economic numbers. The GDP of North Korea (according to the CIA World Factbook) is $28 billion US (at the official exchange rate). The US could thus double the size of the North Korean economy for about half of what it expects to spend on the war in Afghanistan during 2018 alone. If the North Korean leadership are one-tenth as motivated to bring economic prosperity to their country as Donald Trump thinks they are, coming to a mutually advantageous deal should be a piece of cake.

The problem, of course, is that Donald Trump is absolutely wrong. North Korea did not become one of the poorest countries on earth accidentally. It became so through the establishment of a complex of repressive institutions that, though economically crippling, serve to keep a narrow and ideologically malignant oligarchy in power. The best literary analogue for the North Korean regime is a story by Stanislaw Lem, the "Eleventh Voyage" of the Star Diaries. In that tale Lem's intergalactic Sinbad, Ijon Tichy, is sent undercover to a planet of sadistic robots, in which it is the custom to constantly torment small animals and subsist on a diet of hot motor oil, ruled over by a tyrannical government that keeps its citizens constantly vigilant for infiltration by soft-hearted "mucilids" (human beings). Tichy endures this life for a while before finally discovering that all of the other inhabitants of the planet are likewise human beings costumed as robots, who have become outwardly avid animal-torturers and oil-drinkers through social pressure.

The Pyongyang regime is a similarly draconian house of cards, made more volatile by the near proximity of South Korea. Trump constantly compares the two regions of the Korean Peninsula, offering the prosperity of the South as a tantalizing incentive to the North. But this overlooks a key weakness of the Pyongyang regime. Trump (like many Americans) assumes that the political division of the Peninsula is an indissoluble fact, but both North and South agree that Korea should not naturally be two countries, but one. Much of the ideologically perverse nature of the Pyongyang system thus flows from the proximity of one Korea to the other. On the one hand, the Northern regime must keep itself systemically distinct from that of Seoul in order to justify its own existence: why would the Peninsula need two governments unless one of them was fundamentally wrong? On the other hand, the North must keep a total lockdown regarding information about the outside world, otherwise word of the great success of the South would lead to political instability in the regions controlled by Pyongyang.

The proof that this dynamic is at work may be found just over the Yalu river, in China. In 1980, under the leadership of Deng Xiaoping, the Chinese Communist Party began a series of free-market reforms that have famously engendered a virtuous cycle of explosive economic growth. In 1980, the per capita GDP of China was a staggeringly low $195 US. By contrast, the per capita GDP of North Korea was $639 US. After almost four decades of reform, the per capita GDP of China is now $6152 US, while that of North Korea is lower than it was in 1980, at $583 US. Some of that degradation is the result of politically imposed sanctions, but nothing changes the fact that the current economic situation of North Korea embodies a deliberate choice: at any time in the last 38 years Pyongyang could have climbed aboard the reform train set rolling by Deng Xiaoping in 1980. North Korea's patrons in Beijing would have been happy to welcome Pyongyang into its circle of reform and shared prosperity. Vietnam has followed the Chinese model and has seen substantial economic gains.

Why did Pyonyang avoid the course charted by China and Vietnam? The answer lies in the example of East Germany. Participation in the Soviet-led programs of perestroika and glasnost steadily eroded the foundations of the repressive East German regime (the nearest analogue to that of North Korea to be found, historically, geographically, or structurally), until it finally collapsed and the East was absorbed into the West.  Kim Jong-un and his fellow oligarchs fear that economic liberalization will induce the same process on the Korean Peninsula as occurred in Germany, and that if and when such an outcome arrives the leaders of the North will be held to account for their crimes against humanity.

This is the inherent situation as Trump arrives in Singapore. He comes to this summit with much less to offer than he imagines. Pyongyang itself has put out messages to encourage Trump's misconceptions, most famously a video of Kim Jong-un ostensibly weeping over the poverty of his people. Some of these sentiments may be sincere. Pyongyang would no doubt like access to more resources, and might even like to ease some of the direst economic distress of its people. Malnourished men and women make poor soldiers and workers. But no one should be under any illusions about the temptations of economic prosperity to North Korea's elite. Kim Jong-un and his ilk will live like kings no matter how bitterly his people suffer. Meanwhile, they understand that any scenario that begins with KFC's opening up on every street corner in Pyongyang will end with Kim and his cohort suffering the same fate as Muammar Gaddafi or Nicolae Ceaușescu.

The North Koreans have given Trump many reasons to feel that he is playing a very strong hand. This is always a good negotiating tactic- making one's counterparts overconfident is a means to ensure that they will be disoriented and pliable once they are forced to adjust their expectations. If Donald Trump wants to pry significant concessions from the North he had better bring more "art of the deal" than he has heretofore displayed as POTUS, because he has very little to offer that Pyongyang will find tempting. By opening up a new diplomatic channel Trump has, barring some major mistake or misfortune, contributed to progress in the politics of the Korean Peninsula. But he is not likely to achieve more than that basic foundation, given his misunderstanding of the dynamics at play.