Suzy Evans, a lawyer and literary agent, received her Ph.D. in history from UC Berkeley. Her books include Machiavelli for Moms: Maxims on the Effective Governance of Children (Simon & Schuster). 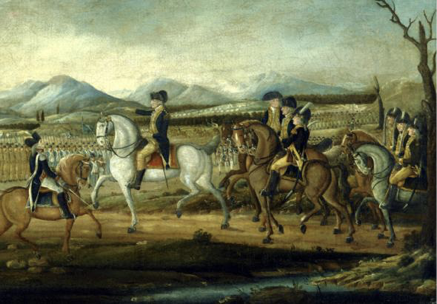 Not long after George Washington took office, one of the most serious threats to the authority of the federal government and stability of the new nation arose in the form of a tax resistance movement known as the Whiskey Rebellion. In 1791, Congress passed a measure that placed a small excise tax on whiskey and other distilled liquors, earmarked to offset part of the federal government’s recent assumption of state debts.

Protests against the tax were swift and severe, but no one resisted it more vigorously than poor farmers in western Pennsylvania. Why? Because whiskey, which is distilled from corn, rye and other grains, was used on the frontier as a form of cash to barter with in exchange for other goods. To poor, uneducated farmers, whiskey was as valuable as gold, and the tax interfered with their ability to buy and sell it.

Cash was also scarce on the frontier, but the tax had to be paid in cash, and anyone who didn’t pay it had to travel hundreds of miles over dangerous mountain terrain to appear in federal court, and they had to pay to travel there and back. Whiskey was also used for many purposes on the frontier. It was used for cooking and as a medicine. It was the drink of choice at home, at work, and at social gatherings. But the tax made whiskey more expensive, and most poor farmers on the frontier couldn’t afford to pay it.

Exacerbating matters was the fact that the Spanish, who possessed the Louisiana Territory, were blocking cargoes of agricultural goods being shipped down the Mississippi River. But the federal government wasn’t doing much to build western roads or negotiate access to the port of New Orleans. So the farmers expressed their anger at the federal government by refusing to pay the tax.

Then things got nasty fast. In Pittsburgh, a group of farmers kidnapped a federal tax collector from his bed and marched him in the darkness to a blacksmith shop, where they stripped him naked to his waist and burned him with fire pokers. For three years, tax collectors were beaten, terrorized, intimidated, threatened, shot at, humiliated and harassed. One poor agent was even “tarred and feathered” and then driven out of town on a rail.

Similar acts of violent resistance erupted in other towns along the frontier. Then, in July, 1794, four hundred whiskey rebels torched the home of the chief tax collector near Pittsburgh and burned it to the ground.

Back in Philadelphia, President Washington warned locals "not to abet, aid, or comfort the Insurgents” or do so “at their peril.” But, his warning was ignored, and a band of well-armed, well-organized militant rebels threatened to secede from the United States and form a separate nation.

In response, Washington dispatched some 13,000 federal troops and personally led the U.S. Army on its march toward Pennsylvania to crush the rebellion. Within a month, most of the rebels had disbanded or fled the state. But more than 150 were convicted of criminal activity and two were convicted of treason and sentenced to death.

In the end, Washington pardoned them. Still, the Whiskey Rebellion was significant as the fledgling new nation had survived its first serious test of federal authority. It also revealed a growing division that pitted pro-business and urban interests (led by John Adams and Alexander Hamilton), against rural and agricultural interests (led by Thomas Jefferson and James Madison), and contributed to the rise of the nation’s divisive two-party political system that has defined American politics ever since.