What African Americans Who Knew Lincoln Thought of Him

Kate Masur teaches in the Department of History at Northwestern University. She is the author of An Example for All the Land: Emancipation and the Struggle over Equality in Washington, D.C. and the co-editor of The World the Civil War Made. She is the editor of the just-published, They Knew Lincoln. 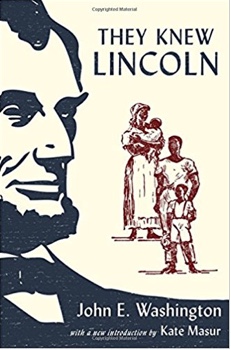 As Lincoln’s birthday approached in 1942, the New York publisher E. P. Dutton released with great fanfare a new book titled They Knew Lincoln. Introduced with a preface by beloved Lincoln biographer Carl Sandburg, the book tapped into the widespread interest in Lincoln that characterized the New Deal era. Yet this was an unusual title in the Lincoln oeuvre because its primary focus was Lincoln’s relationship with African Americans. It offered detailed accounts of men and women who had encountered Abraham and Mary Lincoln in Springfield and Washington, D.C., among them a skilled dressmaker, a Haitian-born barber, and a woman who owned land on which a Civil War battle was fought. In telling their stories, the book documented and honored the generation of African Americans who had lived through the Civil War and experienced the abolition of slavery.

They Knew Lincoln, written by an African American high school teacher and collector of Lincolniana named John E. Washington,earned critical acclaim and sold out quickly – but was never reprinted. Reviewers appreciated that Washington had accomplished something novel. The book was an “interesting collection of history, biography, and reminiscences and folk lore,” wrote the NAACP’s Crisis magazine, praising it for presenting “in a fascinating manner a human picture of the Negroes who were in intimate contact with Abraham Lincoln.”

When They Knew Lincoln was released, almost nothing was publicly known about the Lincolns’ African American associates and employees. Shortly after the assassination, Lincoln’s law partner, William Herndon, gathered stories from everyday people who had known Lincoln, but Herndon was evidently not interested in perspectives from African Americans. He had not, for example, interviewed Elizabeth Keckley, the dressmaker and confidant of Mary Todd Lincoln who in 1868 published a memoir, Behind the Scenes. Nor had he talked with William de Fleurville, Lincoln’s barber and legal client in Springfield, or with Elizabeth Thomas, the Washington resident whose land had become the site of Fort Stevens and who met Lincoln when he visited in 1864, during Confederate General Jubal Early’s attack on the nation’s capital.

Seventy years after Lincoln’s death, in fall 1935, the Associated Press ran a story asserting that Keckley had not written Behind the Scenes and in fact had never existed. Such claims were preposterous to the many black residents of the capital who had known Keckley personally. Intending to set the record straight, John E. Washington wrote a letter to the editor of the Washington Star. The controversy over Keckley’s identity inspired Washington to further illuminate the lives of African Americans who had encountered and influenced the Lincolns. He started researching who might have helped Keckly get her memoir into print, and that effort snowballed into a larger project on what he called “the colored side of Lincolniana.”

Working many decades after Herndon, Washington had a harder time obtaining first person interviews. He exploited archival sources whenever possible. He also turned to his own recollections of stories told by his grandmothers’ friends, whom he had known as a child growing up near Ford’s Theatre. He interviewed very elderly people who recalled the Civil War era, and he spoke to descendants of that generation, soliciting their memories of relatives and friends.

Washington figured such interviews had value despite how much time had passed, and historians have largely agreed. Many of the vignettes he recorded must be used with caution because they are the products of people’s memories, stories told many years after the events themselves. Yet Washington’s accounts of African American employees in Lincoln’s White House, in particular, have become indispensable to historians because there is virtually no other documentation of those employees’ lives.

They Knew Lincoln was innovative in its own time and has just been reprinted for the first time. Its republication comes amid continuing tensions in how Americans understand Lincoln, slavery, and the Civil War. When John Kelly, the White House chief of staff, said the Civil War was about states’ rights and a tragic failure to compromise, he reminded us of the long shadow cast by mid-twentieth-century academic historians whose scholarship minimized the significance of slavery and race in the conflict. A few years back, Steven Spielberg’s film, Lincoln, demonstrated that even a narrative focused on the abolition of slavery could gloss over the role of African Americans in their own liberation.

These are markers of a larger tendency to segregate our histories – to separate “great men” from the rest, black from white, and race from nation. John E. Washington rejected that kind of sorting, opting instead for a more encompassing approach. He tried to show where Lincoln’s history and African Americans’ histories converged, and he emphasized the dignity and significance of the African American workers whose lives overlapped with the Lincolns’.

Washington thought black readers and white readers alike would appreciate his efforts, and he was right. They Knew Lincoln made a critical contribution to Lincolniana by demonstrating that the African Americans whom Lincoln encountered were real people with names and histories of their own. We continue the struggle to imagine an American history – and an American present – in which the lives of all people, not just those recognized as Great Men, are accorded the respect and significance they deserve.