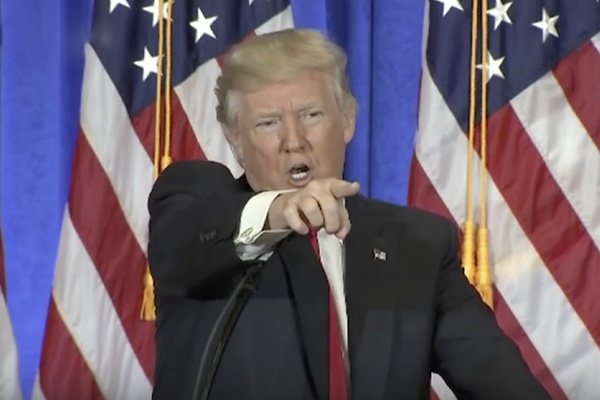 He is crude, nasty, insulting, fights dirty, and behaves in a manner so unbalanced that psychiatrists have been sounding the alarm for at least two years about his mental condition.  Yet the current White House physician — one Ronny Jackson — claims that the results of a “cognitive exam” show that Donald Trump is just fine.

The question is of vital importance to America and to the world.  It is also important to historians, because it leads to another question:   has the Electoral College at last put a madman in power?

“Madness” is a concept like “indecency” that can be shrugged away as imprecise or beyond definition.  But the issue of indecency is precisely the issue that defines the insanity of Trump.  He is driven to make things as pointlessly disgusting and as needlessly horrible as possible — disgusting to the point where most normal people feel sick to their stomachs — and to do it for ever-higher stakes.

He makes fun of the handicapped, demeans military heroes without ever having served in uniform, heaps scorn upon the victims of natural disasters, pursues policies that degrade the whole planet, adds misery to the lives of the helpless, and makes suckers of the voters who supported him by making the rich even richer while telling the members of his “base” that this somehow helps them get ahead — the list could go on, for there can be no limit to the satisfaction he derives from debasing everything he touches.

This is more than the behavior of a stupid and tasteless vulgarian.  At the heart of it all is a compulsion.

The current form of the compulsion is to rob the presidential office of its power to inspire.  There was a point to it all last year when the President of the United States addressed a convention of Boy Scouts and proceeded to violate the heart of their character-building creed by bragging — bragging about the way he had beaten his opponent.  This loweredthe stature of his office and it made a great many of the participants wish to be elsewhere.  It ruined the occasion.  The president was teaching the Boy Scouts to be nasty.

That was the systematic purpose of Trump’s behavior that day and it was part of a much larger pattern.

For Donald Trump is a compulsive defiler.  He enjoys it.  It makes him happy.

He seems driven to prove to himself and to everybody else that his power extends beyond the ability to “get away with anything.”  His power is greater than that:   he can get away with disgusting behavior that no one else would have the gall to think of.

Hence his otherwise pointless attempt to deny the heroism of his own party’s nominee for the presidency in 2008, a man who had stood up to torture as a prisoner of war while Trump avoided military service.  How otherwise can one explain such behavior, behavior of the sort that would in normal times ruin the reputation of any politician who dared to indulge in it, except as a gesture to prove that he — and he alone — can mock certain near-universal standards of decency and get away with it?

This was more than an attempt to degrade.  It was a demonstration of the absolute power to defile.

And he enjoyed it.

He found it fun.

He makes fun of the appearance of women, brags about groping them, and brags about evading taxes.  He makes up nicknames for those who disagree with him and revels in humiliating people.  He comes off like an all-purpose villain in an old-time Hollywood film, the guy who fights dirty — for the fun of it — who smirks and who brags and who only cares about ruining things.  What he represents is the knee to the groin, the swift kick below the belt, the loud belch on the solemn occasion.  There used to be a short and pithy term for the likes of Donald Trump in America.

He is the gross-out artist of the frat house.

He is such a compulsive louse that one suspects there must be something deeply . . . “wrong with him.”

And the fact that he occupies the office that was first held by George Washington adds to his glee.

One of the common complaints among Trump’s critics is the fact that his behavior is un-presidential.   People simply cannot get used to the fact that the President of the United States acts like a guttersnipe.  No one has seen such a thing in our times and it’s impossible to regard it as anything less than weird.

And that appears to be precisely what Donald Trump finds so enjoyable.  He loves it.

White House physicians in the past have covered up a great many things about the medical conditions of presidents.  Dr. Cary Grayson, Woodrow Wilson’s physician, hid the facts about the president’s stroke.  The physicians treating Franklin D. Roosevelt said nothing during the 1944 election to reveal that FDR was dying.  And the physicians treating John F. Kennedy, some of whom were arguably quacks, hid the facts about his serious back and intestinal conditions.

Granted, the concepts of “madness” and “insanity” are arguable.  In the 1960s a renegade psychiatrist named Thomas Szaz denied that there is any such thing as insanity.  All that we can say, he asserted, is that certain people behave in unusual ways that other people find strange.  A famous psychiatrist, Erich Fromm, refused on principle to use the word “insane” about Adolf Hitler, whom he did acknowledge was “sick.”  Fromm categorized Hitler’s “sickness” as “malignant necrophilia.”

And then there are the sadists, the masochists, the devotees of whips and bondage — the perverts.

Psychiatrists have called Donald Trump the victim of “narcissistic personality disorder.”  But there is reason to believe that his madness goes deeper than that.  Perhaps these mental-health practitioners should look at the literature in their field about the sorts of people with a mania for . . . desecrating things.  The fact that Donald Trump is so obsessed about physical luxury, physical grandeur, slacks that are steam-pressed every single day, is perhaps a compensation for the drives that are pulling him constantly, relentlessly, toward behavior that goes beyond “trashy.”

There are clinical terms for the sorts of people who suffer from a morbid attraction to filth.

People who find themselves aroused by the chance to make the lives of others raunchy and putrid.

Trump is a very sick man, and his pathology is to make us all as sick as he possibly can — sick to our stomachs, sick at the sight of him snorting and cavorting in his sty.  He is having the time of his life making everything around him “go bad.”

It is time for a cure.