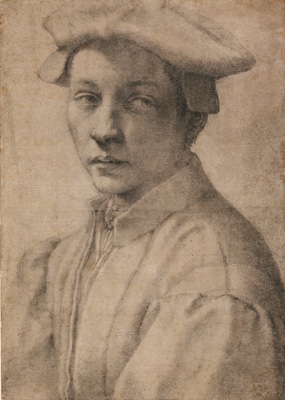 About 15 years ago, my wife and I were visiting Florence, Italy, and ran to the Galleria dell 'Accademia' there to look at the famous ‘David’ statue by Michelangelo. It was an overcast summer morning and there was a long line at the ticket window. We bought our tickets and got on line, hoping to see ‘David’ before we had to sprint off to catch a tour bus to another city. I gave the teen ticket collector my stubs and asked how to find ‘David.’

“You go down that hallway and take the first right turn. It’s there,” he said.

“How will I know where to find it when I turn?” I asked, assuming that it was one of a long parade of statues.

We walked down the hall and made the first right turn. There it was, in all of its majesty, standing there like it was the center of the universe.

Last week, after a snowstorm had blanked New York City in white, I trudged across a snowy and icy Fifth Avenue at 82d Street to the Metropolitan Museum of Art to see their dazzling new collection of Michelangelo sketches, Michelangelo: Divine Draftsman & Designer.

Describe it in one word? Genius.

Americans who see the usual works of Michelangelo (Buonarroti) in Italy, whether at St. Peter’s, in Rome, or in Florence, see big pieces. ‘David’ is seventeen feet tall. His most famous paintings are larger. The ceiling of the Sistine Chapel, his most famous work, is 133’ by 46’. Here, at the Divine Draftsman & Designer exhibit at the Met, most of the piece are small. They are first or second sketches of parts of large paintings, all pieces of genius that people ordinarily do not get to see. That is the charm of this impressive and beautifully presented show of the master’s work- behind the scenes with Michelangelo.

The exhibit has pieces (some are by artists other than Michelangelo) from 50 museums in the U.S. and Europe. No single collection of the artist’s work from all of these places has ever been on public display before. The exhibit is spread through several large galleries at the Met and when you finished it (give it two hours, at least), you will have learned a tremendous amount about the painter and his historic times.

Michelangelo was born on March 6, 1475 in the village of Caprese, outside of Florence and died a wealthy and distinguished artist at the age of 89 in 1564. Even though he spent his last 30 years in Rome, he considered Florence his home. It was there, he said, that “I received the knack of handling chisel and hammer, with which I make my figures.”

The painter was a boy genius and his sketches soon caught the eye of Domenico Ghirlandaio, who ran a large artist’s studio where young painters and sculptors learned the trade. The boy from Caprese learned the trade fast. He drew the colorful and intriguing The Torment of St. Anthony at the age of 12 and then, as his teenaged years flashed by, his fame grew and spread throughout the world.

Michelangelo was not only a fast learner, but a man who studied the work of other artists to improve his own. In the Ghirlandaio Studio he did that for years, watching how others tackled assignments and then improving on their work. There are sketches by him based on the work of others in the exhibit. He also made sketches of Roman and Greek statues and used them to create his own, similar, works in marble, such as The Young Archer, a statue in the exhibit.

He loved carving in marble and had visions of how his work in it would turn out. “I saw the angel in the marble and carved until I set him free,” he once said.

You learn a great deal about how Michelangelo worked and the history of artists in the 1500s through the sketches in the exhibit.

First, he drew small sketches of people, or places, in what would be a larger, overall, sketch, then turned that into a painting or work of marble. He sometimes glued several pieces of paper together and then drew the sketch on them all. His work was painstaking in detail.

Second, he drew a sketch, usually in red chalk, and then, around the main subject, he drew several small sketches of other parts of that larger painting or people from other paintings he had in mind. He was always working on something.

Third, he loved people, all kinds of people, and specialized in drawing them as they looked to him as old or young, rich or poor, thin or heavy. There are the faces of old, weary women and young, beautiful ones. There are strong, battle ready Roman soldiers and, a few feet away, a portrait of a thin, worn down man rubbing his face, staring down at his feet with old droopy eyes. He drew many nudes, but also produced gorgeous sketches of fully clothed people, often from behind, and the detail in their clothes was mind-boggling, down to the numerous gentle folds in their robes.

His fame spread quickly. When he was 31, a government official in Florence described Michelangelo in a letter to the Pope as “an excellent young man and in his profession unequalled in Italy, perhaps in the whole world.”

All of his sketches were full of extravagant detail. You can stare closely at the people and honestly believe that they have come to life for you. His mastery of the human body is legendary and in the exhibit’s sketches you can see why. There are muscular young men and weary old women. His sketches of Jesus in his resurrection and crucifixion collection are gorgeous. There are several of Jesus’ body lying down, full of a 33-year-old man’s muscles and a flat abdomen. His nude figures are sensational, the bodies stretching this way and that, muscles extended and fingers well defined.

The Met did a fine job in picking its sketches and complemented them with paintings done of them by others. As an example, there is his huge sketch of Venus and cupid. Right next to it is a full color painting of the same sketch by Michele Tosini. Both are impressive. There are also a dozen or so architectural designs based on his own blueprints for various churches, buildings, doorways, windows and a piazza.

One thing I liked about the exhibit is how the Met curators showed you the sketch and then, next to it, a photo of the total painting with the sketch in it outlined.

Michelangelo’s work is infused with a lot of Italian and Florence history, noted in the exhibit. After his internship with Ghirlandaio, he was taken under the wing of the wealthy and powerful Lorenzo de Medici, the Magnificent. The de Medici’s, bankers, had been the behind the scenes rulers of Florence for years. De Medici brought in numerous artists as his protegees and Michelangelo was one. He lived at his court for several years, until De Medici’s death in 1492, and then moved back with his family. He was caught up in politics, though, was forced to leave Florence, fleeing to first Venice and then Bologna. In 1494 King Charles VIII of France invaded Italy and seized Florence. The next de Medici in line, Piero, made a treaty with him that the townspeople disliked. They forced Piero into exile and for several years the city was run as a Republic. A religious leader, Savonarola, took over but he was unpopular and executed. After his death, Michelangelo returned to the city. The de Medicis bounced back into power but lost it in 1527. Two years after that, the Spanish invaded the city and the de Medici’s grabbed power again and held it for two hundred years.

Michelangelo was drawn into that war with Spain. He was asked to re-design the walls of the city in order to keep the Spanish army out of it. He did so, successfully, and the sketches of his new defensive walls are in the exhibit and give a nice touch of Michelangelo and history.

In the early 1500s, there was renewed interest in Italy about the murder of Julius Caesar and Michelangelo used that to create his marble bust of Brutus. He drew scenes of the battle of Cascina, in which Florence defeated Pisa in 1364.

He drew sketches of slaves in Florence, shedding light on their number in the city at that time. He worked for eight Popes in his life and the exhibit gives a bit of history on their elections and rule.

There are two sketches of Cleopatra, the Queen of Egypt. One is half finished and the other is complete, a perfect portrait of her with sad, longing eyes, perhaps for a life that might have turned out differently.

He spent some time in Rome where, at the age of 24, he carved the Pieta, the fabled statue of Jesus cradled in his mother’s arms that has traveled throughout the world (I saw it at the 1964 World’s Fair in New York, where the crowds around it dwarfed those around Da Vinci’s Mona Lisa).

During most of his life, Michelangelo sported a beard. His attractive face was punctuated by a deformed nose. It was broken in a fight with a man when he was 17. He was often temperamental. A Pope once asked him to mend a painting. “Tell his supreme Holiness that this is a mere trifle and can easily be done: let him mend the world.”

Those who knew him said he suffered from bouts of depression. He voided the social life of Florence. “It is well with me only when I have a chisel in my hand,” he said.

The last exhibit hall is, naturally, St. Peter’s Basilica in Rome and the fabled Sistine Chapel. The Met curators have smartly installed a huge photo of the chapel ceiling on the ceiling of that room that you cannot miss as you walk into it. The room includes an early Michelangelo sketch of the dome. He served as the chief architect of St. Peter’s for seventeen years. The artist also designed numerous other buildings in Rome and re-deigned Capotoline Hill.

Michelangelo never married. He earned a significant amount of money in his lifetime, yet led a spartan existence. He worked all day and often slept in his clothes. He lived in a large home, but it was sparsely furnished. He had no real interest in food and rarely drank. A biographer, Paolo Giovio, wrote that “his nature was so rough and uncouth that his domestic habits were incredibly squalid.” He had numerous acquaintances, but few close friends.

When he traveled, or stayed in Rome, he communicated often to his house servant, Pietro Urbano, giving him instructions on both his home and paintings and sketches (the exhibit has one of those letters on display).

The 200 and some sketches are just part of the number of sketches the artist left and a small part of the total he made. Towards the end of his life he burned hundreds of them.

The Met Michelangelo exhibit is a delight and you learn a great deal about Italian history.

The exhibit runs through February 12.