The Boston Molasses Disaster: One of the Strangest Disasters in American History

Suzy Evans is a literary agent, attorney, author who holds a Ph.D. in history from UC Berkeley. Her books include Machiavelli for Moms (Simon & Schuster) and Forgotten Crimes: the Holocaust and People with Disabilities. Find Suzy on Twitter @thehistorychef and at suzy@dijsktraagency.com. 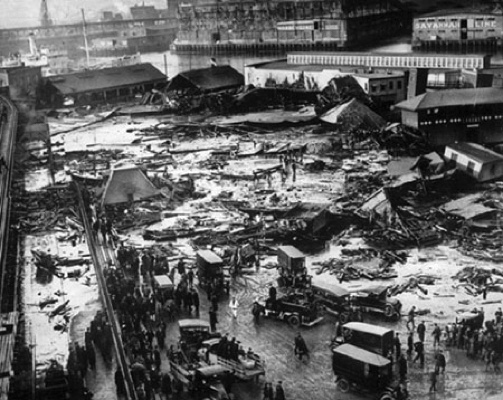 At 12:40 p.m. on January 15, 1919, in Boston’s industrial North End, a 50-foot-high steel storage tank containing more than two million gallons of molasses collapsed, sending an immense wave of thick, viscous goo sweeping through the city streets as fast as 35 miles per hour.

The wave – initially fifty feet high and 160 feet wide, according to some witnesses – exerted enough force to snap the steel girders of an elevated railway structure and temporarily lift a train off its tracks. Within seconds, the force of the blast and ensuing tsunami crushed cars, trucks, horses, dogs, and steel trolleys in its path, demolished several buildings, including a fire station that was flattened by a massive chunk of the tank, and decimated two full city blocks.

Witnesses later stated that as the tank collapsed there was “a dull, rumbling sound, like machine gun fire,” and that “the ground shook as if a train were passing by.” In all, the disaster left 150 injured, and 21 dead, mostly by crushing or asphyxiation.

“HUGE MOLASSES TANK EXPLODES IN NORTH END” read the Boston Post’s front-page headline the next day. The accompanying article described the disaster this way: “a 50-foot wave of molasses—2,300,000 gallons of it—released in some manner yet unexplained, from a giant tank, swept over Commercial street and its waterfront from Charter street to the southerly end of North End park yesterday afternoon. Ensnaring in its sticky flood more than 100 men, women, and children; crushing buildings, teams, automobiles, and street cars—everything in its path—the black, reeking mass slapped against the side of the buildings footing Copp’s Hill and then swished back toward the harbor.”

More horrible details followed: Molasses, waist deep, covered the street and swirled and bubbled about the wreckage. Here and there struggled a form — whether it was animal or human being was impossible to tell. Only an upheaval, a thrashing about in the sticky mass, showed where any life was. Horses died like so many flies on sticky fly paper. The more they struggled, the deeper in the mess they were ensnared. Human beings — men and women — suffered likewise.

The Boston Evening Globe ran an equally graphic description based on eyewitness accounts: Fragments of the great tank were thrown into the air, buildings in the neighborhood began to crumple up as though the underpinnings had been pulled away from under them, and scores of people in the various buildings were buried in the ruins, some dead and others badly injured.

"The greatest loss of life," according to the New York Times, "occurred in a building where a number of city employees were eating lunch. The building was demolished and the wreckage was hurled fifty yards. Another city building was torn from its foundations and the nearby firehouse was crushed, leaving three firemen buried in the ruins."

Meanwhile, as frantic rescue efforts were underway, city officials demanded to know why the tank collapsed. “Standing shin-deep in molasses,” Boston mayor Andrew Peters told reporters that an “occurrence of this kind must not and cannot pass without a rigid investigation to determine the cause of the explosion—not only to prevent a recurrence of such a frightful accident—but also to place the responsibility where it belongs.”

Fueled by the intense anti-immigrant sentiments of the post-war Red Scare, the distillery’s owner, U.S. Industrial Alcohol, claimed that the disaster was an act of sabotage, most likely by radical Italian anarchists who dynamited the tank because the molasses was to be used to produce ethyl alcohol, a key component in the manufacturing of wartime munitions.

“We know beyond question that the tank was not weak,” USIA attorney Henry Dolan told reporters. “We know that an examination was made of the outside of the base of the structure a few minutes before its collapse. We know, and our experts feel satisfied, that there was no fermentation because the molasses was not of sufficient temperature to ferment.” Dolan concluded “that there was no structural weakness” and that “something from the outside opened up the tank.”

Lending weight to USIA’s claim was the fact that anarchists had bombed a number of the company's facilities in New York several years earlier and dozens of explosions had occurred in Boston and nearby cities in the past year alone. It was also known that Boston was home to some of the most radical anarchists in the country.

By coincidence, the day after the tank collapsed, Congress ratified the 18th amendment to the Constitution, which prohibited the manufacture, sale, and distribution of intoxicating liquors. With Prohibition looming on the horizon, rumors began circulating that the tank had been overfilled so that USIA could produce as much rum as quickly as possible before the law took effect the following year.

This claim was later proven untrue due to the fact that USIA didn't make rum and specialized instead in the production of industrial alcohol, which was legal under the state prohibition laws in effect at the time.

Nevertheless, a massive class-action lawsuit was taking shape, as more than a hundred claims were filed against USIA by the survivors and families of those killed — mostly poor Irish and Italian laborers — who claimed that the company was responsible and should compensate them for their suffering and loss.

To support the charges, lawyers argued that the tank had leaked since its construction and was making “strange hissing sounds and vibrations” under the immense pressure of the molasses, which, on the day of the disaster, weighed roughly 13,000 tons.Not only did USIA ignore these warning signs, it was argued, it had sealed the leaks and painted the tank brown in an attempt to conceal them.

The lawsuit dragged on for six years and included the testimony of more than 3,000 witnesses. In the end, the court ruled that the destruction of the tank was not an act of sabotage but the result of structural failure and unsafe business practices on the part of USIA. The court also ordered the company to pay $1,000,000 in damages — a “bittersweet victory” for survivors of one of the strangest disasters in American history.

After the verdict, Massachusetts and other states passed laws regulating construction, thus signaling the end of an era when big business faced little restrictions on its activities and little-to-no consequences for its actions.