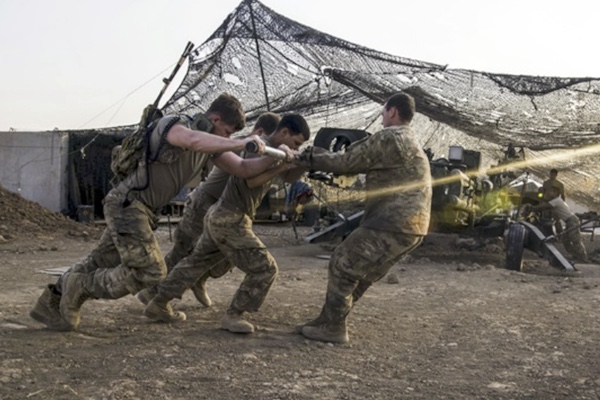 In the aftermath of World War II, the U.S. occupation authorities in Germany, checking on the effectiveness of their “denazification” program, polled Germans on whether they believed a civilian was “less worthy than a soldier.” One wonders what they would think of the exalted status that many Americans currently accord to anyone serving in the U.S. armed forces, as announcements ring out―from airline flights to sporting events―with calls to applaud “Our Heroes.”

This adulation of everyone wearing a U.S. military uniform is a fairly recent phenomenon. Although the popularity of triumphant military commanders like George Washington, Andrew Jackson, Ulysses Grant, and Dwight Eisenhower helped pave their way to the White House, the status of “hero” was not necessarily accorded to them or to the millions of other people who served in the U.S. military. As the journalist Stephen Kinzer has noted: “Past generations of Americans saw soldiers as ordinary human beings. They were like the rest of us: big and small, smart and dumb, capable of good and bad choices.” Today, he added, “we pretend they are demi-gods.”

A hero, according to the standard definition, is a person noted for courageous acts or nobility of character. How well do soldiers measure up to this standard?

Some measure up rather well, especially when they do things like persevere against overwhelming odds, rescue fallen comrades under withering fire, and defend civilians against enemy attack. Although the wisdom and justice of wars in which soldiers fight can certainly be questioned, soldiers do behave heroically in many instances.

Other soldiers measure up badly, especially when they engage in massacring civilians, torturing or shooting prisoners, raping women, and other war crimes―things that have characterized the behavior of some U.S. troops from the nation’s early wars to more recent times.

Most American soldiers, though, have been neither heroes nor villains but, rather, dutiful, if sometimes reluctant, participants in the armed forces. As one former U.S. soldier told me, upon his return from the Vietnam War: “I just kept my head down and tried to survive.” In recent years, in the context of an all-volunteer army, most young people have enlisted because they have little economic opportunity in civilian life, are continuing a family’s military tradition, or have a youthful taste for adventure. Although some might end up displaying extraordinary valor or nobility of character, most are not trying to act like heroes but, simply, to do their jobs.

Defenders of their heroism argue that, by joining the armed forces, U.S. soldiers are courageously risking their lives and limbs. And it’s certainly true that some pay a terrible price for their military service. But, in fact, most modern U.S. soldiers never or rarely see combat. In 2017, only about a third of active duty U.S. military personnel were located outside the United States, and the vast majority of these were not deployed in combat zones.

Civilian employment also has serious, though rarely mentioned, hazards. During 2016, there were 5,190 fatal work injuries in the United States, with the highest fatality rates among loggers, fishermen, and aircraft pilots and flight engineers. Firefighters, police, and farm workers also hold exceptionally dangerous jobs. According to the AFL-CIO, 50,000 to 60,000 Americans died of occupation-related diseases in 2015, while work-related injuries and illnesses have numbered between 7.4 million and 11.1 million per year.

But is there anything harmful about the blanket lauding of soldiers as heroes?

Well, yes. It inculcates the dangerous myth that soldiers can do no wrong. As Lieutenant Colonel William Astore has pointed out: “When we create a legion of heroes in our minds, we blind ourselves to evidence of destructive, sometimes atrocious, behavior. Heroes, after all, don’t commit atrocities.” These atrocities, “so common to war’s brutal chaos, produce cognitive dissonance in the minds of many Americans, who simply can’t imagine their ‘heroes’ killing innocents and then covering up the evidence. How much easier it is to see the acts of violence of our troops as necessary, admirable, even noble.”

Also, when American soldiers are idolized, respect for militarism and war grow accordingly. Military training, military expenditures, military intervention, and military escalation become ways to “support the troops” or, at the least, take on a friendlier glow.

In addition, as soldiers, fervently applauded by the public, adopt the popular notion that they are the saviors of the nation, they have a tendency to stage armed takeovers of democratically-elected governments. After World War I, Mussolini and Hitler began their own assault on democracy by mobilizing fellow veterans of that conflict to seize power.

Fortunately, the founders of the United States, fearful of “Caesarism,” placed control of the military in the hands of the elected civilian authorities. But glorification of the armed forces could alter this arrangement.

Being uniformly lauded as “heroes” is also harmful to many soldiers, for it sweeps much of their actual experience under the rug. Large numbers of American troops come home from combat suffering from PTSD, alcoholism, and drug dependency. Indeed, an estimated 22 U.S. veterans a day commit suicide. In these circumstances, they need understanding and help rather than fawning adoration.

For these reasons, among others, even soldiers themselves have objected to being labeled “heroes.”

Shouldn’t we stop singling out “the troops” for adulation and applaud heroism wherever it occurs?