Aaron Leonard is author of Heavy Radicals: The FBI’s Secret War on America’s Maoists (Zero Books, 2015), and A Threat of the First Magnitude—FBI Counterintelligence & Infiltration: From the Communist Party to the Revolutionary Union—1962-1974 (Repeater Books, UK, January 2018). He lives in Southern California. 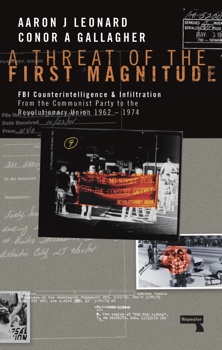 The following is based on research by Aaron J. Leonard and Conor A. Gallagher for their book, A Threat of the First Magnitude: FBI Counterintelligence & Infiltration from the Communist Party to the Revolutionary Union - 1962-1974, (London: Repeater Books, 2018).

“Comrades: The time has come to throw off the shackles of revisionism and return to the Revolutionary principles of Lenin, Stalin and Mao.” — Ad Hoc Committee, 1962.

Among the Maoist organizations to arise out of the political tumult of the 1960s was a group known as the Ad Hoc Committee for a Marxist-Leninist Party (initially called the Ad Hoc Committee for a Scientific Socialist Line). The entity, begun in 1962, was said to be a secret faction within the US Communist Party working against the “revisionism” of Nikita Khrushchev and US party leader Gus Hall. That the entire operation was an FBI construct was a mystery to all but a handful of FBI agents and informants.

The group began with an ambiguously named publication known as the “Ad Hoc Bulletin.” The inaugural issue was titled, “Whither the Party of Lenin,” a denunciation of Nikita Khrushchev for his “shameful retreat” during the Cuban Missile Crisis. Its second bulletin, picking up on the theme of the first, charged the US party with revisionism (revising Marxism in a non-revolutionary direction), “parroting Moscow’s soft line approach to imperialism.” It also called out the Kennedy Administration as a “fascist type administration,” which the CP was accommodating. A later issue, appearing in August 1963, insisted that, “All who share the revolutionary spirit of Marx, Lenin, and Stalin have watched with disgust the deterioration of our Party since the days of the militant leadership of comrade [William Z.] Foster.” The message was clear: There was a radical faction operating within the CP standing in opposition to the current leadership.

As hyper-radical as the AHC came across, the force behind the program was an FBI Special Agent named Herbert K. Stallings. Stallings, in an internal FBI memo, is described as an “agent of high intelligence and tremendous imagination” whose “knowledge of Marxism-Leninism is broad and outstanding” (SAC Chicago, To FBI Director 1/22/1964). Under Stallings’s tutelage the Ad Hoc program continued for fifteen years, targeting not only the CPUSA, but the emergent New Left.

The Ad Hoc program, part of the Bureau’s infamous Counter Intelligence Program (COINTELPRO), aimed to reach those who had stayed in the CPUSA throughout the turmoil of the 1950s who still had revolutionary aspirations. In that respect, the impact, from the Bureau’s perspective, could not have been better:

Party members have resigned or stopped attending meetings or have joined left wing caucuses. The number in this category is unknown; however, there are six in a caucus headed by [REDACTED] out of the Railroad Club [Party Unit or Cell] alone.... We feel that the total loss to the CP in expulsions, resignations, and those boycotting meetings could number approximately 25. (Freyman file 1/22/1964)

Following the path of the Ad Hoc Committee is no simple matter. If one were to attempt a diagram, it might come across as a fantastic conspiracy theory with intermingled connections; some firm, some tenuous. For example, the Progressive Labor Party, a pro-Communist Chinese group formed by former members of the Communist Party, is tied to the AHC. Thus we hear, Gerald Kirk, an African-American student in Chicago, Communist Party member, and FBI informant testifying before Congress in 1970:

Kirk, who did not know the true nature of the AHC, offers a description that is inaccurate, yet nonetheless provocative. The Progressive Labor Party (PLP) was started by actual communists, the former CP members Morton Sheer and Milton Rosen — and was not an offshoot of the AHC. It is the case however that the Ad Hoc Committee political “line” and the line of the Progressive Labor Party had key similarities. In that respect, it is hard to conceive of the FBI not using its Ad Hoc Committee instrument against PLP. Kirk’s statement – which left a confusing narrative — raised far more questions than it answers.

The AHC also appears in the person of Morris Childs. Childs, who had been a leader in the Communist Party in the 1930s and 1940s, including a stint as editorial director of the Daily Worker, had been forced out in the wake of the anti-Earl Browder movement inside the party — Browder having been the leader of the CP in its peak years. Childs, however, returned to the Party, with the assistance of the FBI’s Carl Freyman (Special Agent Stallings’s supervisor), who arranged to pay Childs’s medical bills — he had a serious heart condition — in return for his becoming a Bureau informant. Childs would go on to become Gus Hall’s liaison with the Soviet Union, and the FBI’s most highly placed informant in the Communist Party for decades. Among his papers in Stanford University is a full set of Ad Hoc Bulletins suggesting not only his awareness of the program, but given the political sophistication of the latter documents – and his privileged position as key informant and CP leader — his participation.

Then there are the New Left leaders, Jeff Jones and Bill Ayers of the Weathermen. Jones and Ayers, as Art Eckstein documents in his book Bad Moon Rising – met with the leader of a “Chicago Maoist group” in December 1969 who pitched a scheme to the two. The “Maoist” told them that the Chinese Communist wanted to support their group in return for their keeping the Chinese Party apprised of what they were undertaking. According to the Bureau, the Weathermen sent greetings to the Chinese but declined the offer. Ayers later told this writer that he recalls no such meeting and it is possible the Bureau has identities confused; however it need be noted that the report is part of an internal FBI memo authored by Stallings and was not written for public consumption. While the identity of the “55-year-old Maoist” is unclear — the Stallings memo describes him only as “a Chicago informant, a man of 55 who was a leader in a pro-Chinese communist group in Chicago” — all in all it sounds a lot like an Ad Hoc Committee operation.

The AHC vehicle was also used to identify individuals for further investigation.” For example, Robert Fitch, an anti-war activist and later a founding member of the Maoist, Revolutionary Union, naively wrote to the Ad Hoc Committee in 1967, after seeing their advertisement in the left-wing newspaper National Guardian. His letter, in turn, went to the FBI:

[O]n 11/8/67 (date) that the captioned individual [Fitch] was in current communication with an organization which circulates communist literature which is ‘anti-revisionist’ and anti-Soviet Union, but which espouses a Marxist-Leninist line of the Communist Party of China. (From SAC Chicago FBI to SAC San Francisco, 11/15/67)

The file contains a photocopy of Fitch’s letter along with the envelope it was mailed in, addressed to the Ad Hoc Committee at their Post Office Box in Chicago.

The Ad Hoc Committee would soon appear regarding the Revolutionary Union (RU) itself — a group of key interest to the Bureau as it was assuming the “China franchise” that Progressive Labor Party was relinquishing. In the case of the RU, the Bureau appears to have used the radical bona fides of the AHC to introduce an informant, Don Wright, into the Revolutionary Union.

Wright, an African-American man, was said to have been in the Black Panther Party in Chicago — though there was no evidence of this. He also is an alumnus of a group that appears to have been the Ad Hoc Committee. As a leader in the RU at the time later described:

From back before Leibel [RU leader Leibel Bergman] had left the Communist Party in the late ‘50s, he had known this guy, DH [Donald Herbert Wright, known as DH Wright, or simply DH]. Within the CP some sort of caucus, or a sort of semi-secret group, had formed that was supposed to be more radical than the CP itself. And this guy DH had been part of this grouping in a loose sense, even while he had also been part of the Chicago area Panthers for a while (Bob Avakian, From Ike to Mao and Beyond, 27).

According to the Bureau, Wright’s FBI file has been “destroyed.” However, given his leadership role, he repeatedly appears in other files; those files in turn have copies consistently routed to the Bureau’s “AHC” file.

After Wright started working with the RU in 1970 he was rather quickly able to ascend to a position on that group’s secretariat, its four-person leading body. Wright’s chief accomplishment in that position appears to have been in assisting in the break-up of a coalition that had been established to form a new, pro-Maoist, Communist Party in the US.

Specifically, Wright was the RU representative on the National Liaison Committee (NLC) consisting of the Revolutionary Union, the Black Workers Congress, the Puerto Rican Revolutionary Workers Organization (formerly the Young Lords Party) and the Asian-American radical group, I Wor Kuen. Using his unique position, Wright worked to sabotage things — arguing that the notion of a multi-national grouping was anathema to the need for independence of Third World revolutionaries. In other words, Wright, who had been tasked by the Revolutionary Union with bringing the groups together, played a critical role in driving them away from one another.

Not surprisingly the “Ad Hoc Committee for a Marxist-Leninist Party” — which by then had been around for ten years without making a single step toward founding such a Party — weighed in, unsolicited, with a position quite similar to Wright’s. Writing to the New Left newspaper, the Guardian, they proclaimed that the “time for building a multinational party has not yet come.” The net result of all this was that the coalition fell apart and the Revolutionary Union was forced to form a Party without the presence of the other groups.

The story of the Ad Hoc Committee is only now coming to light. The full reach of the program and all that it was involved is still largely hidden. The National Archives is currently in the process of reviewing 15,000 plus pages and will in the next year or so begin incrementally releasing the file. When that happens, some things will likely become clear, and it is quite likely that our understanding and assumptions of key aspects of that time, will change.