Does Presidential Character Matter in a Polarized Age?

Donald T. Critchlow is a Professor of History at Arizona State University. His latest book is Republican Character: From Nixon to Reagan (2017). 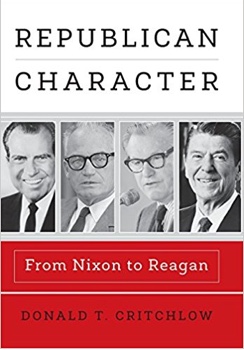 Surveys from Pew Research and Gallup reveal that voters today are more ideologically polarized than at any time in modern American politics. Conservatives debate who is a real conservative; progressives argue over who is a real progressive. We have in Congress Republicans and Democrats refusing to support legislation because it’s seen in their eyes as a betrayal of principle, as if legislation is not about compromise and hammering things out in committee. One might suggest that those who see politics as only that of maintaining purity of principle should be in a monastery. Those who believe politics is only about opportunity should call themselves leaders.

In this highly polarized age, questions naturally arise: Should ideology trump character when judging a presidential candidate? The 2016 presidential election between Donald Trump and Hillary Clinton showed arguably that many voters decided that character was less important than ideology. Ideology seemed to matter more, although it was not clear where Trump stood ideologically, and many conservative pundits in Washington repudiated him on these grounds, as well as the flaws they saw in his character. For most voters who cast their ballots for Trump neither ideology nor character seemed to matter.

Perhaps the more important question is whether ideology has been given too much importance in judging candidates or in understanding American politics, past and present. Yet in the real world of politics, a closer examination shows that a focus on ideology misses the drama, the give and take, and the strange alliances that form in the course of seeking office. This proves especially the case in presidential politics as seen in the careers and presidential campaigns of Richard Nixon, Nelson Rockefeller, Barry Goldwater, and Ronald Reagan.

A close examination of these presidential aspirants reveals many anomalies that cannot be explained simply by ideological adherence. For example: How can one explain that Richard Nixon offered Nelson Rockefeller a slot on the 1960 ticket as Vice President and did so again in 1968? (Nixon’s Democratic opponent, Hubert Humphrey also offered Rockefeller a place on his ticket.) Can the so-called Compact of 5th Avenue, in which Nixon accepted Rockefeller’s revisions to the 1960 Republican platform, be dismissed simply as opportunism on the part of both Rockefeller and Nixon? How does a student of American postwar conservatism explain Goldwater’s attempt to shift to the moderate center in his 1964 general election campaign after winning the ticket espousing strict conservative principles in the primaries? Furthermore, how is a historian to explain Goldwater’s behind-the-scenes alliance with Nixon to prevent Reagan from winning the nomination in 1968? Or, what should we make ideologically of Goldwater’s endorsement of Gerald Ford in 1976 against the Reagan primary challenge? For that matter, what is one to make of Reagan’s selection of George H.W. Bush as his running mate, or Reagan’s subsequent selection of Bush’s campaign manager James Baker as his White House chief-of-staff?

My new book, Republican Character, challenges standing histories of the Republican Party and the conservative ascendancy. It does so by exploring four Republican contenders for the presidency during the height of the Cold War—Richard Nixon, Nelson Rockefeller, Barry Goldwater, and Ronald Reagan. There were many twists and turns in these men’s careers and their presidential campaigns. There is much new in the book that will appeal to political junkies, but it says something to a larger audience about the importance of character and temperament to good leadership. This is a message for Democrats and Republicans, progressives and conservatives.

Nixon won the 1968 election running as the “New Nixon,” which projected a softer image to the voters. He avoided taking tough stands on issues until the last month of the campaign when polls showed his opponent Hubert Humphrey closing the gap; at this point, Nixon began to hammer Democrats on the law and order issue. Nixon’s image—the New Nixon—was a way of countering opponents who had portrayed him since he first entered Congress in 1946 as a man with deep character flaws. Whether this picture of Nixon as “Tricky Dicky” was fair or accurate about the young Nixon, his presidency revealed that he had become a flawed character by the time he entered the White House. Nixon accomplished much in his administration, but his secretive, nearly paranoid, response to political enemies, and his unlawful attempt to cover up the Watergate break-in during his reelection campaign in 1972 forced him to resign from office.

Goldwater and Rockefeller failed in their attempts to win the White House, so it is impossible to reach a firm conclusion as to what kind of leaders they might have been in office. Goldwater’s behavior during the 1964 campaign suggests that he was too quick to anger, given to shooting from the hip, and was thin-skinned. Such qualities usually do not make for successful presidencies. Goldwater as president would probably have resisted the Great Society program promoted by Lyndon Johnson. In addition, a Goldwater presidency would have confronted a black civil rights movement that was becoming increasingly militant. Goldwater’s refusal to vote for the Civil Rights Act of 1964 undermined his creditably among black and many white voters on the issue. His Southern base would have hampered Goldwater from promoting further civil rights legislation to ensure black voting rights in the South. What Goldwater’s response to the war in Vietnam would have been is an intriguing case for counter-factual history. He might have avoided a land war in Vietnam, having seen the stalemate in the Korean War but, on the other hand, he might have unleashed an air campaign in the North that would have encountered fierce opposition from the Soviet Union, as well as an antiwar movement at home.

A Rockefeller presidency in 1968 would have faced strong sentiments for an expansion of the welfare/entitlement and regulatory state espoused by liberals in the Democratic Party. Rockefeller presented himself as a reformer who supported more federal funding to address urban problems and income inequality. Johnson’s Great Society under a Rockefeller presidency might have become the even Greater Society. Given that Henry Kissinger was originally a Rockefeller advisor, Rockefeller’s foreign policy would have resembled in all likelihood Nixon’s, and feature détente with the Soviet Union, the opening of relations with China, strategic arms control deals, and selected covert military operations against hostile governments.

Nixon, Rockefeller, Goldwater, and Reagan were not pure political ideologues; they were politicians seeking power for their own advancement, often at the expense of party loyalty and their espoused political beliefs. Their political careers can be weighed on a scale ranging from opportunism to principle. All of these men were partisan Republicans and all understood the importance of ideology as a force in modern American politics, but they were politicians above all else.

These four men, rivals for the presidency, were neither complete saints nor sinners. They were men with flaws. Whatever their motivations as they ran for the highest office in the land, they sought to serve their country. Their ambitions might have been directed to other avenues rather than in presidential politics. Instead, they offered themselves to the voters because they believed they could lead the nation to a better future. History will judge them accordingly, as it will future presidents.