Have You Ever Heard of the British-American War Over Oregon in 1846?

William Lambers is the author of the Road to Peace and partnered with the UN World Food Program on the book Ending World Hunger. He writes on Huffington Post, the Hill and many other news outlets. 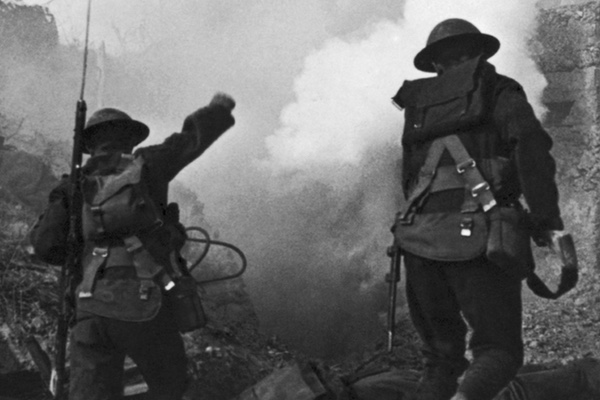 Just eight days before the November 11, 1918 Armistice ending World War I my great uncle, Ira Pitzer, was killed during battle in France. His mother was overcome with grief for the rest of her life, a tragedy shared by so many families who have served in the military.

Veteran's Day is to honor the service and sacrifice of the men and women in the armed forces. But Veteran’s Day should also mean something more, an inspiration to win a lasting peace.

As President Dwight Eisenhower once proclaimed on Veteran's Day, "Let us reconsecrate ourselves to the task of promoting an enduring peace so that their efforts shall not have been in vain."

As a nation we must be committed to ending wars. We owe that to those who have fought to stop aggression overseas and given us a chance to build peace, freedom and prosperity.

Imagine being a soldier in the First World War as the Armistice arrived. Surely the world would come to its senses after a slaughter that claimed tens of millions of lives.

As hard as those soldiers fought during World War I, they deserved a lasting peace. But yet within two decades there was World War II, with even more destructive weapons. Since that time there have been many regional conflicts.

The aftermath of World War I is referred to as the Lost Peace for that reason. But we should never give up on that dream of a world without war. We must strive for peace.

Resolving conflicts requires U.S. diplomatic power. We must deploy more peacemakers everywhere there is the threat of violence. War is not always inevitable.

Have you ever heard of the British-American war over Oregon in 1846? Exactly, because it never happened.  Diplomacy and peacemakers prevailed instead of taking up arms.

An American diplomat named Albert Gallatin wrote peaceful letters that were read in Britain. Gallatin helped calm U.S.-British relations at a time of great tension over which nation owned the Oregon Territory. Preparations were made for war. Instead the Oregon Treaty of 1846 resolved those boundary issues without fighting.

The Cuban Missile Crisis of 1962 brought the U.S. and Soviet Union to the brink of nuclear war. Diplomacy led by President Kennedy prevented the ultimate disaster. Within a year the two nations took some steps away from war with the establishment of a hotline for communication and a treaty limiting nuclear testing.

This is an important lesson for us today while the risk of war with nuclear-armed North Korea remains high. Diplomacy is imperative in the age of nuclear weapons. As President Ronald Reagan once said "A nuclear war cannot be won and must never be fought."

Another lesson in peace building comes from Captain Thomas Orbison of the U.S. Army, who was assigned to relief in Latvia after World War I. War always results in food shortages and hunger for the affected nations. Orbison, a doctor, had this noble idea called "the gospel of food for undernourished children." His commanding officer, Colonel John C. Groome, had one reply: “Go to it.”

Orbison and his fellow officers set up feeding programs for children in Latvia, a country which was ravaged by fighting after the Armistice. Captain Orbison wrote "One cannot describe the wealth of love, joy and satisfaction that flowed from those rag-clad women and children as they sat at the tables and ate their first satisfying and nourishing meal in a long, long time. The tears that were shed, the smiles through the tears, the silent look of real adoration on every face — one never forgets such an experience."

We should never forget the hungry children around the world, many of whom are in war zones. We should support infant feeding and school lunch programs to help these children recover. We cannot build a peaceful world if children are malnourished.

We could prevent many future conflicts if we eliminated hunger and gave nations that essential foundation for stability. Fighting hunger was a component of our Post World War II peace strategy, which the U.S. army was a major part.

As Eisenhower once said, "How can we expect children who are reduced almost to an animal-like level of existence, struggling each day for any kind of scrap that will keep them alive, how can we expect them to develop the ideas and the ideals that in the future will bring them to be apostles of peace?"

We need as many apostles of peace in this world today to prevent future wars. So there may come a day when soldiers do not have to deploy to lands far away that are in chaos.

On this Veteran’s Day to honor our nation’s military service members, let’s also commit ourselves to winning a lasting peace and bringing about an end to war.