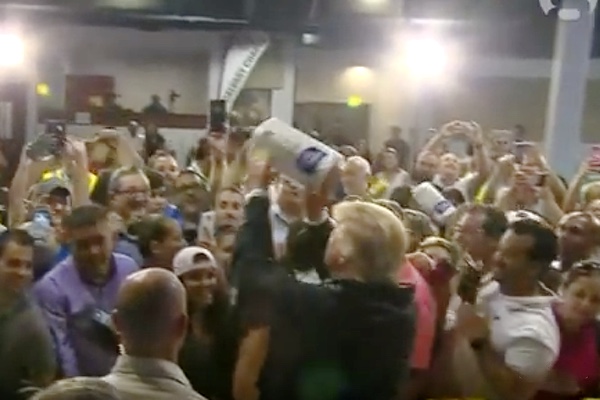 This past week President Donald Trump visited Puerto Rico, almost two weeks after Hurricane María devastated the island to such a degree that it may have paralyzed life for months to come. Today, an estimated 91% of Puerto Rico’s 3.4 million US citizens face another day with no electricity, unclean water, scarce food and a $40 cash limit for those lucky enough to join hours-long lines at an open ATM. Amidst the general dearth of common decency, adequate grammar and policy coherence that has now come to typify unscripted presidential appearances, the most remarkable aspect of Trump’s press conference and subsequent remarks may have been the utter absence of any outrage. Instead, self-congratulatory bombast and offensively paternalistic antics—what the New York Times called lobbying “praise and paper towels” at local politicians and ingratiating crowds—served as a substitute for the deadly serious assessment of conditions on the ground and the urgent need for our country’s top government official to explain what needs to happen, what hasn’t happened and why. Indeed, Trump’s sole message to Puerto Ricans was that fate had saved them from “a real catastrophe like Katrina” and that given their low “death count” of merely 16, “Everybody around this table and everybody watching can really be proud of what’s taken place in Puerto Rico.” In other words, Puerto Ricans should be grateful, said Trump, that the United States responded at all. Most importantly, Puerto Ricans should take pride in the fact that they aren’t dead—yet.

Surely no one disagrees that Hurricane Katrina’s total death toll of 1,833 in 2005 was a preventable national tragedy; however, given the lessons of Katrina, the US federal response to Puerto Rico’s crisis so far can only be qualified as an unprecedented national shame, an historic infamy we all bear precisely because it came 12 years after Katrina when the United States could have been prepared. In recent days, the chief of the US military’s disaster response operations to Katrina, Lieutenant General Russell Honore, said as much. In an NPR interview, Honore declared that the extent and nature of Puerto Rico’s crisis warranted a far greater immediate investment of federal forces and resources than Katrina ever did. “Puerto Rico is a bigger and tougher mission than Katrina,” he said. “And we had 20,000 federal troops, 20 ships and 40,000 National Guard. Now you figure that out.”

According to the Trump administration’s latest estimates, only 10,000 “federal workers” have been sent to Puerto Rico. While they might well be doing the “great job” Trump says they are, that number represents a mere fraction of the human resources Puerto Rico needs. The fact that so few Puerto Ricans have reportedly died is as much a testament to their own collective resilience as it is to the local government’s preparedness in the days preceding Hurricane María: after all, Puerto Rico, not to mention the US Virgin Islands (also comprised of US citizens) had just been ravaged by Hurricane Irma; they knew María was coming. The question is: where were the feds then? Where are they now? Does the federal government simply not care? After all, no one would ignore or dismiss the needs of 91% of the citizens of any state.

For millions of Puerto Ricans on the island and most conscientious observers here on the mainland, the answer to the question of whether the United States truly cared remains a resounding no. Although she inspired more rebuke from Trump than action, San Juan Mayor Carmen Yulín Cruz recently challenged him to remember his constitutional duty as President to “take charge and save lives.” If he did not, “the world will see how we are treated not as second-class citizens but as animals than can be disposed of. Enough is enough.” Cruz surely spoke for the vast majority of present-day Puerto Ricans living on the brink of despair and confronting the mounting disarray of broken sewage lines, blocked roads, irreparably damaged homes as well as an increasing need to evacuate hospitals and even whole towns. But Mayor Cruz also invoked the living legacy of the past when the United States forever changed the course of Puerto Rico’s political and economic destiny by invading the island in 1898, only conceding partial citizenship rights to Puerto Ricans, beginning in 1917.

In 1898, the head of US forces General Nelson Miles promised that the United States had brought “the fostering arm of a nation of free people, whose greatest power is in justice and humanity to all those living within its fold.” We had come, said Miles, “to bring you protection, not only to yourselves but to your property, to promote your prosperity, and to bestow upon you the immunities and blessings of the liberal institutions of our government.”

Today, fully one hundred years after the United States granted Puerto Ricans the title of citizens in 1917, their island remains an unincorporated territory whose residents have no right to vote for President. Puerto Rico’s single representative to the US Congress still has only a “voice” but no vote—even on legislation pertaining to Puerto Rico. Regardless of whether island Puerto Ricans want their island to become a state and say so, as they did in a recent island plebiscite, their will doesn't matter by US law. Only the US Congress has the legal authority to decide the political destiny and long-term social and economic consequences of US policy toward the island that millions of Puerto Ricans, our fellow Americans, call home.

Puerto Ricans may have no vote in Congress and certainly no “protector” of their property, their prosperity or their political equality to other US citizens in Donald Trump; yet today, 5.4 million Puerto Ricans reside in the mainland United States. Given the choice that US citizenship grants those who currently live in Puerto Rico to leave their ravaged island behind and move to the United States, Trump’s latest assault on the political dignity of islanders may ironically be his undoing. Deprived of the right to vote for representation in our federal government, Puerto Ricans will nonetheless surely vote. They will vote with their feet by coming by the hundreds of thousands, if not millions, to the mainland United States. Between Puerto Rico and the mainland, there is no wall. History itself has provided a bridge.