by Stuart B. Schwartz

Stuart B. Schwartz, George Burton Adams Professor at Yale University, is the author of Sea of Storms: A History of Hurricanes in the Greater Caribbean from Columbus to Katrina. 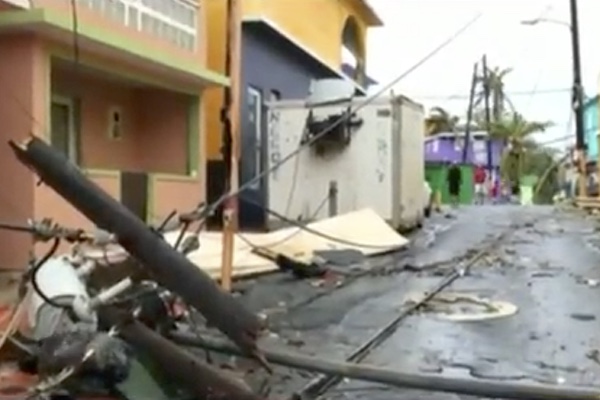 Hurricanes are no strangers to Puerto Rico. On that island, where the storms were named for the Saint’s day on which they occurred, most Puerto Ricans can tick off the major storms by heart: San Ciriaco (1899), San Felipe (1928) San Ciprián (1932), Santa Clara (1956), Hugo (1989). Now, sadly María will be added to the list. Over centuries the islanders have developed creative responses and techniques of communal cooperation that have allowed them to cope and survive, but the island’s current political and financial crisis and its problematic political status makes coping with this disaster and plans for a recovery far more difficult. 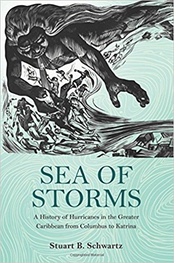 Wherever they strike, the results of hurricanes are disheartening similar. The terror of wind and water, the tears shed for loved ones, the frustration and pain of crops lost and homes destroyed, the constant discomforts, and the threat of sickness and hunger that follow, are common everywhere, but natural disasters are never natural. They are always the result of what peoples and governments do before and after the event. The hurricanes in Puerto Rico, because of its long and problematic relationship to the United States, are embedded in a specific political and economic context that determines their long-term effects. This will be as true of Hurricane María as it was of all the previous storms.

In fact, a tremendous hurricane was the midwife of Puerto Rico’s birth as a territory of the United States. The San Ciriaco hurricane of 1899, a Category 4 storm, struck while the island was still under military occupation just a year after the Spanish American War. While San Juan was relatively spared, Ponce, the second largest city, and the coffee producing highlands of the island took a major blow. The economy was left a shambles. The coffee crop was lost, as was half of the smaller sugar crop, and most of the food crops. About 3,000 people died directly from the storm, but mortality rates remained abnormally high for a year afterwards. Over 250,000, a quarter of the island’s population, were left homeless and destitute. “Hunger had established its empire,” wrote one observer.

The military governor of the island granted a remission of taxes, and although Congress voted no funds in relief, a tremendous charity program was mounted in the U.S. based on genuine sympathy, but also on the desire by the U.S. government to demonstrate its efficiency and its benevolence to the Puerto Ricans.

But charity had its limits, and in the post colonial Caribbean as with Puerto Rico after Hurricane Maria there was a suspicion that the population is lazy and will not help themselves. There was a deep fear among the military governors and the coffee and sugar planters on the island that public assistance to the indigent and homeless would turn the working class into beggars, because the islanders were “a people whose every tendency is in that direction.” So the relief distributed by the Charity Board on the island was given not to the victims, but to the planters, and in order to receive any, workers had to sign contracts that lowered their traditional wages and made them even more dependent.

Some simply left the island and went to Hawaii to cut sugar cane, some to build a railroad in Ecuador, others – dockworkers, sugarcane cutters, carpenters, masons, and printers began – after their original shock – to organize and strike. The response to the hurricane reinforced planter control, favored the growing sugar sector that now received infusions of U.S. capital, and it created an image of an island and its people unable to fend for itself.

When, in January 1900, Congress began to decide the future status of Puerto Rico, the San Ciriaco hurricane became part of the debate. Some witnesses favored granting the island free trade, a relief from taxation, and other benefits to stimulate its recovery, but protectionists warned that American farmers also had to contend with natural disasters, or that humanitarianism toward the Puerto Ricans might produce costs to the American taxpayers elsewhere, and that allowing importation to Puerto Rico without taxation would be a violation of the government’s principles. In the end, the precarious condition of the island contributed to the decision not to grant Puerto Rico independence, but to annex it as an “unincorporated territory” of the United States, subject to U.S. tariff and financial regulations, with less autonomy than it had enjoyed in its last years under Spain, and with no grant of citizenship to its inhabitants.

About thirty years later a major storm struck again. A September, 1928 hurricane that battered the Bahamas, hit West Palm Beach and killed over two thousand West Indian workers around Lake Okeechobee had first passed over Puerto Rico where it left a third of the population (500,000 people) homeless and hungry and the island looking, as the governor reported, like the battle-scarred areas of France or Belgium. The entire coffee crop was lost, and that industry never recovered. By this time Puerto Ricans were now citizens (Jones Law 1917). The U.S. appointed civilian Governor Towner asked for an interest-free loan to the island, and his request was supported by Spanish-speaking Republican Senator Hiram Bingham of Connecticut (the former Yale professor, discoverer of Macchu Picchu), who had led a congressional committee to the island, but Midwestern senators and congressmen, reluctant to support federal aid projects, objected to grants to “unworthy” persons who might receive something for nothing. Two million in aid was finally extended to the island, but only as an interest-bearing loan.

Much of the relief effort in 1928 had been in the hands of the American National Red Cross that after 1900 had become in effect a branch of government, even though it was financed by private contributions and staffed by private citizens. This arrangement allowed Congress to maintain the fiction that disaster relief was still a local, religious, or private concern and not necessarily a government responsibility.

But that idea was now seriously in question. As historians Raymond Arsenault and Michele Dauber have pointed out, the Miami hurricane (1926), the Mississippi floods (1927), the Okeechobee and the Puerto Rico hurricane (1928) changed attitudes about government responsibility, and the crash of 1929 and the Depression that followed made it clear that private charity and local governments could not meet the challenges of floods, hurricanes, and the Dust Bowl. Expectations of federal aid were rising, and they were in place when Puerto Rico suffered again in 1931, and then with a major Category 4 storm in 1932 (San Ciprián). In the decade 1926-36, the most active hurricane period on record, increasing demands for the federal government to respond to “acts of God” for which the victims bore no moral culpability surely contributed to the rise of the welfare states in general, and to Roosevelt’s New Deal in particular.

Opposition, however, to the expanded role of government in responding to natural disasters remained an element in the ideology of limited government, but other U.S. interests could sometimes override it. By the time the Santa Clara (1956) hurricane battered the island in the midst of the Cold War, Puerto Rico’s status had changed. It had become a “Free Associated State, ” more integrated into the United States, and its populist governor, Luis Muñoz Marín with the help of federal agencies had repressed nationalists and political opponents. President Eisenhower, fearful of the spread of communism in Latin America, hoped to use Puerto Rico as a showcase, and while he emphasized the importance of local response and limited government, he nevertheless, declared a national emergency and appropriated millions for relief. In this case, U.S. political objectives had trumped the belief of limited federal responsibility.

But that ideology found increasing advocates by the end of the 20th century. This was made clear in the response to Hurricane Hugo (1989), which left $1 billion in damages in Puerto Rico and then $7 billion of losses in South Carolina. After that storm and Hurricane Andrew (1992) that devastated Florida, there were many complaints about the ineffectiveness of the responses by FEMA, the Red Cross, and the federal government, although after the damaging Hurricane Georges (1998) struck the island, the Clinton administration and Governor Pedro Rosello (father of the present governor of Puerto Rico) had worked well together.

In any case, there was a growing attitude that disaster relief was not a federal responsibility. The most extreme critique came from a conservative libertarian think tank (Ludwig von Mises Institute) that argued that government should not be involved at all in relief efforts, FEMA should be abolished, that taxpayers had no responsibility to storm victims, that laws enforcing evacuations or against price gouging for essentials were violations of individual freedoms, that a free market would avoid shortages and other problems, and that environmentalists who wished to limit construction on the beaches or impose stricter building codes were, in fact, the “professional foes of humanity.” While this was an extreme expression of neoliberal economic philosophy, elements of such reasoning are still very much present as part of an attitude of limited responsibility and fiscal austerity in response to natural disasters as we saw in some of the congressional response to Hurricane Sandy.

This intersection of natural disaster and Puerto Rico’s relation to the United States provides the deep historical background to the incredible and horrifying devastation caused by María The effects of that storm repeat the past, but the island, now with a population of 3.4 million and faced with a collapse of its power grid, communication and transportation systems, hospitals, and fuel supply, faces a humanitarian crisis of enormous proportions created not only by Hurricanes Irma and María, but by the crippling economic and financial situation of the island that has weakened its infrastructure for years by diverting funds to servicing its debt while conditions on the island, and the conditions of its citizens have suffered.

Its per capita income is lower than any of the 50 states; its level of inequality is higher. In the two years prior to María’s arrival, there had already been considerable population loss, and an outmigration was already affecting the tax base and the quality of life. Emergency plans for response to a natural disaster were painfully deficient and underfunded. Prevented by Congress from restructuring its debt through bankruptcy and led by a political elite obsessed with creating conditions which might make statehood possible, and so has favored austerity measures, the reduction of the public sector, and privatization (the major airport is leased by a Mexican company), the ability of the island’s government to respond to the immediate crisis or to the underlying structural problems has been seriously compromised.

The initial response of the U.S. government has evoked memories of Katrina: slow, poorly implemented, but self-congratulatory. A week after the storm, no emergency had been declared, distribution of aid outside of San Juan has been little or none, the military was not quickly mobilized to provide logistics, and perhaps because its citizens can not vote in federal elections and its representatives in Congress have no vote, Congress exhibited no haste in providing the necessary aid to Puerto Rico as it did to Texas and Florida after Hurricanes Harvey and Irma. The pall of bureaucratic inefficiency and lack of urgency with hints of racial and neocolonial attitudes about people who are incapable of caring for themselves or want “something for nothing,” have now become part of the response to the situation. What comes next, given the financial situation of the island and the measures of austerity and drive for privatization already in place, will reveal, just as it has previously done in the island’s history with hurricanes, the real status of Puerto Rico and the attitude of the U.S. government toward these American citizens.