How Maligning Others Made the Middle Class

Robert Wuthnow is the Gerhard R. Andlinger ’52 Professor of Social Sciences at Princeton University. He is the author of many works about American culture and society, including Red State Religion: Faith and Politics in America’s Heartland and Rough Country: How Texas Became America’s Most Powerful Bible-Belt State. His latest book is American Misfits and the Making of Middle-Class Respectability (Princeton University Press). 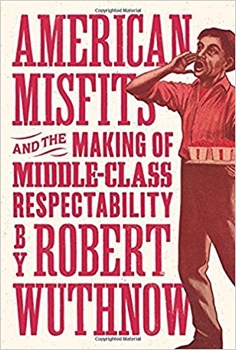 Erving Goffman in a 1956 essay observed that “In our society, the ‘well’ or ‘properly’ demeaned individual displays such attributes as discretion and sincerity; modesty in claims regarding self; sportsmanship; command of speech and physical movements; self-control over his emotions, his appetites, and his desires; [and] poise under pressure.”

Even then, there was less consensus than Goffman suggested, but it was possible in principle to describe what it meant to be a respectable member of the American middle class.

Today, it is difficult to assert anything about respect and respectability with such confidence. At every turn, standards of respectable speech and action appear to be up for grabs. More hate speech, maligning of immigrants, and racism populates the public square than many thought imaginable a few years ago. As the nation’s diversity has increased, so has the contention about what it means to be respectable.

How the nation dealt with diversity in the decades between the Civil War and World War I has lessons for us today. It was difficult then, as it is now, to specify positively what it meant to be a respectable member of the rising middle class. To be sure, there were markers of the kind Goffman described decades later. Respectable people lived up to their obligations, cared for their families, expressed appropriate love for their country, and for the most part kept their heads down. But how those norms were practiced varied widely. They differed from place to place and among the nation’s diverse religious, racial, and ethnic communities. Indeed, one of the keys to American democracy was that people were free in principle to work out their definitions of what it meant to be a good American in their own ways. G.K. Chesterton expressed it well when he observed that American democracy fundamentally stood for citizenship and nothing more.

If respectable citizenship was hard to define positively, it was nevertheless defined negatively. “Othering” defined respectability by negative example. “Misfits” were publicly labeled and shamed. And it was not only along the lines of race and religion and sexual orientation that remain so salient today. Even in relatively homogeneous, predominantly white, largely prosperous northern communities, “othering” was the common practice through which respectability was understood in the breach.

William Hall’s story is a case in point. Hall was a Union Army veteran who moved to Kansas after the war to start a farm and raise a family. In 1874 Hall suffered a nervous breakdown from illness sustained during the war and was declared “a lunatic and incapable of managing his own affairs.” He was institutionalized twice for short periods at the state insane asylum and in 1880 was admitted again, this time for good, dying there twenty years later. Hall’s story was one of thousands. The literature is rich with studies of mental illness, the rise of mental institutions, and the horrors that sometimes afflicted the residents of these places. Hall’s story is no exception, judging from records revealing the asylum’s mismanagement.

But there is another side to the Hall story. Buried in the dozens of affidavits and letters included in Hall’s Civil War pension file is evidence of how Hall and his family defined by negative example the community’s norms of respectability. Each time Hall was accused of being insane, the sheriff brought him to court to appear before a jury of twelve neighbors who heard testimony against him. His most troubling behavior was “religious enthusiasm,” which must have stemmed from his Methodist convictions as much as from the lingering trauma of the war. In his and similar cases, lunacy could be proven by a neighbor having noticed the accused acting strange or talking in a loud voice or being out too late at night or having heard gossip from another neighbor to that effect. The ensuing stigma naturally extended to the family. In Hall’s case, the wife and children dispersed to another part of the state. Absent the male breadwinner, the wife worked at a carpet factory and took in laundry; the children worked as farmhands and dishwashers. When the census taker came, she lied about why her husband wasn’t present. When the children grew up, they never spoke of their father.

Maligning that defined middle class respectability by negative example usually directed itself toward people who were struggling economically. Losing one’s farm from insanity was by no means the only path to becoming a misfit. Huckstering was another. The twenty-first century huckster who connives and swindles is an update of the nineteenth century huckster who was maligned for engaging in placeless labor. Unlike the farmer whose labor was rooted in the land or the shopkeeper whose location was fixed in town, the huckster lived in the interstices, peddling farm produce in town and town merchandise to farms. News stories depicted them as shifty. Coming and going as they did, hucksters were the first to be blamed if a petty crime occurred. Others who bore the brunt of maligning included “fanatics,” “seditious immigrants,” and “naughty boys.”

There was an interesting exception to “othering” people at the bottom, though. For years, there were also complaints about people at the top. The rich were not only “different from you and me,” as F. Scott Fitzgerald famously observed. They were also the focus of moral criticism. “Othering” the rich sometimes surfaced in biting satire, as it did in Mark Twain and Charles Dudley Warner’s The Gilded Age (1873), and at other times in Populist protest, as it did in the 1890s. In New York City, Rev. Dr. Charles H. Parkhurst of the Madison Square Presbyterian Church fought Tammany Hall by organizing women’s organizations, churches, and journalists to arouse moral indignation in hope of uniting men and women, educated and uneducated, native-born and foreign born. But it was unclear if plutocracy could be curbed by moral indignation alone. And by the end of World War I, high prices and rationing had again aroused the public to demand that something more be done.

On Saturday, June 19, 1920, a task force of government agents under orders from U.S. Attorney General A. Mitchell Palmer assembled at the Federal Building in Lower Manhattan, traveled to the Gimbel Brothers department store at Thirty- third Street and Sixth Avenue, made their way to the store’s eighth-floor executive offices, and arrested Frederick A. Gimbel on 185 counts of profiteering. The warrant charged Gimbel and his associates with selling clothing at exorbitant profit margins of 90 to 275 percent. Palmer was uncertain if legal action could do much to curb profiteering. The raid was meant for shaming as much as anything else. A few high profile arrests, he hoped, would do the trick.

But within a few years, the moral outrage driven by high prices and profiteering subsided. “Not so long since sermons on the rich man, the needle and the camel were very popular,” a writer for the New York Times mused. “Now it is taken for granted that the average millionaire has gained his wealth by rendering service.” An essayist for the Independent added in a more critical vein that bitter days for wealthy captains of industry were gone. “Silently they shuffled out of the limelight into the shadows; they became collectors of objects of art, builders of suburban palaces [and] owners of tax-exempt securities.”

It would not be the last time Americans had to worry about plutocracy.