No, Dinesh D’Souza, that photo isn’t the KKK marching to the Democratic National Convention 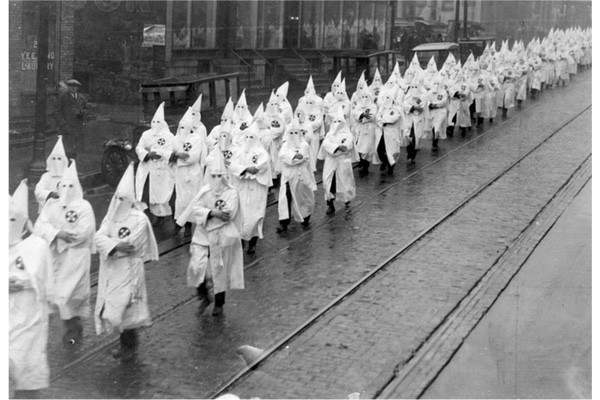 In December 1924, Ku Klux Klan members paraded in Madison, Wis., to attend the funeral of a slain police officer. The photo has been misidentified online as Klansmen headed to the 1924 Democratic National Convention in New York. (Wisconsin Historical Society.)

So, it may not have been a surprise to D’Souza’s fans when, on Sunday, he tweeted an old black-and-white photo of a Ku Klux Klan parade and claimed they were marching to the Democratic National Convention. D’Souza didn’t provide the photo’s date, who snapped it, or even who had the rights to it. But his caption did include a taunt aimed at Colin Kaepernick, the former San Francisco 49ers quarterback whose kneeling protests against police brutality during the national anthem have become the target of President Trump’s fury.

This being Twitter, it didn’t take long for others to unravel the big lie. Peter Shulman, an avid Twitter user who is an associate professor of history at Case Western Reserve University in Ohio, spotted the error. He tweeted a rebuttal to D’Souza, along with a link to the Wisconsin Historical Society, which features the photo on its website. The caption explains that the KKK marchers were parading down a street in Madison, Wis. in December 1924. They were on their way to the funeral of a police officer who had been fatally shot, allegedly by two Italians.