If Trump were really President, he’d Forgive Puerto Rico’s Debts and Rescue it

I’m not sure what Donald Trump thinks the job of president consists of. One task is to swing into action when 3.4 million Americans are living without electricity, 40% of them without potable water, and hundreds of thousands without shelter. When some 80% of its agricultural crops were wiped out. This is an apocalyptic scenario. We can’t even know what is going on very much because there is no wifi most places. Some entire towns haven’t been heard from! A dam may fail, endangering 70,000 people. It will take decades to rebuild.

As Daniel Gross (@grossdm) wrote on Twitter, “More US citizens live in Puerto Rico than live in the Dakotas, Vermont, Wyoming, and Alaska combined. I don’t see Congress lifting a finger.”

Trump himself only had insults to offer, when he wasn’t turning his full presidential attention to protesting athletes: 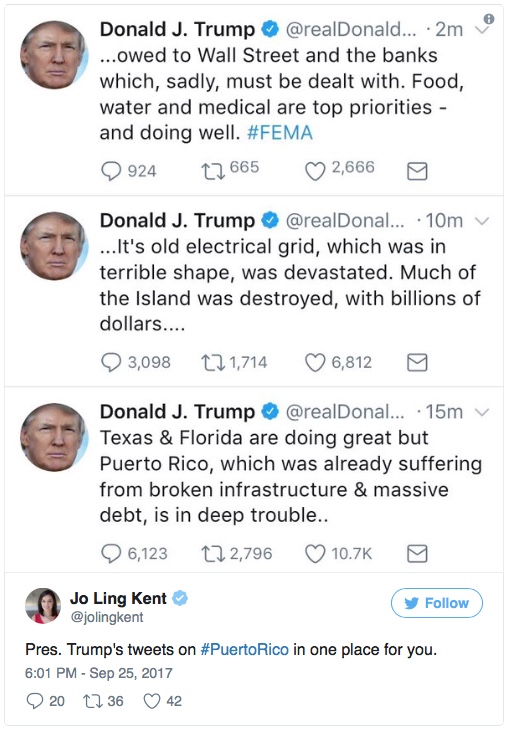 The United States conquered Puerto Rico away from the Spanish Empire in 1898. Unlike Cuba, which became a protectorate and gained independence in 1902, Puerto Rico became a Commonwealth or territory of the United States. The Jones-Shaforth Act of 1917 granted the island’s inhabitants US citizenship. In 1948, they were permitted to elect their own governor, and in 1952 they adopted a constitution for their Commonwealth. Puerto Rico, however, is not a state and so lacks Congressmen and the two senators that it should have.

In the first half of the twentieth century, the island was exploited by US sugar companies. Then low wages allowed the grown of industry. In 1976 Congress enacted Section 936 of the Internal Revenue Code, which exempted US companies from taxes on their operations in Puerto Rico. Hundreds of companies rushed to the island and opened factories. People’s incomes went up over the next twenty years as a middle class grew.

But then disaster struck. In the mid-1990s the catastrophic Newt Gingrich congress repealed section 936. Then it enacted NAFTA, removing tariffs with Mexico.

Remember, Puerto Rico is the United States. It uses the dollar. Federal minimum wage legislation applies there. With no tax break from the US government and given the relatively expensive cost of labor, Puerto Rico could not compete with the low wages in Mexico, now that Mexico also paid no tariffs to export goods to the US. Companies fled the island.

The only way to avoid a sudden plunge into dire poverty was to borrow money, and the Commonwealth’s debt ballooned to $70 bn. Beginning around 2000, families who could afford to began emigrating to the mainland. Hundreds of thousands of people left, which means that the remaining population is older and poorer and even less likely to be able to restore prosperity.

The decisions that plunged Puerto Ricans into misery were taken over their heads, and they were powerless even to enter the debate, inasmuch as they lack statehood and so lack representation in Congress. The mainland has casually ruined their lives with arbitrary legislation.

So you want to help Puerto Ricans, who are, remember, American citizens? Act like a president. Be decisive.

2. Put back effing Section 936 into the Federal tax code to encourage businesses to go to Puerto Rico and put its people to work.

3. Rebuild its electricity grid underground to protect it from hurricanes. Give special grants and tax breaks for installation of solar and wind energy and purchase of Tesla power walls. The global heating caused by the mainland’s carbon dioxide emissions ensures that the hurricanes will get worse and worse, and the island needs to be rebuilt to withstand high winds.

4. Give grants for people to rebuild their destroyed and damaged homes and businesses.

The US kidnapped Puerto Rico in the imperialist war of 1898, which was fought on trumped up pretexts. Washington exploited its sugar cane fields and then its cheap industrial workers, and the US navy benefited from its strategic position in the eastern Caribbean. The Puerto Ricans never asked for all this to happen to them, and never passed the laws that ruined their economy.

The least we can do is get the island back on its feet and put into place policies that will bring prosperity back.

As for those not in government, we can all donate at this site.