The Nazi Plan to Kill the Disabled: What the U.S. Government Knew and When It Knew It

Suzy Evans is a literary agent, attorney, and author who holds a Ph.D. in history from UC Berkeley.  Her books include "Machiavelli for Moms" (Simon & Schuster) and "Forgotten Crimes: the Holocaust and People with Disabilities."  Find Suzy on Twitter @thehistorychef and at suzy@dijsktraagency.com 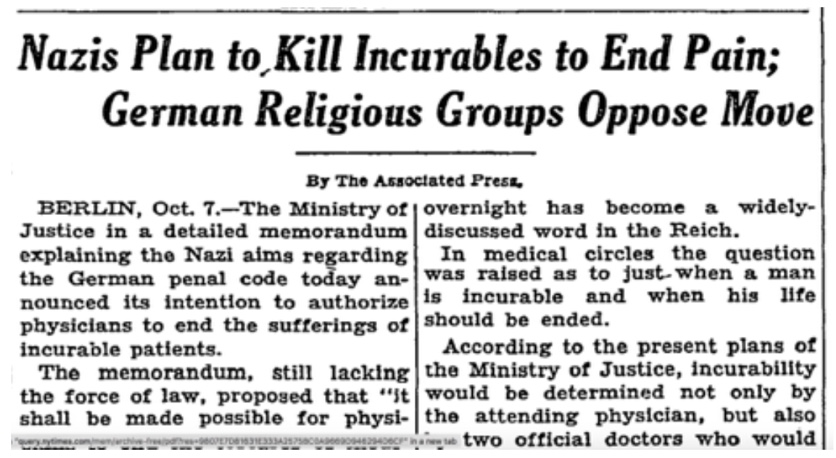 Between 1939 and 1945, hundreds of thousands of Europeans with disabilities were brutally exterminated by the Nazis but America did not respond. This raises many distressing questions: when did the American government become aware of these atrocities? If America could have intervened to save lives, why was this not done? And which persons, or groups of persons, were responsible for the American failure to act? 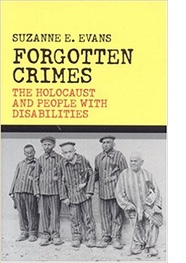 After the Nazi party consolidated its power in the March, 1933 elections, Hitler’s resolve to eliminate Germany’s "hereditarily unfit" intensified. This was reported in an October, 1933 New York Times article headlined, NAZIS PLAN TO KILL INCURABLES TO END PAIN; GERMAN RELIGIOUS GROUPS OPPOSE MOVE. Datelined BERLIN, the article revealed that "the Ministry of Justice in a detailed memorandum explaining the German penal code today announced its intention to authorize physicians to end the sufferings of incurable patients.” The memorandum proposed that it shall be made possible for German physicians “to end the tortures of incurable patients, upon request, in the interests of true humanity."

According to the report, incurability would be determined by an attending physicians and two medical experts who would “carefully trace the history of the case and personally examine the patient.” To quell fears of abuse, the Ministry of Justice assured the German public that, in “insisting that euthanasia shall be permissible only if the accrediting attending physician is backed by two medical experts who so advise, the Ministry believes a guarantee is given that no life still valuable to the state will be wantonly destroyed.”

After this early report, however, little information about the Nazi Aktion T-4 “euthanasia” program appeared in the American press until the early 1940s. This is partly because the program was not authorized by Hitler until 1939 and because most American journalists departed Germany shortly after the outbreak of war.

But the dearth of information is also due to the fact that Nazi officials went to great lengths to keep the disability killings secret. Unlike reports of the forced sterilization of Germany’s disabled population that could be verified against official government reports, information about the mass slaughter of the disabled was initially very difficult to confirm. Nevertheless, credible reports about the disability killings began to appear in the American press in the spring of 1941.

Among the first of these reports appeared in the New Republic in May, 1941. Under the headline, GERMANY EXECUTES HER UNFIT,Michael Straight, a former U.S. Department of State official, revealed that in the fall of 1940, “85,000 blind, incurably ill or aged Germans were put to death as casually as the SPCA chloroforms old and helpless dogs. They were not killed for mercy. They were killed because … the German hospitals were needed for wounded soldiers” and “because their death was the ultimate logic of the national socialist doctrine of the racial superiority and survival of the physically fit.”

In response to Straight’s article, the Washington Post ran an editorial on May 5, 1941 headlined, SLAUGHTER OF INNOCENTS. “The current number of the New Republic contains an accusation against the German Nazis at once so startling and terrible that doubtless four persons out of five who read it will reject it as merely a sample of an inevitable crop of atrocity tales,” the article began. “But the New Republic article is written by Michael Straight, formerly of the Department of State, who charges that last year the Gestapo quietly put to death 85,000 Germans who could make no contribution to the national war effort. These comprised the blind, the incurably sick, the mentally defective and the senile.” 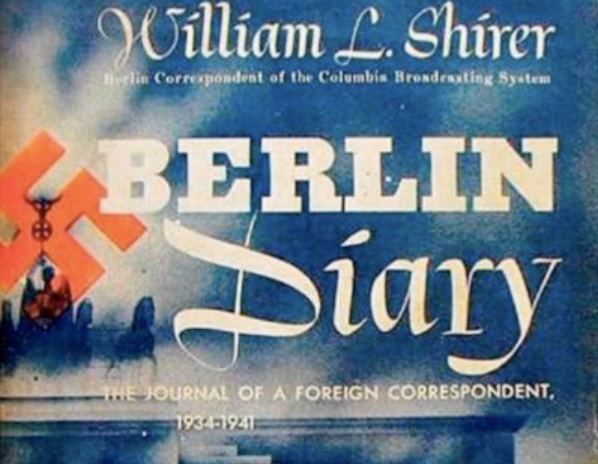 Six weeks later, on June 20, 1941, William Shirer’s BERLIN DIARY: The Journal of a Foreign Correspondent was published in the United States. A reporter for United International before moving to CBS, Shirer presented a first-hand account of the Nazis mass extermination of the disabled. In an entry labeled, BERLIN, November 25, Shirer wrote:

I have at last got to the bottom of these ‘mercy killings.’ It's an evil tale. The Gestapo, with the knowledge and approval of the government, is systematically putting to death the mentally deficient population of the Reich…In the end Hitler simply wrote a letter to the secret police administration and health authorities authorizing the Gnadenstoss in certain circumstances where persons were proved to be suffering from incurable mental or nervous diseases…I am also informed that the relatives of the unfortunate victims…receive a stern warning from the secret police not to demand explanations and not to spread false rumors.

The Germans, wrote Shirer, advanced three reasons for the killings: that they are being carried out to save food; that they are done “for the purpose of experimenting with new poison gases and death rays”; and that “they are simply the result of the extreme Nazis deciding to carry out their eugenic and sociological ideas.”

Mr. Shirer relates with unaffected and therefore genuine poignancy the experiences of men and women who had become mere moths cruising about an inexplicable flame. There are relatively pleasant details of Germans trying to joke their way in and out of shelters. There are gruesome anecdotes about battered towns in Flanders. And there are utterly horrible stories of mentally defective children, taken from sanatoria and put to death by the Blackshirts – mercy killings, so it is said.

Together, these and similar reports establish that between 1933 and 1941, the American press presented a considerable amount of credible information about the Nazi mass extermination of the disabled yet no governmental action was taken to save lives. The terrible question that remains today amid widespread ethnic cleansing and genocide is: why?