The Libertarian Dream Was Tried Here

Harry Blutstein is an Adjunct Professor in the School of Global Studies, Social Science and Planning at RMIT University. He is the author of the Ascent of Globalisation (Manchester University Press, 2016) and Cold War Games (Echo Publications, 2017). Since 1972, he has been a freelance journalist and has published feature articles in op-eds in major Australian newspapers on a wide variety of topics. He blogs at http://harryblutstein.com/. 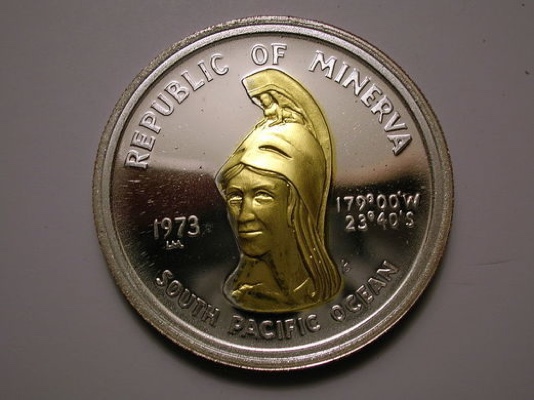 Libertarians have a dream. It is to create a floating colony, either using ships or artificial islands, located in international waters. Residents of these communities would be out of reach of sovereign countries, so they would not be bound by government rules and best of all, they would pay no taxes. It is called seasteading, which is being promoted by the Seasteading Institute.

You have to go back to the 1970s for the first serious attempt at seasteading, which was based on the idea that unclaimed island in the Pacific Ocean could be colonized by liberarians.

A Nevada-based real estate developer and coin dealer, Michael Oliver, had a dream.  A libertarian, he wanted to escape the overbearing clutches of governments. The only way to do so, he decided, was to create his own country, where there would be few or no rules.  In 1968, he published A New Constitution for a New Country, a practical guide on how to construct a new nation in which “people will be free to do as they damn well please.  Nothing will be illegal so long it does not infringe on the rights of others.  If a citizen wishes to open a tavern, set up gambling or make pornographic films, the government will not interfere.”  Income would be generated from fees from grateful banks wishing to establish offshore services—no questions asked—and offer transnational corporations a place to establish their headquarters without bothersome rules or taxation.  It would even issue its own currency.

Pulling together around 2,000 investors, Oliver established the Ocean Life Research Foundation.  With funds raised, Oliver’s first idea was to find a country that would be willing to sell his foundation one of its islands, over which the Foundation would declare sovereignty.  When he couldn’t find any takers, Oliver looked around for an unclaimed island that could become his libertarian paradise.

The best Oliver could do was Minerva Reef, in the middle of the Pacific, 500 km (260 miles) southeast of Tonga.  It had never been claimed, despite being discovered as far back as 1854.  There were, however, serious problems establishing a settlement on the reef, not the least being that the reef lies some three feet above water at low tide and about four feet under water at high tide.

Undaunted, in January 1971, Oliver and a small party went to Fiji, where they chartered a 54-foot motor sailer and purchased the materials to create artificial islands on the reef.  On their arrival at Minerva, the party unloaded large hunks of coral wrapped in chicken wire, concrete blocks, sand and other rubble, which allowed them to build two micro-islands on the reef.  On one of these islands, they built a small stone tower and hoisted its flag: a yellow torch of freedom on a solid blue background.  The founding fathers of Minerva hoped to expand the reclaimed land until it would eventually support a city of 30,000 citizens.

In February 1972, Oliver appointed Bud Davis the Provisional President of Minerva.  A former project engineer with North American Rockwell, he ran the new republic from the living room of his one-story house in Gustine, California.  From there, he mailed out a Declaration of Sovereignty to around one hundred nations, requesting recognition for the world’s newest principality.  The only head of state willing to strike up diplomatic relations was the Sultan of Occussi-Ambeno.  This coup lost its sheen when it was discovered that the Sultanate was a figment of the fertile imagination of Bruce Grenville, a New Zealand anarchist.

While the founding fathers of Minerva were romantics, they were pleased to find that they had counterparts in the business community who were thinking along similar lines.  For example, Carl Gerstacker, the chairman of Dow Chemical Company, startled his audience in 1972 when he mused:

“I have long dreamed of buying an island owned by no nation and of establishing the World Headquarters of the Dow Company on the truly neutral ground of such an island, beholden to no nation or society.  If we were located on such truly neutral ground we could then really operate in the United States as US citizens, in Japan as Japanese citizens and in Brazil as Brazilians rather than being governed in prime by the laws of the United States … We could even pay any natives handsomely to move elsewhere.”

Dow later brushed this quote off as a joke, but when questioned at the time, Gerstacker said he was “deadly serious.”

After reading a report about this speech, Oliver approached Dow to ask whether it would like to establish its world headquarters on Minerva.  Gerstacker did not respond, and the principality remained no more than a flag fluttering in the wind over a few square yards of debris that threatened to wash away in the next storm.

Unfortunately for Oliver, Australia did not take kindly to a privately-owned principality being created in its neighborhood and pressured Tonga, being the closest country to Minerva, to act.

Taking up the challenge was King Tāufa’āhau Tupou IV, the heaviest monarch in the world, weighing in at over 440 pounds. On June 21, 1972, he led an expeditionary force to invade the Principality of Minerva.  Without an army or navy to call on, the king recruited a five-man convict work detail to undertake the invasion and, to add gravis to the expedition, a four-piece brass band played the Tongan national anthem from on-board the royal yacht Olovaba to inspire the troops.  Taking courage, when he saw that Minerva was unoccupied, the king decided to personally lead his force.  Once the tide was out, the king went ashore.  After tearing down Minervan flag, he read aloud a proclamation of sovereignty.  The reef now belonged to Kingdom of Tonga.

When the king was safely back on board the royal yacht, his ragtag troops were left to dismantle the stone tower, which had been erected by Oliver.  What up until now had been a bloodless war turned nasty, as a fight broke out between two of the convicts, and one was killed. So, while the Principality of Minerva never had a live population, it was left with a single gravesite, which was all that remained of the shortest and smallest war in the history of the world, and even that grave soon disappeared, as did the Principality of Minerva when successive storms washed away its artificial islands.