Few Want to Admit It, but the French Saved America During the Revolution

Tom Shachtman is the author of How The French Saved America (St. Martin’s Press, September 2017). He has lectured at Harvard, New York University, Stanford, CCNY, Georgia Tech, the Smithsonian, the Library of Congress, the New York Public Library, and the Huntington Library. 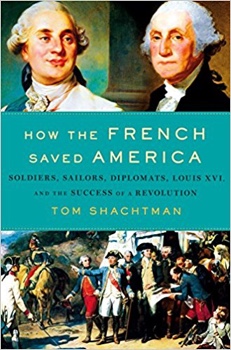 President Donald Trump, during a visit to Paris for Bastille Day, said, "France is America's oldest ally. A lot of people don't know that,” and added, “France helped us secure our independence, a lot of people forget.”

Our problem is not that we have forgotten France’s aid, without which the Revolution might not have been won at all, or not been won by 1783; it is that we are too beholden to our own myths to accept and appreciate how much we owe to outside assistance. Moreover, as John Adams predicted in 1790, "The History of our Revolution will be … that Dr. Franklin's electric rod smote the earth and out sprang General Washington. Then Franklin electrified him … and thence forward those two conducted all the Policy, Negotiations, Legislations, and War." Time has proved Adams correct: in regard to how we think about our Revolution, most Americans continue to be hostage to the belief that we have always been independent and self-reliant, and possessed of an endless ability to invent what we need when we need it.

Adams was afraid he wouldn’t be included in the pantheon. He is, but we need to broaden it to include those French who were key to our achieving independence: King Louis XVI; his foreign minister Charles Gravier, Comte de Vergennes; General Jean-Baptiste Donatien de Vimeur, Comte de Rochambeau; Admiral François-Joseph Paul, Comte de Grasse; and the Marquis de Lafayette, whose greatest service to America came in pressuring his sovereign to commit more help for the American cause. And there are a few others, whom I’ll identify below, who are worthy of being better remembered by us.

Well prior to declaring independence, Americans as colonists sought assistance from foreign nations. Congressional committees reached out in the fall of 1775 to friends abroad. It was soon forthcoming. France committed itself to support the cause even before learning of the British evacuation of Boston in the spring of 1776. Louis XVI and Vergennes’s willingness to clandestinely assist the American rebels, backed up by millions of livres of purchasing power, resulted in the dispatch to America, by Beaumarchais and Silas Deane, America’s first purchasing agent, of l’Amphitrite and other ships loaded with cannon, ammunition, clothing, and other munitions. This war matériel became a positive factor in the American army’s first big battlefield victory, Saratoga, in the fall of 1777.

By that fall, the French court’s indulgence had already encouraged dozens of battle-tested officers to take leaves of absence from its own forces to cross to America, among them Lafayette but also Louis Duportail, an engineer whose strategic counsel became highly valued by Washington and who founded the American Army’s corps of engineers.

We should take particular note of the contributions of two other French military engineers, Francois Fleury and Maudit du Plessis, who were of vital importance in the relatively unknown but strategically decisive battle to keep forts Mifflin and Mercer (on opposite sides of the Delaware River, below Philadelphia) in American hands until the river iced over in late 1777. Should the forts have been lost earlier, Washington told Congress, the Army would have been thrown “into such a situation, that we must inevitably have drawn on a general Engagement before our Reinforcements arrived, which, considering our Disparity of Numbers, would probably have ended with the most disagreeable Consequences.” Fleury later received one of only six Congressional medals for valor awarded during the war – and it was for another exploit, the Battle of Stony Point.

Much of French aid, that is to say, was in evidence well before the Franco-American pacts were signed in February 1778. Even then, France did not ally with the U.S. out of sympathy with our Revolution or its republicanism. Vergennes was a royalist mistrustful of democratic rule, and had first made the case to assist the American rebels to “prevent the spirit of independence from making an explosion so terrible in the British American colonies that its strength is communicated to our points of interest.” After Vergennes had seen more of the war, he made a balance-of-powers rationale: aiding the Americans would sap British might, and would be a start to undoing the damage to France from the peace terms of 1763 in which France had lost control of its own port of Dunkirk as well as of economically-vital “sugar islands” in the Caribbean. By distracting the British in America, he would also provide time and energy for France to reinvigorate her navy and reorganize her army for eventual direct confrontations with Great Britain.

An estimate of how valuable this was to France can be inferred from the terms of the Franco-American alliance, which were quite favorable to the U.S., and from the fact that throughout the rest of the war France stuck to them, refusing potential peace settlements unless they contained ironclad guarantees of American independence. French diplomatic skill also maneuvered Spain into the war on the side of France and the U.S., despite bribes offered by Great Britain.

When Rochambeau’s forces came to America in 1780 they did so under an extraordinary set of instructions from the king that had been dictated by Lafayette: “The general to whom His Majesty intrusts the command of his troops should always and in all cases be under the command of General Washington …. The French troops, being only auxiliaries, should on this account … yield precedence and the right to the American troops.”

Americans view the battle of Yorktown, in the fall of 1781, as the culminating, American victory of the war. But if we were more honest with ourselves, we would have to call it, at least, a joint victory, and possibly even a French achievement. Washington was not the designer – he wanted an attack on New York, and had made no plans for target Yorktown. The decision to go to Yorktown was actually made in a Haitian harbor by Admiral de Grasse and a Spanish strategist, Francisco de Saavedra, who agreed that de Grasse’s fleet should entrap the large British army on the Yorktown peninsula.

When that French fleet reached the peninsula, which it did prior to the arrival of the Rochambeau and Washington armies, it then fought a battle at sea whose outcome – French sails investing the bay and preventing British succor of Cornwallis by water – made possible the eventual surrender of Cornwallis. Its inevitability was heightened by Washington’s turning over of direction of the siege to Rochambeau, who had conducted 14 previous ones. Immediately after the surrender, and for the rest of Washington’s life, he acknowledged that Yorktown might never have happened but for the French, frequently referring to Rochambeau and de Grasse as the “co-adjutors” of that victory.

More French than Americans died in the sea and land battles of Yorktown. As for that, alongside the 25,000 to 35,000 American military dead of the Revolutionary War, at least 2112 French citizens also lost their lives – France was able to identify them each by name and city of origin. It’s time for us to more forthrightly acknowledge their and France’s contribution to our heritage, which, to use a Trump phrase, was huge.