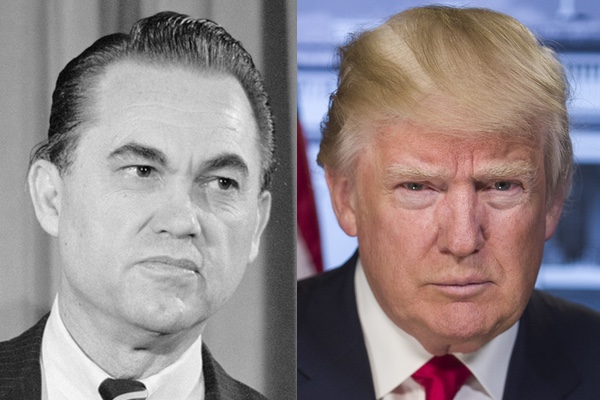 Former Missouri Republican Senator (1976-1995) John Danforth was, and remains, a highly respected public figure, seen as a man of principle and decency. He is not a publicity seeker by any means, so when he makes a public utterance, it is not something to be ignored or overlooked.

Recently, Danforth made the statement that Donald Trump does not represent core Republican principles, the kind that drove the public life of Abraham Lincoln, Theodore Roosevelt, Dwight D. Eisenhower, George H. W. Bush, and even George W. Bush, all upholding basic principles of justice and fairness.

Instead, Danforth makes the point that Trump is the most divisive political figure in national life since Alabama Governor George C. Wallace. Fifty four years ago and for the following decades, Wallace became a nationally noticed political leader, who sought the Presidency in 1964, 1968 (when he had the second best third party performance in all of American history), and 1972, until he became the victim of an assassination attempt, which ended that campaign. It left Wallace paralyzed for life, facing years of pain, suffering, and surgeries to attempt to make his life bearable for the 26 years he lived on until his death in 1998 at the age of 79.

Wallace drew support from white working class whites, not only in the South, where he won his 46 electoral votes in 1968, but also from millions in the industrial Midwest and rural areas of the nation, similar to Donald Trump’s victories in such places.

Wallace came from a lower but struggling middle class white background in Alabama, while Trump, on the other hand, grew up in wealth and privilege in an upscale community in Queens County, New York, with his father being a wealthy real estate magnate. So their family background and heritage were diametrically opposite.

But both developed a mental view that the way to advance oneself was to exploit race and ethnicity as a way to provoke an emotional uprising by insecure, struggling middle class whites. Wallace became notorious in 1962 when he ran for the second time for the Alabama governorship, and abandoned his earlier “liberal” view on race in the 1958 gubernatorial campaign, when he ended up last. After that, he made it clear that he would exploit the race card, and when he won the governorship, he became a nationally known figure, when in his inaugural address in Montgomery, the state capital, in January 1963, he made the famous utterance: “Segregation now, segregation tomorrow, and segregation forever!”

Wallace sought the Presidency against the new President, Lyndon B. Johnson in 1964, entering several Presidential primaries, and bitterly opposing the Civil Rights Act of that year. He became more controversial during the next four years, more incendiary in his public speeches at rallies, and then ran as the American Independent Party nominee for President in 1968, displaying demagogic techniques as he won five Southern states and 46 electoral votes. He continued to divide and incite the population again over the next four years, and was seen as a danger to Richard Nixon in 1972, until he was shot by assassin Arthur Bremer, who had been stalking Nixon before shooting Wallace in Laurel, Maryland, in May 1972.

After his unfortunate shooting and difficult recovery, well covered in my Assassinations book (Chapter 11), Wallace had a change of heart, and was asking for forgiveness from civil rights leaders in the last decades of his life, even while serving once again as the governor of Alabama (his fourth term). So one could say he reformed himself, apparently affected by the assassination attempt against him. It is unlikely that Donald Trump would ever reform, however, as he is a narcissist to the extreme, who has never admitted errors or faults in anything he has asserted or done in his public life.

Donald Trump had a background as a registered Democrat, always outspoken and controversial over the decades, but often seeming to be liberal in his views, although showing signs of racism in his real estate practices in Queens County, New York, as early as 1973, and his outrageous accusations against the “Central Park Five,” the case of the five African American young men accused of rape and assault in 1989. They were eventually cleared after years in prison, but Trump was unwilling to admit he had been wrong. He continued to insist in fact that they were guilty as charged.

Once Barack Obama became President, Trump’s move into open racism and nativism became endemic, as he accused Obama of “birtherism” without any proof. And he began his national campaign for President in June 2015 with attacks on Mexicans and calling for a Mexico Wall, and displaying extreme Islamophobia, issues that he utilized in gaining the backing of his followers. He refused to tone down his extremist and emotional tirades, which went much further than even George Wallace had displayed four to five decades earlier.

Both Wallace and Trump aroused crowds at campaign rallies, and ordered critics be thrown out; both attacked the news media as the enemy of the American people; both exploited the worst instincts of voters by exploiting their resentment, insecurities, and bitterness. Trump has continued this same approach as President.

So Senator John Danforth was accurate in stating that Trump has become the most divisive national political figure since George Wallace, with the caveat, however, that Trump is our President, and Wallace never came close to the Oval Office. While George Wallace divided the nation in his time, the danger that Donald Trump represents is far more menacing.