This Story About the Publishing of Mein Kampf Is Well-Known in France. Americans Need to Know It.

Dr. Blake Smith is a Max Weber Fellow at the European University Institute. 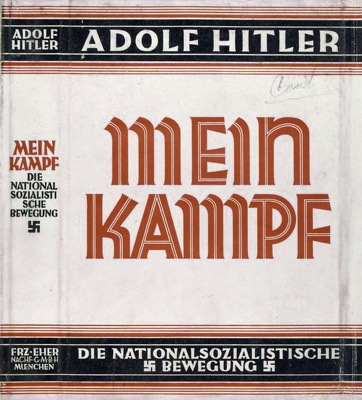 A growing number of Americans see freedom of speech not as an essential right, but as a dangerous tool of political extremists. Figures associated with the far-right, such as Ann Coulter and Milo Yiannopoulos, have been prevented from giving speeches at college campuses by threats—and acts—of violence. Millennials show unprecedentedly low levels of support for unconditional freedom of speech. As Jonathan Haidt observes, their support is likely to fall still lower in the wake of the violence in Charlottesville. Many young people on the left see freedom of speech as a mere tool for enabling white supremacists and neo-Nazis. Increasingly vocal activists insist that the 'alt-right' must be met with force, rather than given a platform to spread its views.

Yet there was a time when groups opposed to Nazism fought to spread Nazi views as widely as possible. In 1934, a surprising coalition of anti-racist and right-wing activists came together to fight for the right to publish Hitler's political manifesto Mein Kampf in France. They made strange bedfellows, broke the law, and were sued by Adolf Hitler himself. While they eventually lost their case, they spread word across France and the world about the peril of Nazism. They also showed that Hitler feared nothing more than a public airing of his real views.

This story is well known in France, and has recently reappeared in the news as Mein Kampf, first published in Germany in 1925, has fallen into the public domain. This story is hardly known in the United States today, but American political activists would benefit from its lessons.

Hitler published Mein Kampf well before the Nazi regime took control of Germany in 1933. His manifesto, which sprawls over several hundred pages, is filled with rants against Jews, democracy, France, and dozens of other perceived enemies. When Hitler came to power, however, he tried to disguise his hatreds and his long-term plans. Nazi diplomats made reassurances to foreign governments that the new regime wanted peace with all its neighbors. France was a special target of these efforts, because Mein Kampf bristled with attacks against the French. Hitler's propaganda services kept citations of Mein Kampf's anti-French passages from appearing in translation, and prepared special, edited versions of the book for publication abroad. But rumors spread, and observers in France wanted to know the truth.

A strange partnership was born. Fernand Sorlot, a publisher linked to the far right, prepared a translation of Mein Kampf into French with the financial support of the International League against Anti-Semitism and Racism, a leading left-wing organization that defended the rights of minorities. Sorlot's associates included Charles Maurras, leader of the political group Action Française, which fought (sometimes in the streets) for a return to monarchical government. Like many figures on the French right, Sorlot and Maurras were intrigued and alarmed by Hitler. While they shared his anti-Semitism, hatred of communism and contempt for democracy, they feared that his rise spelled danger for France. They had reason to be worried. Hitler was bent on avenging Germany's defeat in World War One. Mein Kampf is filled with passages that describe Hitler's fury that France had used soldiers from its African and Asian colonies against Germany during the war. The presence of non-European troops on the Western front, he wrote, had turned France into a “mulatto state,” a place of race-mixing and degeneration. It had to be crushed.

At the request of Maurras and others, Sorlot published a complete French translation of Mein Kampf in 1934, without permission from Hitler or Mein Kampf's German publisher. Although in other circumstances the League would have been an enemy of the anti-Semitic Sorlot, it quickly became his major supporter. It wanted France's leaders to understand that the Nazi regime was not just another authoritarian government, like so many others that had come to power in Europe during the 1920s and 1930s: it was something more terrifying. The League's leaders believed that Hitler's diplomatic gestures concealed a sinister agenda directed against Jews and other minorities. Mein Kampf, translated in full, could expose the truth about Hitler's plans for Germany and for Europe. In order to spread the message as widely as possible, the League bought thousands of copies of Sorlot's translation. It sent them to France's politicians, union leaders, ministers, priests, generals and scholars.

The left-wing activists of the League, horrified by Hitler's anti-semitism, made common cause with the notoriously anti-semitic French far-right.The strange partnership took a stranger twist as the Nazi regime tried to stifle Sorlot's translation. Determined to prevent the truth about his dreams of a defeated France and a 'racially pure' Germany from being known, Hitler launched a lawsuit against Sorlot in a French court. He argued that Sorlot—who had not asked permission for his French translation—had violated his rights as an author.

The League, along with much of the French left, was initially thrilled at the opportunity: if Hitler was suing Sorlot, then the Nazi leader could be brought before the court to testify. Once in court, facing questioning, Hitler could be forced to expose the true extent of his racist, anti-Semitic and anti-French hatreds. But the court excused Hitler from appearing, and found that his rights had indeed been violated. It ordered Sorlot to halt publication of his French translation. In defiance of the law, the League secretly kept a thousand copies. Over the next few years, it distributed them to key allies in French politics and media, making sure that at least some members of the public knew the danger that lay ahead.

The alliance between the League and Sorlot was short lived. Like Maurras and many other far-right leaders, Sorlot collaborated with the Nazi regime that occupied France from 1940 to 1944, while the League's members went underground to continue the fight against Hitler by other means. But if the League lost the battle in court and saw its former partners turn against it, it had nevertheless found a weak point in the Nazi regime. By threatening to expose his beliefs and his agenda to the world, it had made Hitler afraid. Giving Nazis a platform to speak was a way to fight the rise of Nazism.