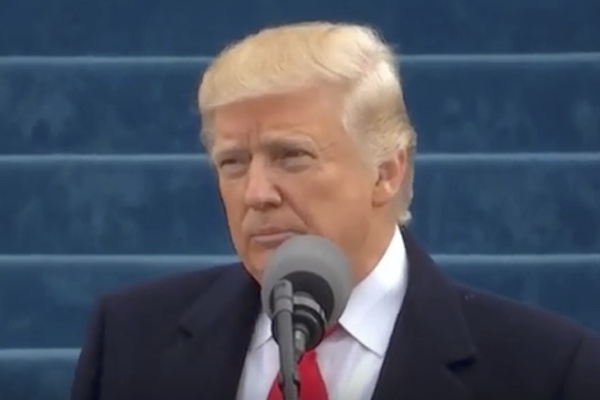 It is not generally well-known that four Republican Presidents elected since 1928 “flirted” with the Democratic Party before becoming Republicans. The same cannot be said about Democratic Presidents.

It could be argued that the Republican Party has faced a constant conflict within its establishment, as either moderates have felt aggrieved as occurred in 1980 with Ronald Reagan’s election, or the conservatives saw themselves as being mistreated, as with the victories of Herbert Hoover in 1928 and Dwight D. Eisenhower in 1952. Now the triumph of Donald Trump has cheated both the moderates and many conservatives of control of the party’s future, but with growing opposition emerging against the 45th President.

Donald Trump’s career as a real estate mogul, television personality, and reality star on The Apprentice made him a notable public figure. He had a history of being a registered Democrat until he was past 40, and then a Republican until 1999, then becoming an independent and considering a Presidential run on the Reform Party line in 2000. Trump then rejoined the Democratic Party in 2001 and remained a member until Senator John McCain ran for President against Barack Obama 2008. He reverted to the independent line in 2011-2012, then went back to the Republicans, and began his assault on the Republican Party establishment with his announcement of a Presidential campaign in June 2015. He had, meanwhile, promoted the “Birther” theory against Barack Obama, but maintained strong relations with many Democrats, including Bill and Hillary Clinton, Nancy Pelosi, and Chuck Schumer. He even made donations to Democrats.

His loyalty to the Republican Party and its principles has always been based on how it affected his own ambitions, and he has proved to be a nightmare to the Republican Party establishment. He has repudiated standard GOP ideas. He has utilized character assassination against the Republicans who opposed him during the primaries. He has assailed GOP officeholders who got in his way, including House Speaker Paul Ryan, and most recently, Senate Majority Leader Mitch McConnell. Trump has made clear he is an independent in every sense of the word, and the Republican Party now realizes it has become the captive of a man who isn’t much of a conservative and not really a Republican. His presidency is destroying the whole concept of what a Republican is in 2017, as the extreme right, the Alt Right of Stephen Bannon and Stephen Miller, seems to be in the ascendancy. Although the top military leaders in the government---White House Chief of Staff John Kelly, National Security Adviser H. R. McMaster, and Secretary of Defense James Mattis—are attempting to keep the dangerous, unstable Donald Trump from extreme actions, they have been unable to stop his reckless use of Twitter to attack our allies and cozy up to our enemies.

The first Republican President to have a Democratic Party link was Herbert Hoover, who never engaged in government or politics until he was 40, and had not registered within either major political party. At the outbreak of World War I, he served as an aide to Democratic President Woodrow Wilson, organizing Belgian food relief. Wilson made him head of the US Food Administration from August 1917 to November 1918. Later he became the leader of the American Relief Administration, which provided assistance to central and eastern Europe after the war ended. He also expressed support for Wilson’s Treaty of Versailles and the League of Nations. Franklin D. Roosevelt, the Assistant Secretary of the Navy, and a close friend of Hoover’s, suggested publicly that Hoover should be considered for the Democratic Presidential nomination in 1920 in recognition of his humanitarian efforts and efficient administrative leadership. But Wilson’s “honeymoon” with Hoover ended when he came out in support of the GOP’s proposed revisions to the Versailles Treaty, causing a break with the President.

Hoover indicated that he was available for the Republican Presidential nomination, but declined to campaign for it. After Warren G. Harding’s victory Hoover agreed to take the cabinet position of Secretary of Commerce. He performed well, but never won the friendship of Calvin Coolidge, who succeeded Harding in the presidency. Hoover was elected President in 1928 but his independent streak alienated many Democrats and Republicans. After the Great Depression began, Democrats attacked him ferociously (including FDR, his erstwhile friend), and Republicans began abandoning him.

Dwight D. Eisenhower had spent his career in the US Army, and was given the responsibility in World War II to invade North Africa (Operation Torch); then Sicily and Italy (Operation Avalanche). Eventually he was named Supreme Allied Commander of the invasion of Europe at Normandy, France, known as D-Day (Operation Overlord). After the war, Eisenhower served as Military Governor in Germany, and then as Army Chief of Staff. Eisenhower also served as NATO Supreme Commander.

All of these appointments involved interactions with Democratic Presidents Franklin D. Roosevelt and Harry Truman. As Eisenhower gained hero status, pundits began speculating that he might become involved in politics. But Eisenhower rejected engagement in Presidential politics, even when Truman suggested it as early as the Potsdam Conference in Germany in late July-early August 1945, within months of Truman becoming President upon the death of FDR. In 1947, Truman went so far as to suggest that he was willing to run for Vice President if Ike agreed to run as the head of the ticket on the Democratic line in 1948. Again, in 1951, Truman pushed the idea of Eisenhower running as a Democrat for the Presidency, this time in 1952, but the war hero now made clear that he had substantial disagreements with the Democratic Party platform. This led to a break with Truman.

But neither was Ike entirely comfortable with the GOP. He opposed isolationism in the party, and challenged Robert Taft, Mr. Republican, for the Republican nomination in 1952. So the independent Ike, who had never registered as a member of a political party, formally became a Republican. Once President, he found it wise to work with and cooperate much of the time with the Democratic Party leadership of Speaker of the House Sam Rayburn and Senate Majority Leader Lyndon B. Johnson, since the Democrats controlled both houses of Congress from 1955-1961. The Old Guard in the GOP never fully accepted Eisenhower, who refused to wage war on the New Deal, as a “true” Republican.

Ronald Reagan had been a loyal New Deal Democrat, a great advocate for Franklin D. Roosevelt, and strong supporter of Harry Truman. He was proud to call himself a liberal. But his views began changing after his divorce from actress Jane Wyman in 1948 and his marriage to Nancy Davis, whose father was a strong conservative Republican. There are many reasons for Reagan’s switch, perhaps including the steep taxes he was forced to pay as a well-paid actor. He cemented his position as a conservative in the 1950s when he started working as a spokesman for General Electric, giving speeches to company employees about the merits of the free enterprise system. As the decade wore on, he became the host of General Electric Theater, which earned him a national following.

Southern California businessmen convinced Reagan to run for Governor of California in 1966, after a well received campaign speech for conservative Senator Barry Goldwater in the 1964 Presidential campaign. Reagan defeated popular Democratic Governor Edmund G. (Pat) Brown soundly. Such began his future quest for the Presidency, with wife Nancy encouraging him all the way. But when President, he realized the importance of keeping in touch with Democrats, including House Speaker Thomas “Tip” O’Neill, in order to make it possible to accomplish his goals, since the Democrats controlled the House of Representatives throughout the 1980s. Many moderate Republicans never fully accepted him, preferring Vice President George H. W. Bush, who was named to the ticket to mollify them. When Bush in turn became President, many conservatives felt estranged. After Bush signed on to a major tax increase in 1990, repudiating his Read My Lips No New Taxes pledge, hardliners in the party broke with Bush. This helped to lead to his defeat for reelection in 1992.

What this brief review of history shows is that intraparty splits have always been a problem for the Republican Party, even going back earlier to Theodore Roosevelt and William Howard Taft. It is clear from examining the careers of Hoover, Eisenhower, Reagan, the elder Bush, and Trump that the Republican Party has a history of conflicting loyalties. This has created party instability and raised questions about the party’s true agenda. Who owns the GOP brand? It used to be progressives, and later liberals against mainstream conservatives. But starting in the 1980s under Reagan, the liberal wing disappeared, and the party became more right wing, causing grief for the elder Bush.

Rightwing conservatives, among them evangelicals and Alt-Right Breitbart extremists, now dominate the Republican Party. Due to gerrymandering, the makeup of the US Senate, and the Electoral College with its flaws, we face a future in which a major political party might become so right wing and out of the mainstream as to set America back in many ways to the 19th century Gilded Age. This would mean the decline and fall of the American nation.

So Donald Trump has created by his victory a national and international crisis without any clue as to how much damage he will do, and his own narcissism and egotism could bring the downfall of the American Republic as we know it, as it now seems that Trump may repudiate the party line he ran on in 2016, and use his base to wield unconstitutional executive authority. (Often he seems to be running against the party leaders in Congress, Paul Ryan and Mitch McConnell.) So this is a time for concern and action to remove him from office as soon as possible for the good of the nation -- as many Republicans and conservatives are coming to realize.