Trump’s Failing Use of the Bully Pulpit

David McLennan is a Professor of Political Science at Meredith College. 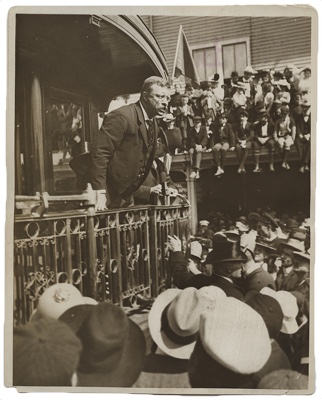 The Republican promise to repeal the Affordable Care Act (ACA) continues to be a problem, despite its members controlling the executive and legislative branches. After having many motions go down to defeat including the “skinny repeal,” Republicans face an uncertain future on health care.  Recent polls show that the ACA is the most popular it has been and various versions of House and Senate replacement bills languish with less than one-quarter of Americans approving any version of a replacement.

Although health care reform is difficult because of intra-party differences among Republicans, President Trump’s unwillingness or inability to perform one of the most basic tasks of presidential leadership—using the bully pulpit—makes Republican legislative victories in the future unlikely.

Just over six months into his presidency, Donald Trump has shown little inclination to use traditional methods of presidential persuasion to sell his policy ideas, instead relying on Twitter threats and small group meetings with legislators to push for policies like the Better Care Reconciliation Act (BCRA). In comparison, President Barack Obama gave a televised speech to a joint session of Congress on September 9, 2009, along with many other speeches and national interviews before the ACA passed in 2010.

From Barack Obama’s speeches on health care reform or human rights and even as far back as Theodore Roosevelt’s speeches on behalf of the Panama Canal, the policy speech and full-blown communication campaign have been critical for major policy initiatives to be successful.

Called the “rise of the rhetorical presidency” by political scientists such as Jeffrey Tullis, this type of presidential persuasion aims to shape public opinion rather than convince legislators directly.  The messages themselves changed from ones based on formal logic and argumentation to more of a narrative structured message filled with emotional appeals.

Historically, there have been many examples of successful policy campaigns by modern presidents. Ronald Reagan was masterful at employing the rhetorical tools of the modern presidency by weaving stories rich in American mythology with reasons often lacking rational proof. His Strategic Defense Initiative, or Star Wars, speech was typical of this approach as he wrapped the story of America’s fundamental goodness with claims about military hardware systems that were unproven. President George W. Bush campaigned to use military intervention in Iraq and remove Saddam Hussein using a similar narrative logic meant to move public opinion, even if the opinion of many military and foreign policy experts did not support Bush’s position.

Likewise, Barack Obama’s campaign for the Affordable Care Act was a full blown public campaign of speeches and media appearances in which the messages about health care reform were framed as part of a longstanding attempt by presidents from Theodore Roosevelt to the present to make health care accessible and affordable to all Americans. He argued that the plan would protect the free market for health insurance and bring down the costs of care, promises that later proved problematic.

Policy speeches and public campaigns are no guarantee of success. Woodrow Wilson’s League of Nations campaign in 1919 was a dismal failure. After a grueling year of speeches and appearances across the nation by Wilson, the Senate failed to ratify the treaty authorizing U.S. participation in the League. Likewise, Bill Clinton’s campaign for health care reform in 1993 failed, not because of a lack of effort on Clinton’s part, but in part because his administration’s rhetoric about the need for and promise of health care reform was met by a more powerful narrative in the “Harry and Louise” ads produced by the health care industry.

Instead of making a major nationally televised policy speech advocating a clear health care reform bill or traveling the country sharing stories of how a new law will change lives, Trump prefers exhortation. He promises great health care for everyone and criticizes the ACA for being a disaster. This is not persuasion that will help Republicans get health care reform across the finish line.

Presidential persuasion, as demonstrated by many of his predecessors, still matters, but as President Trump has illustrated with many other White House traditions, the policy speech may be a thing of the past.