Review of Nancy MacLean’s “Democracy in Chains: The Deep History of the Radical Right’s Stealth Plan for America” 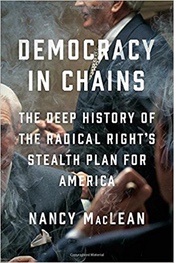 With Democracy in Chains, Nancy MacLean, William H. Chafe Professor of History and Public Policy at Duke University, enters the thicket of political controversy that characterizes academic as well as civil discourse in contemporary American life. One’s reaction to MacLean’s scholarship will be greatly influenced by the reader’s predilections, and Democracy in Chains has already been denounced by academics who identify with a libertarian political perspective. Essentially, MacLean argues that the institutions of American democracy are under assault by a radical libertarian minority who combine the philosophical writings of Nobel Prize-winning economist James McGill Buchanan with the financial resources of multi-billionaire Charles Koch. According to MacLean, the academics, politicians, and business interests financed by Koch are convinced that American democracy constitutes a threat to the economic liberty of the wealthy whose taxes are confiscated to support collectivist programs such as public education, Social Security, and Medicare. Thus, she concludes that the goal of the radical right is to place restrictions upon the implementation of democracy and majority rule.

Much of MacLean’s primary research is based upon the papers of Buchanan which she discovered at George Mason University. MacLean confesses that like most Americans she was largely unaware of Buchanan’s work and influence until she began her research on opposition to school desegregation in Virginia following the 1954 Brown v. Board of Education Supreme Court decision. In response to the court ruling, Buchanan, who served as chair of the Economics Department at the University of Virginia, convinced university president Colgate Whitehead Darden Jr. to support the establishment of the Thomas Jefferson Center, a foundation based upon corporate support that would provide a philosophical underpinning to the state’s resistance to the forced integration of Virginia’s schools. In his defense of segregation, Buchanan did not rely upon racist arguments, choosing to frame the issue within the context of individual liberty. Thus, Buchanan embraced the decision of the Henry Byrd political machine to close the state’s public schools, a move that reflected Buchanan’s philosophical objections to public schools as an unwarranted government intrusion and threat to economic liberty. According to Buchanan, the only legitimate objectives of government were providing for the common defense and maintaining order.

MacLean asserts that Buchanan drew inspiration from the writings of John C. Calhoun, whom Richard Hofstadter dubbed the “Marx of the master class.” Calhoun perceived the federal government as a threat to the institution of slavery, and, thus, the powers of the non-slaveholding majority had to be checked in order to preserve the economic and social benefits of slavery. As MacLean notes, Calhoun was inconsistent in the application of his principles, supporting the expansion of government censorship to limit criticism of slavery—an inconsistency often exhibited by contemporary champions of public order.

Crucial to Buchanan’s thought is the concept of public choice. Majority rule is suspect as it leads to ever expanding government intervention. Once a government program is introduced, it is virtually impossible to terminate the benefits bestowed upon its constituents, as they will collectively elect politicians to secure and expand programs and benefits. Thus to protect capitalism and the liberty of wealthy individuals, it is imperative that government must be limited so that the majority will not be able to tyrannize the minority. Buchanan, however, had little opportunity to personally implement these ideas within the United States. Despite earning the support of wealthy benefactors, he tended to remain a political outsider. Born into a relatively modest Tennessee family, Buchanan’s limited fortunes made it impossible for him to attend Vanderbilt University. After gaining a degree at Middle Tennessee State University, Buchanan did his graduate work at the conservative University of Chicago, but Buchanan always retained a bias against what he considered the elites in American society. His writings, nevertheless, earned the backing of wealthy elites, but personal disagreements led the professor to move from the University of Virginia to other institutions before eventually finding a home at George Mason University. MacLean concludes that while Koch and Buchanan forged an influential alliance, it was Koch who increasingly called the shots for the radical libertarian movement that Buchanan helped to create.

While Buchanan’s influence on American politics was primarily philosophical, his most direct involvement with governmental activity is rather disturbing. MacLean devotes a chapter to Buchanan’s work as an adviser to the Augusto Pinochet regime following the bloody military coup in Chile. Buchanan’s job was to help the Pinochet government devise a new constitution that would place “a lock and bolt” upon majority democratic rule and make it difficult to alter the protections for capitalism enacted by the Pinochet regime. Although MacLean concedes that Buchanan was reluctant to discuss his work in Chile, she suggests that the Chilean experience could be a foreshadowing of America’s future if the Koch-Buchanan agenda is realized within the United States.

The last part of MacLean’s book focuses upon more recent efforts by Charles Koch to implement the ideas of Buchanan, who died in 2013. Here, MacLean lacks some of the primary documentation she provides for Buchanan’s life and work, relying upon the research of journalists such as Jane Mayer who follows the money influencing contemporary politics. MacLean asserts that employing stealth methods, the radical libertarian right seeks “Calhoun-style liberty for the few—the liberty to concentrate vast wealth, so as to deny elementary fairness and freedom to the many” (234). However, she does not quite explain how Donald Trump fits into this equation. The enigmatic and authoritarian Trump seems to capture the Buchanan vision by dismantling regulations, including environmental and climate controls, that seek to provide democratic checks upon corporations, while, on the other hand, he at least maintains rhetorical support for government programs such as Medicare, Social Security, and increased spending on infrastructure. In addition, MacLean devotes little attention to the all too often ignored efforts at the state level to convene a new constitutional convention that would provide an opportunity to draft a new governmental structure that would restrict majority rule even more than the current system of checks and balances complemented by institutions such as the Electoral College and Senate.

In introducing readers to the ideas of Buchanan, MacLean makes a contribution to our understanding of contemporary political discourse. MacLean’s conclusions are and will be denounced in many quarters, but she makes a strong case for the threat posed by the radical libertarian right to democracy’s ability to address inequities in American society. She has been criticized for accepting government funds to support her research, and in the interest of transparency this reviewer would like to point out that in retirement he is a proud and grateful recipient of Social Security and Medicare benefits.