This Is What Happened in an Earlier Brexit

Wen-Qing Ngoei is a postdoctoral fellow in the Brady-Johnson Grand Strategy Program at Yale University and an Assistant Professor of History at the Nanyang Technological University in Singapore. This essay is adapted from material in his book, "The Arc of Containment: Britain, Malaya, Singapore and the Rise of American Hegemony in Southeast Asia, 1941-1976" (Cornell University Press, forthcoming 2019) and his recent article in Diplomatic History. 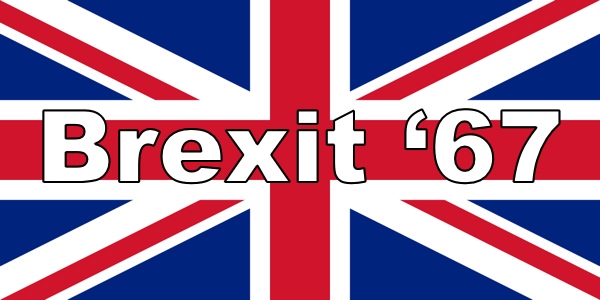 The past is littered with Brexits. Indeed, episodes of Great Britain’s retreat from its empire multiplied after 1945. Repeatedly, and across the world, Britain’s retrenchment distressed its allies while encouraging other powers to ponder filling the vacuums Britain left behind.

The tremors in the international order produced by last June’s UK referendum vote to leave the European Union resemble, but do not transcend, those of Brexits past. One Brexit initiated fifty years ago this month was arguably more consequential. On July 18, 1967, London announced its plans to withdraw from its military bases in Singapore by the mid-1970s. For an empire on its last legs, Britain’s annual $200 million bill for maintaining Singapore’s vast air and naval complexes was too expensive. Thus, the 30,000 British troops stationed in Singapore, a deployment second in size to only Britain’s NATO commitments, would head home. With this, Britain’s military presence to the “East of Suez” would shrink drastically, ending its role as a great power beyond the European theater.

London’s decision disappointed its allies in Southeast Asia; the Malaysians and Singaporeans who relied almost entirely on British security guarantees; the Americans then warring in Vietnam. This disappointment deepened six months later when Britain accelerated its scheduled military exit from Singapore to 1971, and declared it would also leave its outposts in the Persian Gulf. As historian William Roger Louis has noted, the British public fully appreciated the significance of this development; one British newspaper compared it to the Empire’s withdrawal from India and Africa. U.S. Secretary of State Dean Rusk, upon learning of these plans from UK Foreign Secretary George Brown, reportedly growled at him: “For God’s sake, act like Britain!” In turn, President Lyndon Johnson wrote British Prime Minister Harold Wilson, dismayed that in Asia, the U.S. must now “man the ramparts all alone.”

The mood in the Kremlin was different. Russian aid to Hanoi had stymied U.S. forces in Vietnam. As both the U.S. and Britain fashioned exit strategies from Southeast Asia, the Soviets hoped to enlarge their regional influence outside of Indochina. Moscow believed that the West-friendly governments of ASEAN (Association of Southeast Asian Nations) would surely seek big power protection against potential Chinese expansionism as their Anglo-American patrons retreated. Russian leaders, game to fill the power vacuum and counter China’s influence over most of Southeast Asia’s communist parties, proposed to ASEAN leaders a Soviet-led collective security framework for the region.

Thereafter, Brexit ’67 unfolded quite contrary to the run of play in Southeast Asia, offering the USSR no edge over its Cold War rivals in the region. And this despite the fact that Britain mustered little effort to discourage Soviet ambitions. Indeed, Britain had cajoled Malaysia, Singapore, Australia and New Zealand into inking the Five Power Defense Arrangement (FPDA), a poor substitute for Britain’s military umbrella. For, Britain had once been obligated to protect Malaysia and Singapore under the Anglo-Malaysian Defense Agreement (AMDA), but the FPDA that replaced AMDA contained only British promises to deploy its military to Southeast Asia from bases in the Gulf and the Indian Ocean.

U.S. officials judged that from such a distance, Britain’s impact on Southeast Asian affairs would be severely diminished. The FPDA did not bind Australia or New Zealand to defend Malaysia and Singapore either, requiring only that the allies consult each other on how to respond should the two ASEAN states face external threats. Worse still, the FPDA members agreed to conduct a joint military exercise without Britain in 1970 (codenamed “Bersatu Padu,” Malay for “Complete Unity”) to test their capabilities, a move likely to expose their strategic inadequacies without British armed forces.

Then came unexpected turns. In mid-1970 the Conservatives swept to power in the UK and, to reinforce Britain’s ties to Australia and New Zealand, injected the British military into Bersatu Padu. The exercise suddenly swelled to involve fifty warships, 200 aircraft and 25,000 military personnel, more than half of which were British forces, deployed in less than a day to Malaysia from some 8,000 miles away.

Britain’s largest peacetime airlift stunned Soviet officials. Furthermore, they had recently been frustrated by ASEAN leaders’ cool reception of the Soviet collective security proposal. Indonesia leaned resolutely toward America; the Philippines only established relations with the Soviet Union in 1976; Thailand continued to host U.S. troops and bases. As such, the magnitude of Bersatu Padu persuaded the Kremlin that Malaysia and Singapore were also off limits. In frustration, Russian news organs issued repetitive and ineffectual denunciations of the FPDA during and after Bersatu Padu. Among other things, the Soviets called FPDA a “blood relative” of NATO, insisting it enabled British military power to remain in Southeast Asia to support “imperialist” America. For a year following the exercise, the USSR continued to lambaste the FPDA.

Such official statements, as they proliferated, read like the USSR was overcompensating, betraying a bitter acknowledgment of its limited capacity to compete against America and China for influence in the broader Southeast Asian region. And months before the FPDA officially came into force in November 1971, before America had even executed rapprochement with China, Moscow was determined to pursue détente with Washington. The surprising twists accompanying Brexit ’67 influenced the Soviets’ decision to accommodate to U.S. predominance in Asia.

We may be tempted to use Brexit ’67 to divine the future of contemporary UK-EU relations, forecast Russia’s maneuvers, and imagine the Trump administration’s range of reactions. The punditocracy will recruit suitable interpretations of the past—comforting or unsettling—to rhetorically assert control over the unpredictable present. But the study of the past reminds us that contingency rules the day. And though it seems trite to conclude that Brexit ’67 recommends we “expect the unexpected,” this banal phrase holds a deeper truth. Declining Britain nevertheless frustrated the Russians; U.S. failures in Vietnam presented no great advantage to the Soviets in Southeast Asia. Great powers can hold such sway over world affairs yet never truly control their fates.