Now We Know What the State Department Was Hiding

Ervand Abrahamian is emeritus Professor of History at Baruch College and the CUNY Graduate Center. 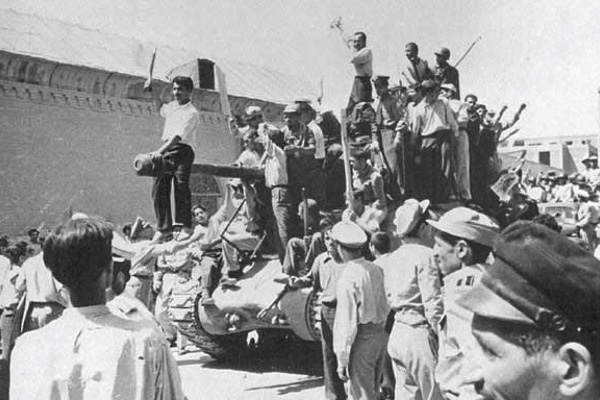 Related Link Why has the history of Iran's left been erased? An interview with Ervand Abrahamian.

The State Department has finally released a much-awaited volume of internal documents from 1951 to 1954, the period during which Mohammad Mossadeq was prime minister of Iran. The department is obliged to publish 30-year-old documents in its annual series entitled Foreign Relations of the United States (FRUS). The original volume for the Mossadeq period, published in 1989, was so skimpy—with long gaps of any communications between the embassy in Tehran and the department in Washington, especially during heightened crises—that many academics, including the American Historical Association, lodged official complaints.

In 1991, the State Department, under congressional pressure, promised to issue a new version of the volume. This was delayed at first because the clearance was needed from a “third party” (UK) mentioned in some documents, and then because the US did not want to “jeopardize” the on-going nuclear negotiations with Iran. The present volume, billed as a “retrospective,” contains 375 documents totaling 970 pages. It includes not only embassy communications but also the minutes of the meetings of the National Security Council and the CIA on discussions of Iran.

Although many scholars of Iran anticipated new revelations about the actual overthrow of Mossadeq in August 1953, few expected such information. Even unclassified documents omit details on “operations,” especially on agents, informants, money transactions, and taboo activities. Moreover, we already knew much of what is worth knowing about that actual coup from the well-known “Wilber document.”

Donald Wilber, a CIA academic in charge of the “psychological warfare” side of the venture, had been assigned in 1954 to compile a detailed internal report. This report, entitled “Overthrow of Premier Mossadeq of Iran,” is a genuine primary source. It was designed as an eyes-only handbook for future coups. It was by no means intended to enhance the agency’s public image—as some royalists in Iran like to claim. It was leaked in 2000 through The New York Times and received much coverage through the Internet, numerous book reprints, and translations in Iran. The only significant segment missing from the leaked version was an appendix listing the Iranian politicians, journalists, newspaper editors, clergymen, senators, and parliamentary deputies on the CIA payroll. Not surprisingly, this annex does not appear in the “retrospective.” In fact, the Wilber report does not appear at all—probably because of the references to the UK.

The new volume may not reveal much new about the actual coup, but it does provide a vast amount of information on US involvement in Iran. It is a goldmine of astounding information—especially on three important arenas.

First, it reveals how deeply the US—not just the CIA but also the US embassy headed by Ambassador Loy Henderson—was immersed in the nitty-gritty of internal day-to-day Iranian politics. Every so often Henderson would pronounce with a straight face that the US had the principled policy of never interfering in another country’s internal politics. Then he would plunge in without batting an eye.

He consistently encouraged the shah to get rid of Mossadeq—this pressure started soon after Mossadeq was elected prime minister. He vetted a list of some 18 candidates to replace Mossadeq. He helped engineer Mossadeq’s brief replacement by Qavam in July 1952—this sparked the 30th Tir (July 20) Uprising. He decisively intervened in early 1953 to prevent the shah from leaving the country—triggering what became known as the 8th Esfand (February 28) Crisis when thugs tried to break into Mossadeq’s home. The shah later thanked Henderson for having saved the monarchy on that fateful day. Henderson also did his very best to drive a wedge between Mossadeq and Ayatollah Kashani, the main cleric involved in national politics. He buttered up the latter as a font of religious wisdom worthy of being a leader of not just Iran but of the whole Islamic world. This meddling in internal politics may well explain why the State Department was so reluctant to release these embassy dispatches.

At the same time the embassy was active through the CIA in a whole array of ventures long before the climactic coup. It vetted candidates for parliament—the CIA congratulated itself for its “great success” in the 1952 parliamentary elections. It recruited journalists, clerics, and politicians. It experimented with outside-the-box ideas such as creating a “Titoist Party.” It encouraged the Fedayyan-e Islam, a small gang of religious fanatics, to take “direct action” against government supporters. It waged constant “psychological warfare” that included hiring goons to beat up demonstrators and newspaper sellers as well as resorting to “poison pens, personal denunciations, and rumor mongering.” These activities were all categorized as “moral sabotage.”

Second, the new documents show categorically that the idea of a coup was not something cooked up by John Foster Dulles, the new secretary of state, only after Eisenhower had entered the White House in January 1953. During the previous two years, under the Truman administration, both Allen Dulles and Kermit Roosevelt had been well ensconced within the CIA directorate obsessing about Iran and advocating policies similar to the British—i.e. the removal of Mossadeq. The documents reveal a continual tug-of-war between the two and more cautious members of the National Security Council.

The back-and-forth focused on the National Intelligence Estimate (NIE) for Iran. The original 1952 estimate had been fairly down-to-earth, concluding that the Mossadeq administration had durability and the communist party was in no position to muster a challenge. Dulles and Roosevelt, in sharp contrast, constantly pushed for a revised NIE that would include alarm bells on how the “mentally unstable” Mossadeq was on his last legs, and how the communist party was on the verge of taking power—in short, the sky was about to fall unless the CIA took direct action.

The Issue of Oil

Finally, the volume challenges the conventional view that the coup had little to do with oil but much to do with the Cold War. The CIA’s internal instruction stressed that agents should make “every effort to de-emphasize the oil issue.” The NSC agreed only two weeks after the oil was nationalized that “we can not be neutral in the dispute and must give vigorous support to Britain…Iran has broken contract, set a bad precedent for other countries such as Iraq, and has created a contagious situation which we should do all in our power to check.” Eisenhower, who liked to keep distant from sordid details, declared categorically in rare interventions at cabinet meetings that “We have to respect the enormous investments the British have made in Iran, and their proposals have been wholly reasonable. We don’t want to break with the British” and “The example [of successful nationalization] might have grave effects on US oil concession in other parts of the world.”

These British proposals mentioned by Eisenhower—endorsed by the US and the World Bank and, according to conventional wisdom, rejected by Iran—would have left the issue of compensation to international arbitration. In fact, Mossadeq never rejected these final proposals. Instead he requested clarification that compensation would be based on the current value of the oil installations, not on imagined profits projected to the end of the century. He suspected—documents reinforced his suspicions—that the British wanted such an “astronomical sum” that Iran would have been reduced to state of “bondage” for decades to come. This would have acted as a lethal deterrence for any other country tempted with the notion of oil nationalization. A confidential UK message to the US stated: “The overriding consideration of compensation must be such as not to provide a reward for the tearing up of contractual obligations or to disturb the pattern of world oil prices.”

Secretary Dulles, in his final message to Mossadeq, was quite blunt: “There is considerable sentiment in the US to the effect that a settlement based on the payment of compensation merely for losses of the physical assets which have been nationalized would not be a reasonable and such an agreement might tend to weaken mutual trust between nations engaged in friendly economic intercourse.“ Once Mossadeq was removed, the new National Intelligence Estimate stipulated: “Settlement must not establish a precedent adversely affecting established oil industry in a way inimical to US interests.” Although many insist the coup had nothing to do with petroleum, the 375 documents end with a grand finale summarizing the 1954 Oil Consortium Agreement. This agreement in effect de-nationalized the industry and handed control over to the major Western oil companies.

The terms “alternative facts,” “deep states,” and “electoral collusion” may not have been in circulation back in 1951-54. But the concepts were very much present in the US tool kit. Anyone interested in the workings of imperialism in a semi-colonial state would learn much wading through this morass of badly written and turgid double-speak.