America in Crisis: Our Grotesque Predicament 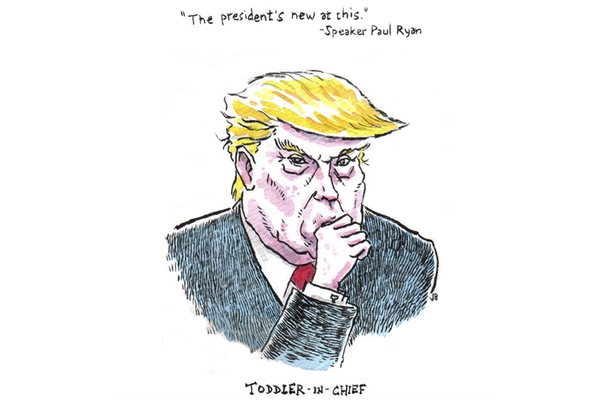 First in a series: America in Crisis

We are currently passing through an ugly crisis in our history, one of the ugliest in recent times. At the center of this crisis is a president who acts like a bratty child, who delights in rubbing salt in the wounds of the people he insults, who blurts out anything that comes into his head, who makes accusations without a shred of evidence — let alone proof — and who ridicules any who dare to question his words and deeds.

In an obvious sense, the root cause of our political crisis is Donald Trump. This crude and delusional man is despoiling some of our most treasured national assets, not least of all our standing in the world.

But there are deeper forces at work in this crisis: divisions among our people that are becoming almost tribal; the degradation of our political culture by the coarsening of public discourse; and deep structural flaws in our democratic process, for the fact cannot be evaded: Trump lost the popular vote. A majority of American voters did not want this situation to occur. And they do not want the corrosive policies that Trump and his minions are currently forcing upon them. Small wonder that people around the world are asking each other what could possibly have gone so very wrong with America. Small wonder that many of us are asking the very same question. This series will attempt to put our plight in historical perspective.

There are precedents for certain aspects of this crisis. Take the presidential issue: disastrous presidents have come and gone, but our nation survived their gross behavior. Warren Harding, for instance, was vulgar and his cronies perpetrated scandals. But he did have one redeeming feature Trump lacks: he was friendly and charming and he tried to be a healing force after years of division. Trump, on the other hand, loves to pick fights and to incite people’s anger. He may well become the most fiercely-hated president in our history.

Richard Nixon was similar to Trump in a number of ways, for he too was a man who sowed division, who trafficked in the politics of anger, who degraded the presidential office. But Nixon — at least until the very last weeks of the Watergate affair, when he was sometimes out of control — maintained a fair semblance of cool self-possession in public, even as he brooded and festered in private. Trump, on the other hand, is nothing less than a wild man, a berserker. And he is now entrusted with the nuclear codes that could eradicate our world.

There are also historical precedents for the divisions that are making our “blue state” voters and “red state” voters despise one another from the very depths of their souls. Those who believe we are dividing into the cultural equivalent of “two nations” are ruminating nowadays — if only in a half-facetious way — about our drift toward a state of civil war. And there are genuine reasons for alarm. The California secession campaign is quite serious, and so is the Republican counter-campaign that would split California in two. Both of these initiatives are being pursued through petitions that would lead to referendums.

The hatred that is poisoning our public life almost seethes with incipient violence. Fighting indeed broke out in a number of cities right after Trump’s election and additional violence occurred on Inauguration Day.  Then a shooter opened fire on a group of Republican congressmen in Virginia.  We know that our political disputes have led to violence before, and there are plenty of people right now who can vividly recall that in the 1960s — a century after our first Civil War — the great polarization in American life led to serious and sometimes lethal violence. Violence also erupted in the final year of Herbert Hoover’s presidency, when economic conditions led to protests in many parts of the country, including the Nation’s Capital. And economic grievances resulting from the lingering effects of our recent Great Recession played a role in the election of Trump.

Some of the most interesting divisions in our politics have occurred in the Republican Party, which is now more than ever in the hands of the radical right. But Republican moderates — one has to observe that there are very few Republican liberals anymore — are appalled by the Trump phenomenon. John McCain, a previous Republican presidential nominee, is perhaps the most prominent example of Republicans who are alienated from their party’s current leadership, and even former president George W. Bush, whose adviser Karl Rove strove to worsen our ideological divisions in many respects, has proclaimed himself to be distressed, sick at heart, as he beholds the spectacle America is making of itself. Even outright conservatives such as the pundit George F. Will are finding the Republican situation under Trump to be morally intolerable. Both of our parties have been fraught with divisions before, but the ongoing crisis for Republicans — with the advent of extremists such as Steve Bannon in the Trump entourage — hearkens back to election year 1964 when the extremist politics of Barry Goldwater fractured the Republican Party.

Current anger at the Electoral College, which overturned the popular vote for Hillary Clinton, is not entirely unprecedented, for the system has served the United States badly on a number of occasions, most spectacularly in the contested election of 1876, which had to be settled through creation by Congress of an electoral commission to arbitrate disputed returns. In the election of 2000, the popular vote was overturned by the Electoral College amid another controversy regarding contested returns, a controversy mooted by a peremptory and (in the view of some) blatantly partisan decision by our packed Supreme Court. But whatever the strengths of our constitutional heritage — strengths such as the system of checks and balances whereby Congress has some power to blunt the worst excesses of Trump — the undeniable fact is that our current situation has arisen due to flaws in the evolution of our constitutional system. For example, the Electoral College is not working as the Founding Fathers intended. The winner-take-all procedure for allocating Electoral votes, which most states have adopted, has no basis whatsoever in the text of the Constitution. And this pernicious system can nullify millions of votes if a candidate carries a state by a razor-thin margin

Other weaknesses in our system are manifest if we compare it to the workings of parliamentary systems through which “snap elections” can occur if the electorate changes its mind. But in America we have to wait four long years in order to correct a bad choice in a presidential election unless the incumbent can somehow be removed through the slow and excruciating process of impeachment.

This series will explore such issues through a sequence of thematic articles that will analyze our current plight and its causes — one by one. The series will conclude with some bold speculation in regard to the best-case futures and the worst-case futures that are looming just over the horizon.