One Promising Reason Theresa May Lost Her Majority

Luke Reader is a lecturer in the SAGES program at Case Western Reserve University. He is currently researching internationalism and the British Labour Party. He has previously published on the BBC and Labour imperial policy. 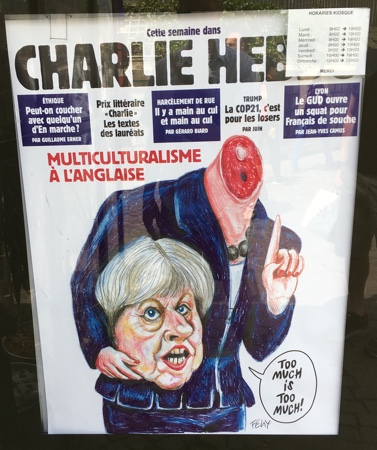 The 2017 British election is one for the history books. What does the election mean for Brexit? Will the ruthless Conservatives keep Theresa May as Prime Minister? Can Jeremy Corbyn lead the country? Is Britain governable? Is independence for Scotland receding into the mist? Can the welcome youth turnout be maintained in future elections? What does the new parliament, with record numbers of minority, LGBTQ, and women MPs, say about changing Britain?

It is not just May who has been humiliated by the election. So too have the notoriously right-wing British press, whose efforts to elect the Conservative Prime Minister failed utterly.

To understand why this occurred, we need to examine the nature of the newspaper industry in Britain.

More than a dozen daily national newspapers, along with a similar number of Sunday editions, serve the British public. Unlike their American equivalents, British newspapers often embrace partisan politics. This positioning frequently bleeds over from the op-ed pages to the news reporting.

With the exception of the Labour supporting Daily Mirror and the Guardian, and in Scotland the Labourite Daily Record and the Scottish National Party supporting National, most newspapers offer warm to fervent support for the Tories.

In 2012, researchers at the London School of Economics noted a clear correlation between newspaper reading habits and voting preference. And a recent YouGov survey showed that most British newspaper readers get their information from right-leaning sources.

During the 1980s, the Rupert Murdoch owned right-wing tabloid The Sun offered ardent support for Margaret Thatcher, reflecting the aspirational appeal – the ability to purchase council houses, for example – that her government made to some amongst the newspaper’s working-class readership. On the eve of a possible Conservative defeat to Labour in 1992, The Sun front page blared “Will the Last Person to Leave Britain Please Turn Out The Lights.” The next day, after a surprise Tory victory, the newspaper declared “It’s The Sun Wot Won It!”

Years of agitation against the EU, whether over sovereignty, human rights law, the Euro, labor directives, immigration, or even the size and shape of bananas, in newspapers like The Sun, the Daily Mail, and the Daily Telegraph put pressure on successive Conservative governments, leading to a series of splits in the 1990s. It was the desire to avoid such infighting that led David Cameron to hold the disastrous referendum on EU membership last year.

Blair’s experience was unusual. The right-wing press has traditionally viewed Labour leaders as incompetent, out-of-touch, and obsessed with taxing and spending.

This is why Labour’s strong election showing is so remarkable. The party, especially the leader Jeremy Corbyn, has spent the last two years being, in tabloid parlance, “monstered” for being far-left, soft on terror, economically incoherent, and spendthrift.

Instead, Corbyn has increased Labour’s vote share by the largest margin since 1945. By contrast, May is partnering with the Democratic Unionist Party, a regional party in Northern Ireland whose homophobia, anti-women and anti-abortion sentiments, creationism, and denial of climate science have been met with dismay, in order to remain in power.

So far, Corbyn has not been a great party leader. But as the last month has shown, he is an extraordinary campaigner. And he will probably be able to use his campaigning skills to shore up his leadership. Formerly fractious moderate Labour MPs seem much more likely to work with Corbyn in the next parliament.

It is May who now faces the ferocity of the press and potential discord from her backbenches.

So why did the newspapers fail?

One answer could be that declining newspaper readership and easy access to large numbers of media sources have decreased the influence of newspapers on voters.

Another reason is trust in the media. Certainly, the Corbyn depicted by the newspapers, and many Labour MPs, bore no resemblance to the sunny, optimistic figure presented on the campaign trail.

Another answer could also be found in the basis of Labour’s remarkable success: youth turnout.

Turnout estimates suggest around 69% of under 24s voted, compared with just 43% in 2015. 63% of voters under 35 opted for Labour, with just 27% preferring the Tories. What drove these votes? Frustration with seven years of spending cuts, economic uncertainty, anger over Brexit, and interest in Corbyn’s promise to abolish university tuition fees.

Significantly, Labour proved successful on social media, where the party outflanked the Tories and the traditional gatekeepers of the national press. In general, newspaper readership is decreasing in Britain; this is especially true of the young. As a 2014 media habits survey showed, the youngest average readership of a British newspaper was 43 for the now defunct Independent and 44 for the Guardian.

But perhaps the most telling indication of the waning authority of the largely right-wing national press came from a tweet by the former Labour Deputy Prime Minister John Prescott, who gleefully reported that Rupert Murdoch had just stomped out of The Times election party in a huff.