Virginia DeJohn Anderson, Professor of History at the University of Colorado at Boulder, is the author of The Martyr and the Traitor: Nathan Hale, Moses Dunbar, and the American Revolution; Creatures of Empire: How Domestic Animals Transformed Early America; and New England’s Generation: The Great Migration and the Formation of Society and Culture in the Seventeenth Century. 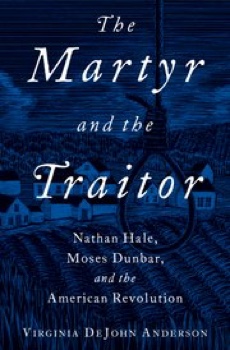 Although he was neither a prominent military figure nor a Founding Father, Nathan Hale is remembered as an American Revolutionary hero. Dozens of schools across the country bear his name. Statues of Hale dot the national landscape. There are at least seven in his native Connecticut; others can be seen in New York, Washington D.C., Chicago, St. Paul, and at the Central Intelligence Agency headquarters in Langley, Virginia. Since the mid-nineteenth century, numerous books and plays have recounted Hale’s story for audiences of all ages.

This extraordinary effort memorializes a man known not for his life but for his death—or, more precisely, for the words he spoke just before his death. On September 22, 1776, as he was about to be hanged in a British army camp in New York City, Hale reportedly declared: “I only regret, that I have but one life to lose for my country.” Hale chose his words with care, yet he could not have imagined that they would reverberate for more than two centuries in a nation that was barely two months old at the time of his execution. The condemned man had far more reason to assume that he would not be remembered at all.

Few Americans who recognize the name of Nathan Hale know that he was only 21 years old when he died. He lived the vast majority of his brief life as a British subject, not an American patriot. As a Yale College student, he strove to acquire the cultural knowledge and polite manners of an English gentleman. That endeavor, in fact, exposed him to British playwright Joseph Addison’s wildly popular drama, Cato, a passage from which Hale would paraphrase as his final statement. His untimely death came about not as a result of battlefield valor, but because of a failed spy mission that many contemporaries regarded as dishonorable.

None of these biographical facts matters, however, when it comes to commemorating Nathan Hale. Instead, his reputation as a Revolutionary martyr rests on his eloquent final words. They remind Americans of the patriotic self-sacrifice of the brave individuals who fought for the nation’s independence as well as those who, in succeeding generations, have fought with equal dedication to defend it.

Six months after Hale’s execution, another Connecticut man died in a hangman’s noose. No one remembers Moses Dunbar, however, because he supported the wrong side in the Revolution. Convicted by a civil court of treason against the state, Dunbar was executed in Hartford on March 19, 1777. Yet his story is also worth remembering for what it can tell Americans about their Revolution.

Dunbar was 30 years old when he died; unlike Hale, he left behind a wife and children. A struggling farmer, he was a reluctant loyalist, propelled toward his political allegiance in good part by the behavior of his neighbors. Years before the Revolution erupted, Dunbar joined the Church of England, an unusual but hardly unprecedented move in a colony dominated by Congregationalists. His religious affiliation perhaps strengthened his tie to the monarch who served as supreme head of the English Church, although plenty of Anglican colonists (including George Washington) readily supported the American cause. Far more influential was Dunbar’s belief that the differences between Great Britain and the colonies ought to be resolved without resort to arms and the shedding of blood. Many of his neighbors disagreed.

As political animosities intensified in 1774, local committees supporting the American cause sought to silence their opponents, often with violence. A crowd of angry men set upon Moses Dunbar, beating him so severely that he feared for his life. Other members of his Anglican congregation—presumed to back the king—were similarly targeted. Once the war began in April 1775, political polarization reached its zenith. Dunbar offered to retreat to his farm and stay neutral, but neutrality was no longer possible.

Fearing for his own safety and that of his family, Dunbar went to British-occupied New York in September 1776 to enlist in a loyalist regiment to fight on England’s behalf. While he was there, Connecticut’s legislature passed a law declaring such an act to be a capital crime. When Dunbar returned to Connecticut to fetch his wife and children to take back to New York, he was arrested. Local officials had received a tip from one of Dunbar’s neighbors, a fellow Anglican. After the trial, Dunbar’s estranged father allegedly offered to supply the rope to hang his son.

Moses Dunbar’s precise words at the gallows have not been preserved, but one eyewitness to his execution noted that he read aloud a passage from the Book of Job. Identifying with the righteous man whose faith endured, despite being tested by dreadful trials, Dunbar demonstrated that neither side in the American Revolution held a monopoly on principle. He was as fully convinced as Nathan Hale had been in the nobility of the cause for which he was about to die.

Many Americans prefer to focus on the Revolution’s winners, celebrating the republican virtues exemplified by Nathan Hale and ignoring the bitter divisions within families and communities that defined Moses Dunbar’s experience. Yet this one-sided version of events obscures the nation’s far more contentious origins and the pernicious effects of polarization. Nathan Hale and Moses Dunbar were both honorable men who followed their consciences to reach opposite conclusions about the merits of American independence. Considered together, their equally tragic stories bear witness to the moral as well as political complexities of our nation’s founding.