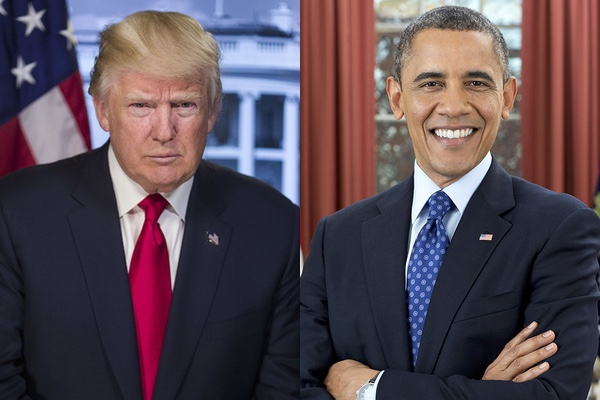 President Donald Trump despises the ground Barack Obama walks on, with Trump spending five years promoting the “Birther” theory that Obama was not born in America. And now he is continuing to claim that Obama wired Trump Tower during and after the election, an assertion with no basis, as declared by former FBI Director James Comey. Additionally, Trump has set out to destroy the Obama legacy, through executive orders, and actions by cabinet officers under his direction, as well as transforming the court system to repudiate the constructive actions of the 44th President.

How have other Presidents treated their predecessors and successors? Let’s go back to the beginning. Despite the harsh rhetoric utilized by John Adams and Thomas Jefferson in the presidential elections of 1796 and 1800, once Jefferson became President, Adams went home to Massachusetts and stayed out of political commentary. When Jefferson left office, the two Presidents resumed their earlier friendship and commenced an illuminating, and extremely significant correspondence from Massachusetts and Virginia from 1812 to 1826, resulting in a total of 158 letters, with 109 penned by Adams and 49 by Jefferson.

The first long-term war between presidents was that of John Quincy Adams and Andrew Jackson. Adams considered Jackson a “savage” in his invasion and slaughter of Native Americans in Florida in 1817. As a Massachusetts Congressman in the 1830s and 1840s, Adams condemned Jackson’s “Trail of Tears” – the forced removal of five tribes from their ancestral lands to Oklahoma. Adams also condemned Jackson’s support of slavery and the way he wielded power. (It reminded Adams of a European monarchy). Jackson, in turn, was vicious in his depiction of Adams as part of a royal family. Their antagonism and hostility continued until Jackson’s death in 1845.

Theodore Roosevelt had major conflicts with his two successors, William Howard Taft and Woodrow Wilson. TR had promoted Taft as his successor, but was sorely disappointed when Taft fired TR’s good friend, conservationist Gifford Pinchot in 1910. TR believed Taft had largely abandoned the former President’s progressive agenda. So TR chose to run against Taft in 1912. When Taft defeated TR at the Republican National Convention, TR bolted the party, forming the “Bull Moose” Progressive Party, and lambasted Taft with personal insults and bitter attacks. In the election Taft came in third – the worst showing of any incumbemnt in US history. The old camaraderie which had existed before 1908 was never the same.

TR also was furious when Woodrow Wilson was able to “hijack” his “New Nationalism” agenda after being the beneficiary of the TR-Taft split in the Republican Party. Instead of being flattered that Wilson adopted some of TR’s ideas, adding them to his own “New Freedom” agenda, TR was bitterly critical of Wilson for doing so. When the Lusitania incident occurred in 1915, TR advocated immediate war with Germany, and was apoplectic that Wilson accepted an apology and reparations. When TR visited the White House, and spoke of wishing to lead troops into war with Germany in the future, Wilson deflated him with the assertion that there was no plan to go to war and that in any case, TR would not be allowed to lead any troops into battle. TR wrote later that Wilson had destroyed his dream to follow up on his own declared “heroism” in the Spanish American War of 1898. TR vowed never to forgive him for that – and didn’t.

Herbert Hoover and Franklin D. Roosevelt had once been friends, and FDR even suggested Hoover as a possible Presidential candidate in 1920. But once Hoover became President, and FDR became Governor of New York in 1929, their friendship dissipated, as Hoover was faced with the Great Depression, and FDR became the leading proponent of direct government action to deal with the Depression, instituting the “Little New Deal” in New York State. When FDR became the Democratic nominee against Hoover in 1932, and when FDR won a landslide in the election, the two men could not agree on action to be taken during the four month “lame duck” period between the election and the inauguration. Hoover refused to talk with FDR in the automobile they rode in to the inauguration. For the next 12 years, Hoover would become one of the most damning critics of FDR’s New Deal and his foreign policy, and was one of the leading political figures in the isolationist organization, the America First Committee, in 1940-1941.

Harry Truman had disputes with future Presidents Dwight D. Eisenhower and Richard Nixon during his years in the White House and after. Truman had originally admired Eisenhower for his World War II leadership, and had suggested Ike run as a Democrat for President in 1948 with Truman reverting to his Vice Presidential role. However, once Eisenhower ran as a Republican for President in 1952, and heavily criticized Truman’s record in office, their friendship withered for a decade. (They became friendly again after meeting at JFK’s funeral.) The fact that Eisenhower had chosen Richard Nixon as his Vice Presidential running mate added to the antagonism between Truman and Eisenhower, as well as Truman and Nixon over the next generation. Nixon had been a harsh critic of Truman at the time of the Alger Hiss controversy.

While Ronald Reagan and Gerald Ford attacked each other in the 1976 Presidential contest for the GOP nomination, Reagan backed Ford once he agreed to replace Vice President Nelson Rockefeller with Kansas Senator Bob Dole. There was some discussion of Ford running for Vice President with Reagan in 1980, although it never came to fruition. And while there was certainly “bad blood” between Ford and Jimmy Carter in 1976, they became the best of friends in later years, visited each other often, and Carter gave the eulogy at Ford’s funeral in 2006 at Ford’s request. Carter was critical of Reagan, and all who came later, but was himself mostly ignored by them.

George H. W. Bush and Bill Clinton were strong critics of each other during the Presidential campaign of 1992, but once Clinton left the White House, they became good friends, and the joke was that Clinton had become the “adopted” son of the elder Bush. Clinton was cordial to the younger Bush, even when his wife, Hillary Clinton, was sharply critical of Bush policies over the eight years of the second Bush Presidency. Finally, George W. Bush stayed out of controversy over Barack Obama policies, even while his Vice President, Dick Cheney, became one of Obama’s leading critics.

So the relationships of Presidents with each other varied, with some hostile and some cordial, all making for a fascinating part of American history. Trump’s trashing of Obama was matched or surpassed by Adams-Jackson, TR-Taft, TR-Wilson, Hoover-FDR, Truman-Ike, and Truman-Nixon. The other relationships of Adams-Jefferson, Reagan-Ford, Ford-Carter, the Bushes and Clinton, and the Bushes and Obama were far more civil in nature.