Kissinger also Gave Away Israeli Secrets to the Russians

by Isabella Ginor and Gideon Remez

Related Link Trump all but admits the Washington Post story was right: He disclosed confidential information to the Russians.

The windfall that Russian Foreign Minister Sergey Lavrov picked up in the Oval office last week wasn’t the first time that a Muscovite emissary was handed an intelligence bonanza by an American interlocutor with an outsize ego. Given Henry Kissinger’s present volunteering of his experience in dealing with Russians to the Trump White House, it’s hardly surprising that he was responsible for a previous example. Trump apparently exposed US intelligence assets in Syria; in Kissinger’s case, he gave away data from Egyptian informants that the Mossad had shared with American services. 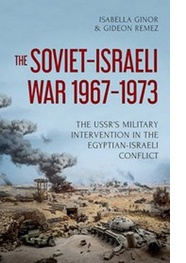 This was in the course of Kissinger’s celebrated “back-channel” talks with the Soviet Ambassador in Washington, Anatoly Dobrynin – in which, as Gideon wrote in a previous HNN article, Kissinger deluded himself that he could manipulate the Soviets, but they actually and repeatedly hoodwinked him. The following is adapted from our forthcoming book, The Soviet-Israeli War, 1967-1973.

Kissinger claimed in his memoirs that in their conversation on March 1, 1972 “Dobrynin sought to engage me in a dialogue designed, in effect, to impose the extreme Arab program. … When I countered with proposals related to Israel’s security concerns, he quickly lost interest.” But Kissinger’s own newly released summary of a talk later in the month (March 17) is clearly at odds with this description, and the report that Dobrynin filed is even more so: “Underlying all of Kissinger’s comments,” the Soviet envoy wrote, “was the apprehension that the top-secret talks with us about expediting a Middle East settlement, i.e., about the future status of Israel itself, could be made public in the US, especially at a time of heightened emotions during the election campaign. … The ‘crazy fanatics’ from the Jewish Defense League would accuse him of ‘betraying Jews’ and might then even make an attempt on his, Kissinger’s, life.”

Dobrynin added snidely that his back-channel partner, “it must be said, is not notable for great personal courage.” But for the Soviet ambassador, the most startling part of the exchange was when Kissinger seemed to jeopardize a vital Israeli asset: “Kissinger remarked, with noticeable hesitation, that Israeli intelligence ‘has very good sources of information in the highest circles of the Egyptian government.’ If [Egyptian President Anwar] Sadat finds this out … from the Soviet side, he might share this information with a certain circle of individuals, from where it could go further, to Israel. This,” Dobrynin noted, “is the first time Kissinger has mentioned Israeli agents in direct proximity to Sadat.”

So it is rather rich that Kissinger’s memoirs claim he stood up for Israel’s security interests. He was obviously referring to – and unmasking -- Ashraf Marwan, a top aide too Sadat and the son-in-law of the latter’s predecessor Gamal Abdel Nasser. Marwan had by now been passing information to the Mossad for over two years.

The Israelis confided this prized intelligence as a valuable gift to their US counterparts, expecting a quid pro quo. During her talks in Washington in early December, Prime Minister Golda Meir gave President Richard Nixon and Kissinger the transcript that Marwan had provided of Sadat’s talks with Soviet leader Leonid Brezhnev in October. Mossad chief Zvi Zamir delivered another copy to CIA Director Richard Helms, whose experts confirmed (or fell for) its authenticity.

Congratulating Zamir on this achievemnent, Meir believed the information so impressive that sharing it helped move Nixon toward resuming sales of F-4 Phantom jets to Israel. The Israel Air Force had lost unsustainable numbers of these aircraft and their crews to Soviet-manned SAMs in the War of Attrition along the Suez Canal, but the US administration had been slow to replace them. Marwan’s information was important enough to bring Nixon around. According to Israeli informants quoted by historian Uri Bar-Joseph, the document’s source was not named to the Americans, but it could only be a member of Sadat’s entourage.

No wonder, then, that Dobrynin could hardly believe his ears when Kissinger revealed such an asset, As he wrote to Moscow, “lt is hard for us to judge the reliability of this information here (it could also be some kind of disinformation), but we think it necessary to point out this remark.”

The great irony is that, as we found, “the Center” in Moscow was already well aware that Marwan was being operated by Egypt as a highly effective double agent, and being used by the Soviets too for feeding disinformation to the Israelis and others. This super-sensitive matter was highly compartmentalized, so Dobrynin evidently had not been informed. Assuming the Soviets relayed Kissinger’s tip to Egypt it only confirmed Marwan’s success. In any event, his continuing role shows that he was not compromised by Kissinger’s disclosure – another clue that Marwan’s services for the Israelis were indeed staged by Egypt. In March 1973, an expert visitor to Egypt still listed “Mirwan” first among “three men reportedly closest to Sadat.” In the wee hours of Yom Kippur that October, he warned Zamir that Egypt and Syria were about to launch a war the same day – too late to call up and effectively deploy Israeli reserves. When he fell or was pushed to his death from a London high-rise in 2007, both countries claimed him as a hero.

Americans concerned for their national security can only hope against hope that Trump’s loquacious bragging likewise told the Russians something they already knew. But even with Kissinger’s expert advice, the United States won’t get so lucky every time Trump lets loose.