James L. Gelvin is professor of modern Middle East history at the University of California, Los Angeles.  He is author of five books, including the forthcoming, The New Middle East: What Everyone Needs to Know. 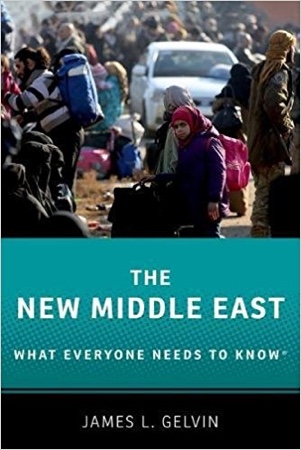 Poison gas. ISIS. Terrorism. The Arab Middle East has experienced more than its share of attention-grabbing horrors. But the twenty-four hour news cycle, with its relentless focus on the here and now, obscures the greatest problem the region faces: The threat to human security.

The United Nations Development Programme (UNDP) defines human security as “the liberation of human beings from those intense, extensive, prolonged, and comprehensive threats to which their lives and freedom are vulnerable.”

At present, human security indicators for the Arab world are trending in an alarming direction. While not comprehensive, here is a list of the half-dozen greatest threats to human security in the region:

According to The Economist’s “Democracy Index 2016,” there is not a single full democracy in the Middle East. The highest ranked Arab state is Tunisia, #69 out of 167 countries surveyed.

Among the twenty-two members of the Arab League, The Economist labels sixteen as authoritarian—the worst proportion of authoritarian states of any region in the world.

Misrule was one of the two most important complaints lodged by protesters during the Arab uprisings. The other was poor economic conditions.

And as those protests and other violence spun out of control, economic conditions only got worse. As of 2014, 28 percent of Iraqis, 33 percent of Libyans, 38 percent of Gazans, 54 percent of Yemenis, and more than 85 percent of Syrians lived in poverty.

2. Population growth: As of 215, there were approximately 392 million people living in the Arab world—more than twice as many living there in 1980. Although the rate of growth is declining, the dramatic increase in numbers in a little over thirty-five years has strained available resources and state capacities, particularly when it comes to providing adequate healthcare and education.

Population growth has diminished the region’s most valuable resource—water. Increases in population have led to overgrazing, unregulated land use, and soil exhaustion. These, in turn, have led to expanding areas of desert that in 2010 threatened 20 percent of the territory of the entire Middle East.

And water resources are getting scarcer: In 1955 three Arab states were below the water poverty line; that is, people living in those countries had fewer than fifty liters of water a day—the bare necessity—for drinking, personal hygiene, bathing, and laundry needs. By 1990 there were eleven. By 2025, it has been predicted there will be eighteen—out of twenty-two states in the region.

3. Economic stagnation: Besides oil (and unemployed youths), the Arab Middle East has little to export. And while opportunities were expanding in other regions, they were contracting in the Arab Middle East: The region was less industrialized at the beginning of this century than it was in 1970.

What are the reasons for the Arab world’s current economic malaise? Certainly, violence and state breakdown have contributed. Economic losses in Syria since 2011, for example, are estimated to be $275 billion and unemployment has reached 58 percent.

So has the low price of oil, which has compelled even Saudi Arabia to look for ways to wean itself from oil-dependency.

But there are more fundamental reasons as well, such as the poor state of higher education in the region. Of the top 300 universities in the world, only one—Abdul Aziz University in Saudi Arabia—is in the Arab world.

4. Subordination of women: Every year, the World Economic Forum publishes its Gender Gap Report which ranks countries based upon such variables as women’s participation in the workforce, literacy, health, and inheritance rights, and the like. According to the 2016 report, the Arab world is the worst region on earth to be a woman. The highest-ranking Arab country on its list was Qatar, which ranked #119 out of the 144 countries surveyed. Of the bottom twenty countries, eleven are in the Arab world. Yemen came in dead last on the list.

The Arab Middle East is also the worst region in the world when it comes to women’s workforce participation (25 percent). The region has the second lowest rate of female literacy (only sub-Saharan Africa is worse).

Why is this important? When it comes to development, economists place women’s workforce participation as the most important factor.

5. Climate change: While climate change will affect every region of the globe, the Middle East is more vulnerable than most for two reasons. The first has to do with food. The Middle East has a high dependence on climate sensitive agriculture. It is dependent as well on agricultural imports from areas that will also be affected by climate change.

Ninety percent of Egyptian wheat, for example, comes from abroad, mostly from Russia. In 2010, wild fires and a heat wave diminished the Russian crop by 40 percent, and Russia took its grain off the international market. Over the course of the following year, food prices in Egypt jumped 30 percent. Scientists have attributed the wild fires and heat wave to climate change.

The second reason the Middle East is vulnerable to climate change is that a large proportion of the region’s population lives in coastal areas. There are forty-three heavily inhabited coastal areas in the region.

6. “The vulnerability of those lost from sight”: The UNDP used this phrase in its 2009 report, Challenges to Human Security in the Arab Countries to refer to the plight of those at the margins of society: abused women, child soldiers, migrant laborers, and the like. Also among those lost from sight are refugees and Internally Displaced Persons (IDPs). (IDPs are similar to refugees but have not crossed an international border.)

The Arab Middle East also has the highest number of IDPs of any region in the world. According to statistics accumulated between 2014 and 2016, there were 263,500 IDPs in the Palestinian territories (displaced from 1948 through 2014), 417,000 in Libya, upward of 1.2 million in Turkey (many as a result of the Kurdish insurgency and the government’s counterinsurgency campaign), 2.8 million in Yemen, and more than four million in Iraq.

While he was in office, Barack Obama tried to get the United States to “lighten its footprint” in the Middle East and pivot to East Asia, where, he believed, the history of the twenty-first century would be made. In light of the real crisis in the Middle East, his reasoning was sound.