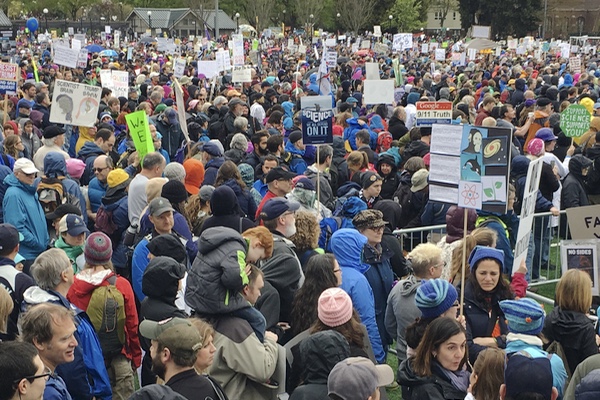 Tired of the 100-day review of Donald Trump’s Presidency? You should be, with one exception. The drama, ambition and accomplishment in the first 100 days of Donald Trump’s presidency lie not in his record, but in the resistance to this President.

Ever since Franklin Roosevelt pushed through major legislation in his first 100 days in office, newly elected Presidents have had their early record measured against the same 100-day standard. Donald Trump has called this threshold “ridiculous” and “artificial,” which would probably be an accurate statement except for the fact that he used the same 100-day timetable during his campaign to lay out an action plan portraying his ability to achieve a plan as bold and far-reaching as FDR accomplished.

The country was in a very different place in 1933, well into its third year of economic crisis, following the stock market crash in October 1929. Unemployment levels moved from 4 million people in 1930 to 15 million by the time Roosevelt took office. Thousands of banks had failed and industrial production had fallen by half. The crisis demanded action, and demanded it on a fast timetable.

Roosevelt delivered in a way that re-shaped the nature of how Americans view government, addressing through emergency legislation and executive action all aspects of relief, recovery and reform needed to reverse the direction of the economy. It was the nature of the crisis that dictated the unprecedented nature of FDR’s first 100 days.

That’s why this 100-day standard makes little sense. Trump, despite his rhetoric indicating he inherited a mess, actually took over the reins of an economy in recovery, certainly better than the one his predecessor inherited in 2009.

What has been more akin to FDR’s dramatic first 100 days in 2017 has been the unprecedented nature of the opposition to Trump.

First, there are the protests. They started before Trump took the oath of office and then swelled in the first 24 hours of his Presidency. There were other demonstrations greeting newly inaugurated Presidents, from the 5000 women who marched before Woodrow Wilson’s inauguration demanding the right to vote, to the anti-war protesters at both Nixon inaugurals and the thousands who marched to express their opposition to the election of George W. Bush in 2001.

What was different this time was the size of the demonstrations, not only in Washington DC, but around the nation and in cities in other countries. Everyone but Trump and his inner circle acknowledge that the women’s march on the day after the inauguration surpassed the crowd attending his inauguration. Another difference is that the protests continue, against Trump’s efforts to ban Muslims from entry into the U.S., to build a wall on the southern border, to repeal health care, to refuse to release his taxes, to disregard the science of climate change.

Second, despite the control of both the executive and legislative branch by Trump’s party, the opposition has been surprisingly successful in derailing the pledges that the Republicans ran on, most notably the repeal of the Affordable Care Act. Funding for the border wall is a non-starter, tax reform has been reduced to a public relations one-page set of principles, and there’s no sign of a massive infrastructure program. Republican Party unity did help ensure that all of Trump’s nominees for his cabinet, except for the two who withdrew, were able to pass through the Senate, which also confirmed his nominee for the Supreme Court position, left vacant for over a year when the Republicans refused to grant a hearing for President Obama’s selection.

A third unprecedented focus of the opposition has been the speed with which courts have responded to requests to halt President Trump’s executive orders. Both of Trump’s executive orders to ban Muslims from entering the U.S. have been thrown out, as has his administration’s threat to withhold federal funding from cities refusing to deputize their local police forces as deportation officers. One organization – Citizens for Responsibility and Ethics in Washington, CREW – has filed a lawsuit alleging Trump’s conflicts of interests violate the Constitution and another, the American Civil Liberties Union, is preparing a second such suit.

Fourth, the reaction to Trump from beyond the borders has been an unprecedented rejection of what he is trying to impose here and abroad. Not only do people outside the U.S. in the numbers of millions continue to join the protests, but voters in the Netherlands rejected the candidate who looked like Trump, and French voters will likely follow suit, worried about what they are seeing on this side of the Atlantic. Far from acting as a global superpower, the U.S. is on the receiving end of lectures from world leaders like Theresa May and Angela Merkel on Russia, Justin Trudeau on trade and Xi Jinping on North Korea, all viewing perhaps Trump’s self-proclaimed penchant for unpredictability and flexibility as euphemisms for incompetence and lack of strategy.

Fifth, despite obstacles from the White House and certain Republicans, investigations within the Department of Justice and Congress were launched to look into the role played by the Russian government in helping Donald Trump get elected. The implications for American democracy of any connection between Donald Trump’s campaign and the Russian government in that effort necessitates a patient and thorough investigation and compilation of the facts.

Finally, a new, invigorated civic and political activism has sprung up to unprecedented levels. Across the country, citizens are mobilizing to make their voices heard through town hall meetings where members of Congress are seeing attendance rise tenfold since January 20. The volume of phone calls to Congress are setting records, reaching 1.5 million calls to the Senate alone. Ad hoc groups have formed to partner voting districts across the red-blue political divide, to address redistricting that favors Republican candidates, to refuse to shop at businesses owned by or supporting the President and his family, to join voter registration drives.

When FDR set the standard for 100 days of accomplishment by an incoming President, he did so in the face of an acute crisis. The crisis facing the country now is not any external mess, but is all that the new President stands for. Addressing that crisis through a sustained opposition has been the real story of the first 100 days.