William Lambers is the author of The Road to Peace. He has been published by the New York Times,  Huffington Post, Cincinnati Enquirer, Buffalo News, The Hill and many other news outlets.

A US Naval base at Sackets Harbor, NY during the War of 1812. The Rush-Bagot agreement disarmed British and American warships on the Lakes in 1817. (U.S. Naval Historical Center)

President Trump had some harsh words for Canada recently over their trade policies for the dairy industry.

But Trump should be praising the friendship with our neighbor to the north. In fact, if he watched a recent episode of the Tonight Show with Jimmy Fallon he would have a good briefing in U.S.-Canadian relations. 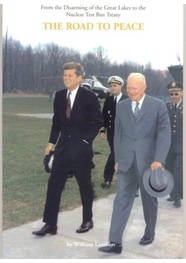 It happened in a dance off between Fallon and actor Mike Myers. Myers was representing his homeland Canada and Fallon the United States. When the dancing duel was ending, Myers talked about the peaceful relations between the U.S. and Canada. He mentioned the Rush-Bagot agreement, which was negotiated when Canada was a colony of Great Britain.

The Rush-Bagot agreement disarmed American and British warships on the Great Lakes and Lake Champlain, except for a few patrol vessels. The agreement is now 200 years old this April. It's an enduring model for peace and disarmament that can inspire us today.

It happened on April 28-29, 1817 in Washington DC when Richard Rush, the U.S. acting Secretary of State, exchanged diplomatic notes with British minister Charles Bagot. Just some simple paper put disarmament into action and moved the two nations closer to peace.

To fully appreciate this achievement we have to put ourselves back in that time period, for the thought of Britain and the U.S. at war is unthinkable today.

But in 1817, the two nations were only a few years removed from the War of 1812. That conflict saw battles unfold along the U.S. and Canadian border, including on the Great Lakes.

We hear stories today about refugees fleeing war-torn lands overseas. During the War of 1812, it was civilians from American and Canadian cities running for their lives from military assaults.

Even after the war had ended, peace did not suddenly emerge between the U.S. and Britain. There were boundary and territorial issues to settle along the very lengthy U.S.-Canadian border. These would take many years to resolve.

The prospect of another war between Britain and the U.S. was a real possibility at that time. An arms buildup on the Great Lakes and Lake Champlain could set the two nations on a collision course… again.

An arms race would increase tension. As John Quincy Adams, who was American minister in London, warned, "The moral and political tendency of such a system must be to war and not to peace."

Adams was one of the major players in the talks leading to the agreement. So too was James Monroe, who was Secretary of State before assuming the presidency in 1817.

President Monroe praised the Rush-Bagot agreement stating, "By this arrangement useless expense on both sides and, what is of still greater importance, the danger of collision between armed vessels in those inland waters, which was great, is prevented."

Monroe was no doubt relieved the U.S. would avoid a massive expense of armaments on the Lakes, which would have robbed valuable resources from the young nation.

Not having an arms race on the Lakes removed a source of tension that could aggravate other issues, such as who owned the prized Oregon Territory.

Britain and the U.S. were at risk of going to war over Oregon until a treaty in 1846. Had there been an armed collision, or a miscalculation on the Lakes during that time, it could have altered the course of history in a violent way.

The Rush-Bagot agreement has even inspired negotiations on ending the threat of nuclear weapons. When President John F. Kennedy was trying to achieve a Limited Nuclear Test Ban Treaty with the Soviet Union in 1963, he got some help from Rush-Bagot.

The Rush-Bagot example of peace was used by Harold Stassen during his testimony before the Senate, when they were determining whether to vote in favor of the nuclear test ban. The Limited Test Ban Treaty was approved, an opening step to end all nuclear tests and eliminate these weapons from the face of the earth.

The Rush-Bagot agreement can continue to inspire nations to peace treaties. It has stood the test of time, and helped build the famous 3000 mile border of peace with Canada.

Over the 200 year history of Rush-Bagot there have been many challenges. During the American Civil War, the agreement was almost ended.

Peace though has persevered. And since that simple exchange of diplomatic notes in April, 1817 we have been spared from a dangerous and costly arms race on the Lakes.

We must hope and pray that more lasting agreements like Rush-Bagot can become reality and help spare nations from the scourge of war.