Donald Trump, meet James Madison. At the Republican National Convention in Cleveland in July of 2016, Trump famously declared: “Nobody knows the system better than me so I alone can fix it.” But perhaps Mr. Trump was unaware of the Madisonian system that stood in his way and that provides a series of checks and balances and parchment barriers designed to ensure that too much power is not being accumulated in any one power center or person. 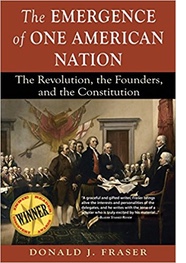 It is, of course, well known that Madison and the other fifty-four delegates that gathered in Philadelphia for the Constitutional Convention in 1787 designed a system that would preserve liberty by checking power. Madison, in Federalist No. 51, wrote: “Ambition must be made to counteract ambition. The interest of the man must be connected with the constitutional rights of the place.” This was needed because men were not angels and would always grasp for more power. For Madison, the ambition of those who seek and hold power contains within it the seed of restraint. Perhaps President Trump has now seen this principle in action in his failure to repeal and replace Obama care. No one man can fix the problems we face, since the American system was designed to thwart such authoritarian impulses. The Framers formulated a constitutional scheme that places a very high premium on the ability to bargain and negotiate among multiple power centers (the House, the Senate, the permanent bureaucracy) in order to achieve results. Once again, Mr. Trump meet Mr. Madison.

Perhaps less well known to the general public is that the Framers made a major blunder at the Convention when they failed to include a bill of rights in the original Constitution. As the Convention was concluding in September of 1787, George Mason proposed that a bill of rights be added to the document as a means to gain greater support from the people. He believed that “a bill might be prepared in few hours.” The Convention voted to exclude a bill of rights, with all ten states present voting no. This decision would cause the Framers much criticism in the upcoming state ratifying conventions. The reason the Convention voted so overwhelmingly against the inclusion of a bill of rights was simple fatigue. The other delegates knew that, although Mason was correct in terms of the time it would take to prepare a bill of rights, debate over its contents could potentially consume several more weeks. Those still in attendance had spent over four months in preparing the proposed new plan of government, and they dreaded the thought of spending any more time away from their homes, farms and businesses.

Madison was originally opposed to a bill of rights, not because he opposed the protection of such rights, but because he thought they were ineffective. In a 1788 letter to Thomas Jefferson, he stated that his real concern was that “experience proves the inefficacy of a bill of rights” when it is most needed. “Repeated violations of these parchment barriers have been committed by overbearing majorities in every State.” But Madison was also in the process of changing his mind. In his letter to Jefferson, he indicated that, over time, citizens would come to value “the political truths” contained in such a statement. A bill of rights could “counteract the impulses of interest and passion” that motivated much of political activity. The idea that a bill of rights could cause people to put aside their own self-interest and come to value the protection of minority rights seems to contradict much of Madison’s concerns with the way in which overbearing majorities may act. But it is also the key to his conversion on the need for a bill of rights. Madison believed that as people come to value the rights included in the Constitution, they will also defend them. It was a prescient moment for the Father of the Constitution.

Parchment barriers may be more effective today than during Madison’s time. In the late 1790’s the United States was engaged in what historians have called the Quasi War with France. The Republican Party of Jefferson and Madison were pro-French, while the Federalists were pro-British. The Quasi War occurred in the aftermath of the Federalists negotiation of the Jay Treaty with Great Britain, which was seen by France and many Republicans as pro-British. As war fever spread in the country, the Federalists approved a series of bills known as the Alien and Sedition Acts. The Alien bills were designed to rid the country of French émigrés and “the hordes of wild Irishmen” who were considered pro French and primarily Republicans. The most clearly partisan of the measures was the Sedition Act that was passed in July of 1798. The Act made it a crime to speak or publish “any false, scandalous, and malicious writings against the United States, or either House of the Congress of the United States, with intent to defame…or to bring them…into contempt or disrepute…” The Sedition Act was clearly directed at the Republicans, making it essentially illegal to criticize the government, in violation of the First Amendment. President John Adams signed the bills.

War or the fear of war has a way of creating some policies in regards to civil liberties, and the Alien and Sedition bills were the first example of this under the Constitution. Madison summarized this best in May 1798 when he wrote to Jefferson: “Perhaps it is a universal truth that the loss of liberty at home is to be charged to provisions against danger real or pretended from abroad.” At this point in our history, “parchment barriers” would prove a weak check on the will of the party in power. This was during a period before the Supreme Court had established itself as co-equal branch of government. While the Framers of the Constitution had assumed the Court would decide the constitutionality of laws, the Constitution did not directly include this power, and it was not established until the Marshall Court’s ruling in Madison v. Marbury.

The Alien and Sedition Acts were the first but certainly not the last time that “parchment barriers” proved ineffective in holding back an unconstitutional act. In the twentieth century, the most egregious example was the internment of Japanese Americans during World War II. But “parchment barriers” are working better in containing some of the worst excesses in our modern era. While it took some time for the court system to restrain the Bush Administration’s excesses in the war on terror, the courts have acted in lighting quick manner to restrain President Trump’s travel ban. While the administration may ultimately prevail, perhaps the new president is learning that in the republic of James Madison, no one person can “fix” problems. We thank Mr. Madison for that, among other things.