Three Times When We Blundered into War

David R. Contosta, Ph.D., is Professor of History at Chestnut Hill College in Philadelphia. He is the author of more than 20 books, including studies of Henry Adams, Abraham Lincoln, and Charles Darwin. He has also written, co-produced, and appeared in several historical documentaries for Public Television. 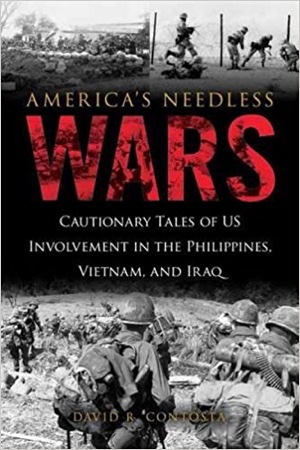 Three times in just over one hundred years, the United States fought three unnecessary wars: the conquest of the Philippines in the years around 1900; the War in Vietnam during the 1960s and 1970s; and the Iraq War beginning in 2003—all within the course of a very long modern lifetime. These wars took the lives of nearly seventy-six thousand Americans, and the death toll for those on the other side was at least two million. These wars seriously compromised our country’s moral standing in the world, as the United States acted much like other great powers in history toward weaker peoples who posed no real threat to national security.

All three of these wars violated a core principle of what is known as “just war” theory,” a body of well-established norms that can be traced back 1,600 years to Saint Augustine of Hippo, and that have become embedded in modern international law. Central to all these norms are the concepts of “necessity” and “last resort.” It is clear from a careful research of the evidence that American wars in the Philippines, Vietnam, and Iraq do not meet the criteria of supreme emergencies—or even moderate emergencies—that would give the United States no alternative but to resort to war.

In the Philippines, the United States used military force to conquer the islands as a spoil of battle after American victory in the Spanish-American War, and in the process put down Filipino desire for independence. Likewise in Vietnam, the United States fought for over a decade to deny that country national self-determination. In Iraq the country went to war over non-existent “weapons of mass destruction” and out of a naïve belief that democracy could be inserted by force in a place where there was no tradition of democracy. In none of these three instances was American security threatened.

Ironically, these three conflicts had the effect of undermining the country’s security and well-being: The American conquest of the Philippines made the United States more vulnerable to attack by Japan four decades later, the war in Vietnam heightened Cold War tensions that threatened to spill over into a nuclear conflict, and the Iraq war exacerbated terrorist threats and terrorist attacks against the United States and its allies.

How, then, to explain why presidents and their supporters decided to take the country to war in these three cases? Although they were fought at different times, in different places, and for differently stated reasons, the decision makers acted out of ignorance, arrogance, and unreasoning fears, combined with partisan gamesmanship and the failure of media to inform the public accurately about the drive to war and its possible consequences.

Ignorance, arrogance, and fear can be seen as an intertwined and self-reinforcing triad. Ignorance of the history, culture, and conditions of other people and nations contributes directly to suspicion and fear of them as unknown and possibly hostile enemies. Ignorance feeds arrogance, since it encourages claims that the realities of a situation are very simple and that the task of defeating any foes will be easy and straightforward. Arrogance and fear also go hand in hand, especially when leaders exaggerate fears and make arrogant promises that they alone know how to vanquish the source of those fears.

At the same time, members of opposition political parties are likely to claim that those in power are not standing up to the nation’s supposed enemies, as during the Cold War when charges of being “soft on Communism” were hurled with reckless abandon. Meanwhile, the media, often referred to as the “fourth branch of government,” has usually been reluctant to question leaders’ decisions for unnecessary wars. The reasons for such media failures are several: positive reporting in favor of war attracts readers, listeners, and viewers. Media executives and reporters do not want to be out of step with public opinion or find themselves being accused of insufficient patriotism. And failure to fall in line with calls for war might well be bad for business.

I do not mean to say that I am a pacifist, since I believe some wars are unavoidable and must be fought. After all, my father and the fathers of many schoolmates and friends fought a terrible conflict to free suffering millions on several continents. Nor do I criticize the millions of brave and honorable men and women who have served in our armed forces, or accuse the civilian decision makers who sent them into harm’s way of wishing to see millions of people killed and maimed. But I do believe that presidents, legislators, and opinion makers made serious errors of judgment when they sent young Americans off to fight unnecessary wars.

History does not repeat itself exactly, but as Mark Twain so aptly put it, “history . . . does rhyme.” The danger comes when memories of unnecessary wars and their causes fade and some future president is tempted to ignore the lessons of history.

Today, the country cannot afford catastrophic errors of information and judgement that would lead to another unnecessary war that, given the proliferation of nuclear weapons, could end in the destruction of all humanity. Of utmost delicacy are the ongoing efforts to stop, or considerably limit, North Korea’s nuclear program. There is no place in these efforts for ignorance, arrogance, unreasoning fear, political games, and media failure to provide honest and accurate accounts. With access to the resources of dozens of world-class universities in the United States, along with the information and expertise available from the State Department and the various intelligence services, there is no excuse for such lethal blundering.