Billy J. Stratton is an associate professor of English at the University of Denver and the author of Buried in Shades of Night: Contested Voices, Indian Captivity, and the Legacy of King Philip’s War. 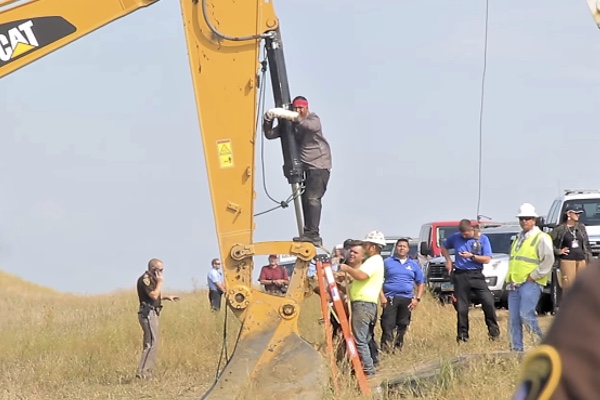 Lakota man locked down to construction equipment at direct action against Dakota Access Pipeline, By Desiree Kane, CC BY 3.0

Resistance to colonial oppression has long been a way of life for Lakota and Dakota peoples living at Standing Rock. Their interactions have been defined to a large extent by conflict over land and resources, and through resistance to systematic efforts aimed at the destruction of their cultures and sense of identity through government policies such as allotment, termination, and relocation, along with their forced assimilation in boarding schools and the repression of Native spirituality and religion. 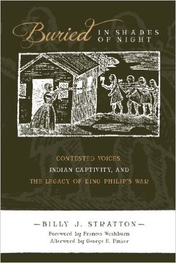 Native peoples’ claims to the lands of the Northern Plains, expressed in the very names of North Dakota and South Dakota, have been systematically eroded over the past century and a half through the instruments of war, broken treaties, theft, and corruption. The details of this historical context forms the foundation of the conflict over the construction of the Dakota Access Pipeline, and has become a flashpoint in a twenty-first replay of manifest destiny.

Sustained encounters between the Lakota people and settlers/colonists didn’t occur until after the Louisiana Purchase in 1803, and the subsequent expedition led by Lewis and Clark to survey the newly acquired lands transferred unbeknownst to its Native inhabitants. Despite the commitment expressed by the fledgling United States Government in the Northwest Ordinance of 1787, ensuring that “the utmost good faith shall always be observed towards the Indians, their land and property shall never be taken from them without their consent; and in their property, rights and liberty, they never shall be invaded or disturbed, unless by just and lawful wars authorized by Congress,” hostilities flared by the 1840s with the arrival of settlers seeking opportunity, free land, and riches. The intensifying struggle over land and resources provided an impetus for conflict, which disrupted Native ways of life and the natural balance necessary to sustain their communities.

The antagonism was exacerbated by the California gold rush that by the 1850s had intensified to the point that the US government was compelled to act. The solution, influenced by the military strength of the Native nations of the plains, was the negotiation of the Fort Laramie Treaty of 1851. In this document, Lakota, Dakota and others agreed to allow the US government to construct roads and military forts within their territories in return for an annuity payment of $50,000 a year for fifty years, with the United States bound “to protect the aforesaid Indian nations against the commission of all depredations by the people of the said United States.”

The treaty, in which over 12 million acres of land was reserved to Native peoples, including portions of North Dakota, containing the Standing Rock Reservation, the western half of South Dakota, and parts of Nebraska, Wyoming, and Montana, was intended to ensure “a lasting peace between all the nations assembled.”

Within a year the terms of the treaty would be unilaterally violated by the US Senate’s action to reduce the annuity from fifty years to ten. Moreover, officials were neglectful in their responsibilities to safeguard these lands against the encroachment of disreputable settlers who soon came to be identified as wašíčus, “takers of the fat.” The discovery of gold in Colorado in 1859 and Montana in 1861 accelerated the influx onto these lands and the establishment of the Bozeman trail--a further contravention of the 1851 treaty.

The violation of the Ft. Laramie Treaty led to decades of sporadic warfare punctuated by events including the Dakota War of 1862 and the so-called Fetterman fight, which prompted calls from military commanders to “attack and kill every male Indian over twelve years of age.” With the fervor of exterminationist rhetoric rising to a fevered pitch, along with the massacres of Arapaho, Cheyenne, and Blackfeet people at Sand Creek, and the Washita and Marias rivers, Native peoples of the Northern Plains had little choice but to fight. The Powder River War, also known as Red Cloud’s War from 1866 to 1868, checked the advance of settlers and led to the signing of a second Fort Laramie Treaty of 1868 to reestablish peace.

Many settlers, however, were not happy to be deprived of such valuable land, including the Black Hills, which the Lakota called Paha Sapa and considered sacred. The 1868 treaty was soon broken by the activities of miners, settlers, and soldiers following the established pattern. These conflagrations culminated in battle of the Greasy Grass (Little Big Horn) of 1876 with the routing of the Seventh Cavalry and the death of General Custer, alongside over 250 of his troops. This victory was short-lived, however, with the Lakota, Cheyenne, and Arapaho enduring the full wrath of the US military in the following years. While Sitting Bull led his group of Lakota to Canada seeking refuge from persecution, reservation life had become dreadful.

Sitting Bull and his followers remained in Canada for four years before returning to his home community at Standing Rock. With the Native nations of the plains mostly confined to reservations and made dependent upon the government for rations, the situation was bleak. Into this void, created of such trauma and suffering, emerged the messianic ghost dance movement.

The murder of Sitting Bull, and then, two weeks later, the infamous Wounded Knee Massacre of Dec. 29, 1890 directly resulted from the exaggeration of fears evoked by this ceremonial practice. Appropriating the voice of Black Elk, and drawing upon Lakota symbolism, John G. Neihardt in Black Elk Speaks, somberly cast this period as that “of a holy tree that should have flourished in a people’s heart with flowers and singing birds, and now is withered; and of a people’s dream that died in bloody snow.”

Such bleakness was not Black Elk’s vision, however, but one of tragedy and victimhood composed by Neihardt, and acting to deprive the Lakota and other Native people of agency, while negating the possibility of a viable future. As horrific as the Wounded Knee massacre was, the peoples’ survivance was not extinguished on that day, nor their spirit broken.

For in our contemporary moment, as a new administration comes into office and the approval of the pipeline seems imminent, courageous people remain at Standing Rock in remembrance of this other American past, continuing to defend the lands reserved by treaty, the right to clean water; both for them and for us, as they say mni wiconi, water is life. To be Lakota, Dakota, who maintain the principle conveyed in the phrase: Mitákuye Oyás'iŋ, all are related, it is as it must be, and cannot be otherwise.