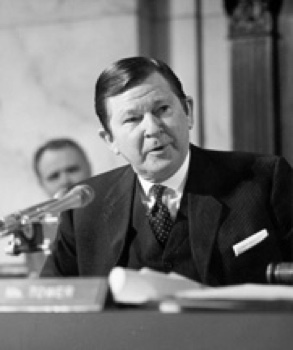 With the rise of Donald Trump and the unsettling authoritarian tone of American politics today, it is completely understandable why many Americans are anxious about the Trump administration and its less then professional behavior to date.

However, the sense of hysteria, fear, and paralysis surrounding the Trump administration is a bit overblown. The Senate can and should check Presidential power. That’s the lesson of the John Tower story.

John Tower was a four-term Senator from Texas serving from 1961 through 1985 and was the first GOP Senator to represent Texas in Washington since Reconstruction. While in the Senate, Tower served on the Joint Committee on Defense Production and was a long-serving member and eventual chair of the Armed Services committee, which is directly responsible for the oversight of the nation’s military including the Department of Defense, along with other related military projects dealing with energy, research and development, and military personnel matters. Tower had a distinguished though controversial career in Congress and was known for looking out for the economic interests and development of the Lone Star State.

Following Tower’s retirement from the Senate in 1985, he remained active in political life and President Reagan named him chief US negotiator at the Strategic Arms Reduction Talks in Geneva. Reagan subsequently put him in charge of the special review board tasked to investigate the Iran-Contra affair.

Despite the Tower Commission’s report’s highly critical conclusions about the Reagan administration, President George Herbert Walker Bush nominated Tower to serve as Secretary of Defense in 1989. Tower’s nomination, however, was rejected by the Senate.

Tower’s repudiation marked the first time the Senate had rejected a new President’s cabinet nominee. A quick and questionable vetting process on the part of the Bush administration coupled with weeks of allegations and stories about drinking and womanizing along with concern over potential conflicts of interest with defense contractors led to a 47–53 defeat of Tower’s nomination.

After the Senate’s rejection, President Bush appointed Tower to the President's Foreign Intelligence Advisory Board, which did not require Senate confirmation, and Tower went on to work as both a professor and consultant.

What made Tower’s rejection so surprising here is that not only did he possess the deep knowledge, connections, and qualifications to succeed in the role of Secretary of Defense, but that the Senate – which normally treats its members in a genteel and convivial manner – rejected one of its own. Tower’s obituary in the New York Times even noted that “In the normally clubby Senate, Mr. Tower was regarded by some colleagues as a gut fighter who did not suffer fools gladly, and some lawmakers indicated that they were only too pleased to rebuke him.”

My point here is quite simple – the Senate has constrained Presidential appointments in the recent past. There is no reason that members of the Senate could not do it again.

Given the fact that so many Trump nominees seem to be plagued with very similar issues relating to either questionable behavior or conflicts of interest, Americans can and should ask their elected Senators to act accordingly based on the needs of the nation.

While it was the case back in 1989 that the Democrats controlled the Senate, Republicans in today’s 115th Congress do not hold a filibuster-proof, super-majority in the Senate. The Democratic leadership could take a more assertive position on many of these nominees and work with the handful of Republican members of the Senate who already strongly oppose Trump and his policies.

Some Democrats have begun to pushback such as New Jersey Senator Cory Booker, who testified against Senator Jeff Session’s nomination for Attorney General. Other Senators have spoken out harshly against nominees like Betsy DeVos, who was named to head the education department. However, it is unclear if these criticisms will be enough to derail their confirmations or if these public engagements, which play well on social media, are anything more than public grandstanding for other political ends.

Nonetheless, the Senate has incredible power against the Executive given the Constitution’s “advise and consent clause.” The Senate should use this power as needed given its intended role in our checks and balance system.

The ignorance of political history often plagues much discourse surrounding the debates of our day. This limited understanding of our nation’s great political actors and actions of the past has fed into the current anxiety that surrounds the rise of Donald Trump and an increasingly imperial and bizarre Presidency. It shouldn’t.

We need to remember that the United States Senate rejected a newly elected President’s nominee thirty-years ago over concerns similar to those that face many of Trump’s nominees today.

Senators can deny cabinet positions today to Trump nominees and challenge and block many other actions undertaken by the current administration. The question is whether or not there is enough will within the electorate to exert pressure and whether or not there are sufficiently well-organized efforts to manage these concerns via the Senate. The nationwide women’s marches over the weekend revealed how quickly Americans can work together – there is no reason this momentum should stop. Social media makes coordination fast and free. Instead of being apprehensive, I suggest that the masses start organizing and talking to those in the Senate.