The Three Problems with Historical Comparisons to Trump

David J. Shorten is a PhD Candidate at Boston University and co-editor at Yester, a webpage devoted to popular history. He is currently writing a dissertation that recovers the progressive history of anti-globalism in the twentieth century. 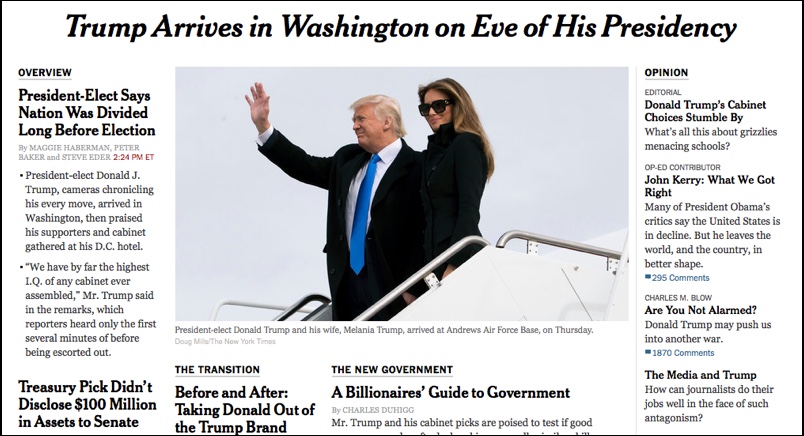 What do Lyndon Johnson, Richard Nixon, and Ronald Reagan have in common? They all get compared to Donald Trump. Whether he exemplifies LBJ’s mastery over the art of the deal or his need for a psychiatrist, if he’s seeming to usher in Tricky Dick’s third term or abiding the K.I.S.S. principle like the Great Communicator; whatever the platform or personality trait, historians, political analysts, and billionaire investors all enjoy comparing the president-elect to presidents past.

Seeing as Mr. Trump has just been inaugurated POTUS, and no one can confidently tell what his administration will seek to accomplish, commentators are likely to continue manufacturing these associations with as much consistency as the PEOTUS’s promises on Twitter. It thus seems reasonable to ask: what use do historical comparisons serve, if any?

Inverting the question for a moment, perhaps we should ask, what’s wrong with comparing past and present political figures? Let’s call it the 3 ‘P’s Problem.

One issue historians contend with when contemplating modern times is presentism: analysis blinded by the current moment. If journalists write the first draft of history, historians revise the draft. But clarity often requires the luxury of distance.

For a long time after Barry Goldwater’s dismal defeat to Lyndon Johnson in the 1964 election, for example, many commentators believed that American conservatism’s trial-run had failed, and that it would be permanently banished to the fringes of American political life. Midcentury historians contributed to this delusion by consistently dismissing American conservatism as an incoherent, “pseudo-conservative,” worldview. Far from crafting a genuine ideological threat to ascendant American liberalism, Richard Hofstadter argued in 1954, pseudo-conservatives were simply paranoid subversives who needed to treat their “violence, anarchic impulses, and chaotic destructiveness.”

Still lacking a conceptual basis for understanding the movement on its own terms amid the “Reagan Revolution” of the 1980s, the profession searched for a way to explain conservatism’s sudden and seemingly isolated success. Surely, we reasoned, Reagan’s victory did not mean that many Americans actually held conservative beliefs. Rather, whites were punishing liberal politicians for pushing civil rights reforms to the point of overtaxing whites and giving racial preferences to non-whites. Books about backlash, rage, and reaction abounded. “Race and taxes, on their own, have changed the votes of millions of once-Democratic men and women,” Thomas and Mary Edsall argued in Chain Reaction, published in 1991.

Today, we know enough about how new economic thinking, the growing influence of the Sun Belt, and evangelicalism contributed to conservatism’s mainstream successes that we can supplement the white backlash model with viewpoints that are less blind to conservatism’s stand-alone place in American history. But it took time to get there, both inside and out of the academy.

Very closely related to presentism is the problem of prognostication. After all, what use is comparing history to the present if not to predict the future? Unfortunately, a crystal ball constitutes a poor metaphor for historical analysis. Just ask Francis Fukuyama, who decided in 1992 that the Soviet Union’s downfall signaled “the end of history,” the ultimate triumph of American global capitalism.

Or ask David Frum, who made a compelling comparison between Trump and three-time Democratic presidential candidate William Jennings Bryan back in July. Both candidates, he noted, championed a forgotten white political class against plutocracy, farmers for Bryan and the post-industrial working class for Trump. Both offered novel, easily understood solutions to that class’s maladies, with Bryan trumpeting bi-metalism in his 1896 campaign, and Trump offering immigration and trade restriction in 2016. And both men took hold of declining political parties in times of economic anxiety.

What significance did Frum pull from this comparison? “In the aftermath of Bryan’s defeat is found the most urgently relevant comparison between the two candidacies,” he concluded, before hypothesizing how Trump’s defeat would thwart his agenda, fracture the Republican Party, and further marginalize the white working-class. He spilled no ink contemplating the meaning of a Trump victory. Unfortunately for Frum, that was on July 26, when polls favored Hillary Clinton 69% to 31%—approximately the odds of making a 30-yard field goal in the NFL, as my adviser liked to say.

So just remember, history doesn’t repeat itself the same way twice, and when familiar settings do resurface, expect tragi-farce.

The final ‘P’ in the problem triad is pointlessness. A great many political figures have risen to prominence on rising tides of nativism and economic anxiety. That’s why historians have so much trouble defining populism. Cherry-picking two for the sake of comparison leads to what evolutionists call analogous evolution—when two things resemble each other superficially, but do not actually share a common origin, like birds and bats.

If professional historical methods teach anything, it’s to look beyond individuals and their temperaments toward the environments that produce their power. Thus, the easiest way to avoid the 3 ‘P’s is to give up on historical comparisons and replace them with historicism—to quit analogizing and start contextualizing.

The way we frame history has consequences. One potential consequence is to let present concerns blind us from the rise of countervailing political movements. As with the rise of conservatism, historians refused for more than half a century to take anti-globalism seriously. During the advent of the “American Century” after World War II, historical work normalized the newly unified foreign policy establishment, which sought American political, military, and economic globalization. In our quest to frame the twentieth century as the century of triumphant liberalism, we branded critics of that globalist consensus naïve, backward-looking “isolationists.” (Richard Hofstadter, for one, counted “isolationists” among the “pseudo-conservatives” he so readily disparaged.)

Then, on November 8, 2016, Republican candidate Donald Trump shocked the public policy establishment by securing the presidency on a platform that consistently challenged America’s global role. Just as candidate Trump campaigned behind promises to restrict immigration, renegotiate unfavorable trade agreements, and penalize U.S. companies that moved operations overseas, the president-elect continues to rally his political base by appointing immigration and trade hardliners to his cabinet while announcing deals to prevent American manufacturing companies from closing Midwestern factories in favor of opening new ones in Mexico. These high-profile moves indicate that anti-globalism remains central to his agenda and to his appeal.

So let’s not weaponize history against ourselves, keep our eyes peeled for oncoming traffic, and avoid pointless prognostications for the present. And can we please hold-off on the Hitler comparisons?