From Start to Finish Obama Was Always Consistent 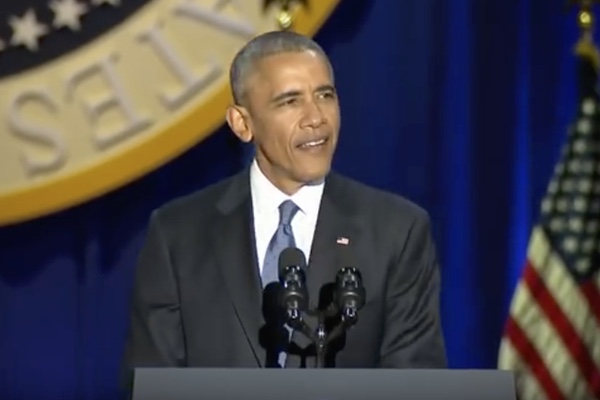 President Obama’s Chicago farewell address was strikingly consistent with words he wrote in his pre-presidential The Audacity of Hope (2006)and with his presidential speeches and actions. Although he spelled out some of his economic and other accomplishments and expressed gratitude toward his family and others who aided him over the last eight years, he kept returning to goals, values, and themes he has long emphasized.

In his Hope book he offered his “best assessment of the ways we can ground our politics in the notion of a common good.” And in his farewell speech, he once again stressed that good as the proper goal of our politics, speaking of the “the imperative to strive together as well, to achieve a common good, a greater good.” In both his book and speech, he often cited our Founding Fathers as a source for this belief and others.

Values that he had consistently emphasized before—optimism, empathy, tolerance, and rationality—he stressed again. In his book he insisted that values should be at “the heart of our politics, the cornerstone of any meaningful debate about budgets and projects, regulations and policies.”

In his book’s Epilogue he stated, “The audacity of hope. That was the best of the American spirit, I thought, having the audacity to believe despite all the evidence to the contrary that we could restore a sense of community to a nation torn by conflict.”

In his Chicago farewell speech, coming at a time when our nation seemed more “torn in conflict” than ever before in the twenty-first century, the president remarkably stated, “I leave this stage tonight even more optimistic about this country than when we started.” He again expressed the belief that we could restore our oneness.

The means to restore it he still believes are through such values as empathy, tolerance, and rationality. In his bookhe wrote that empathy is a quality “that I find myself appreciating more and more as I get older. It is at the heart of my moral code, and it is how I understand the Golden Rule—not simply as a call to sympathy or charity, but as something more demanding, a call to stand in somebody else's shoes and see through their eyes.”

In a brief 2012 essay on Obama and political wisdom, I indicated how Obama’s selection of Supreme Court justices and push for health reform (what his opponents labeled “Obamacare”) was partially motivated by his desire for our nation to display more empathy.

In his farewell speech he stated, “But if our democracy is to work the way it should in this increasingly diverse nation, then each one of us need to try to heed the advice of a great character in American fiction, Atticus Finch [from To Kill a Mockingbird], who said ‘You never really understand a person until you consider things from his point of view, until you climb into his skin and walk around in it.’”

Right after these words he expressed empathy not only for minority groups, but also for “the middle-aged white guy who from the outside may seem like he’s got all the advantages, but has seen his world upended by economic, and cultural, and technological change.” This sympathetic comment about someone who was probably a Trump voter reflected Obama’s ability to empathize with a group that liberals and progressives often criticize for their conservative views.

Being empathetic implies being tolerant. In his book he indicated that the Founding Fathers rejected “the infallibility of any idea or ideology or theology or ‘ism,’ any tyrannical consistency that might lock future generations into a single, unalterable course.” He suggested that because no one has a lock on truth, tolerance and compromise are necessary.

In a 2009 Notre Dame commencement address he spoke specifically of the importance of people with domestic political differences, for example on the question of abortion, working together for the common good, and he quoted a past Notre Dame president, who stated that “differences of culture and religion and conviction can co-exist with friendship, civility, hospitality, and especially love.”

At a 2010 University of Michigan commencement address he eloquently expressed the importance of political tolerance and compromise. “We can’t expect to solve our problems if all we do is tear each other down.” Vilifying others “makes it nearly impossible for people who have legitimate but bridgeable differences to sit down at the same table and hash things out. It robs us of a rational and serious debate.” Instead, he advised that we should “choose to actively seek out information that challenges our assumptions and our beliefs,” thus enabling us to “begin to understand where the people who disagree with us are coming from.”

In his farewell address, he again stressed the importance of open-mindedness and tolerance. He warned us not “to retreat into our own bubbles . . . [with] people who look like us and share the same political outlook and never challenge our assumptions.” Rather than “accepting only information . . . that fits our opinions,” making “common ground and compromise impossible,” we should base “our opinions on the evidence that is out there.”

In The Audacity of Hope and many times since Obama has made clear his belief that policy decisions should be based on facts, reason, and open debate based on them. He has recognized at times that passion also plays a role, but it should be subordinated to reason. So should any personal beliefs we wish to see enacted into law. In his book, he wrote, “What our deliberative, pluralistic democracy does demand is that the religiously motivated translate their concerns into universal, rather than religion-specific, values. It requires that their proposals,” for example, to ban abortion, “must be subject to argument and amenable to reason. . . . If I want others to listen to me, then I have to explain why abortion violates some principle that is accessible to people of all faiths, including those with no faith at all.”

He also mentioned his “belief that the arguments of liberals are more often grounded in reason and fact,” and that George W. Bush’s Iraq war was one “based not on reason but passion.”

In his University of Michigan speech he told graduates that “we need an educated citizenry that values hard evidence and not just assertion, and he quoted the late Senator Daniel Patrick Moynihan’s words that “everybody is entitled to his own opinion, but not his own facts.”

This month in Chicago he repeated the point he had made in Michigan in 2010, telling his audience that “politics is a battle of ideas. . . . In the course of a healthy debate, we prioritize different goals, and the different means of reaching them. But without some common baseline of facts, without a willingness to admit new information and concede that your opponent might be making a fair point, and that science and reason matter, then we’re going to keep talking past each other. And we’ll make common ground and compromise impossible.”

As an example of our need to find “common ground,” guided by a rational approach, he spoke of climate change. “Now we can and should argue about the best approach to solve the problem. But to simply deny the problem [as many Republicans have done] not only betrays future generations, it betrays the essential spirit of this country.” That spirit he believes is a “spirit born of the enlightenment,” an eighteenth-century movement that emphasized science and reason and was so important to our Founding Fathers.

President Obama’s belief that the goal of politics should be furthering the common good and that such values as optimism, empathy, tolerance, and rationality are means of accomplishing this goal are wise beliefs, and he is to be applauded for trying to act on them throughout his presidency.

Yet, despite his noble ideals and important accomplishments—and his basic decency—many political observers and historians believe that Obama’s presidency also reflected significant weaknesses. In a lengthy 2012 essay on Obama, I mentioned some of the critics of his first term, especially historians Alan Brinkley and John Summers. Now that Obama’s presidency has ended, their criticisms still contain some truth.

In early 2011 Brinkley concluded that “the kind of slow, deliberate consensus-building that Obama seems to prefer is not consistent with the character and needs of national politics . . . as exhibited by the obdurate and virtually unanimous opposition of the Republican caucus to almost everything he proposes. It may be that no president could be more effective than Obama has been in this political climate. . . . His quasi-pragmatic coolness has not so far been helpful to him or to the nation. . . . The world the President inherited requires political skills, conviction, toughness, and the willingness to fight—the very things Obama’s many admirers are waiting to see.”

A similar criticism came from historian John Summers, who thought that Obama paid insufficient attention to the irrational and non-rational side of politics. “In this tradition, unconscious emotional drives” denied “the image of the rational citizen.” Such criticism fit in with that which faulted the president for seeming too professorial, for lacking the ability to connect to the average “middle-aged white guy.”

Both historians suggested that while President Obama might have possessed many fine qualities, he was “a man out of joint with his times”—as historian Gordon Wood once wrote about the revolutionary Thomas Paine.

Brinkley was correct to suggest the difficulty that any Democratic president would have had with “obdurate” Republicans who valued empathy, tolerance, and rationality much less than did Obama. Many Republicans seemed more concerned with crippling his effectiveness than with promoting the common good. And to some extent they succeeded.

But the fact that after the election of Donald Trump, Obama could say that he was “even more optimistic about this country” than when he started his presidency also suggests that his optimism sometimes beclouded his comprehension of ugly realities and hindered him from dealing more effectively with them.

Nevertheless, in the days ahead, despite Obama’s failings, his political goals and values are likely to be ones that we deeply miss.