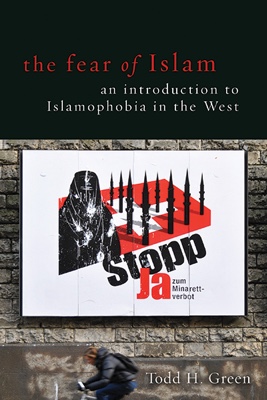 HNN Editor's Note: We reached out to Professor Green for a response.  He chose not to provide one.

Here we go again: Another professor dealing with the Middle East or Islam who can’t get basic facts right.

This time, it’s one Todd H. Green, associate professor of religion at Luther College in Decorah, Iowa, and author of The Fear of Islam: An Introduction to Islamophobia in the West (Fortress Press, 2015). The book’s title reveals its contents: the usual academic pablum about Islamists as innocent dears while critics of Islamism are greedy and vicious haters.

And the worst of those critics are “professional Islamophobes,” being “prominent individuals and organizations that deliberately drown out the diversity of Muslim voices and consciously manufacture and exploit the fear of Islam in a manner unprecedented in mainstream political and media circles.” They are “a cadre of conservative politicians, right-wing activists and bloggers, and even disgruntled Muslims or ex-Muslims” who have available “powerful political, media, and publishing platforms” which they exploit “to generate and exacerbate Western anxieties toward the Muslim ‘Other’.” To top this off, they profit financially from their ugly work. (Sure, all those $20 million checks.)

Professor Green, I regret to report, gives me pride of place in this group, calling me “the figurehead of professional Islamophobia in the United States.” He credits me, along with two others, with having “a huge impact on the misinformation about Islam that circulates so freely on the Internet, in the media, and in political circles.” (I wonder, how does a figurehead have a huge impact?)

Misinformation? Our professor friend accuses me of that, yet does not provide a single specific of where I misinform. Allow me to turn the tables and point out that he himself purveys great buckets of misinformation. To be precise, focusing on the three pages devoted to me of his 362-page diatribe turns up a profusion of mistakes, small and large. Green writes that I:

● Have a Ph.D. from Princeton University. (No, it’s from Harvard.)

● Have “some academic training in religion.” (No, I have never taken a university-level course in religion.)

● “Left the academic world permanently in 1986.” (Tell that to my students at Pepperdine University.)

● State in Militant Islam Reaches America that “Muslim Americans present a serious threat to the United States because they are sympathetic with the goals of al-Qaeda.” (No, very few American Muslims supported 9/11.)

● “Received an appointment to the US Institute of Peace from President Bush, despite numerous objections from politicians and organizations.” (No, not a single objection was heard when the appointment was made.)

● Created Campus Watch “to keep track of so-called activist scholars on US college campuses whose views on the Middle East did not align with a neoconservative perspective.” (No, Campus Watch accepts divergent perspectives but argues against “analytical failures, the mixing of politics with scholarship, intolerance of alternative views, apologetics, and the abuse of power over students.”)

● “Wanted to ostracize scholars critical of US foreign policy in the Middle East.” (No, I wanted to inform university stakeholders about appalling developments in Middle East studies.)

● Took down the dossiers of particularly egregious Middle East specialists in part due to charges of being “engaged in McCarthyism.” (No, charges of “McCarthyism” preceded and followed those dossiers; I took down those measly eight dossiers because they distracted from CW’s mission.)

At this rate – nine factual mistakes in three pages – The Fear of Islam would have over a thousand errors in the book, errors that symbolize the misinformation that too often characterizes the contemporary American pseudo-academy and consequently (to quote Green) “circulates so freely on the Internet, in the media, and in political circles.”

How do such mistakes as Green’s happen? As I wrote on the History News Network in 2008 regarding two other academics, I see two possibilities for such errors: either “that they did so purposefully; or that bias colored their reading. I doubt they did so intentionally – no one wishes to be caught out and ridiculed for making errors. My hunch is that, in their eagerness to discredit someone whose approach differs from theirs, they read my analysis hastily and prejudicially.”

There’s much talk these days of fake news; I submit that fake scholarship by Todd Green et al. is no less a threat to democracy.