Why We Need to Be Worried About Mexico 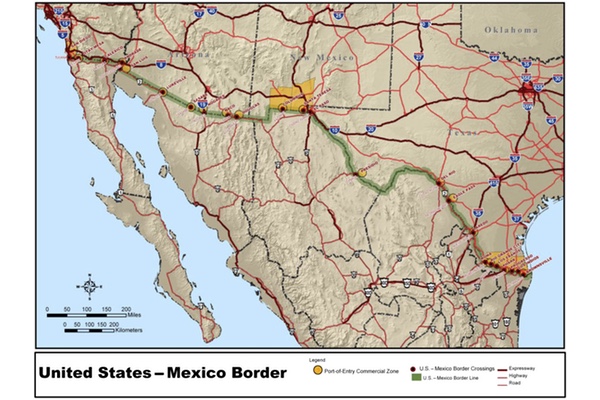 The announcement by President-Elect Donald Trump that the Congress will be asked to use taxpayer money to build a wall between the US and Mexico, and that later, Mexico will be asked to pay for the wall, brings up a major foreign policy issue, to be added to those of Russian relations, China and Taiwan, the North Korean nuclear threat, the Iran Nuclear Deal, the US-Israeli-Arab relationship, and ISIL, making major transitions in American foreign policy highly likely in the first year of the new administration. Whether creating tensions between Mexico and the US is a wise idea is up for debate.

The United States and Mexico have the tenth longest boundary in the world. The US-Mexico border, nearly 2,000 miles, is a major source of friction, even as more than 350 million legal crossings are made annually, more than any other controlled international boundary. There are a total of 48 border crossings and 330 ports of entry. The idea of a Mexico Wall, proposed by Republican nominee, and now President-Elect, Donald Trump, would be extremely difficult and costly to build, and likely would not be adequately patrolled and could easily be breached, as the geography of the long border would make many areas impossible, or at the least, extremely difficult to monitor.

The issue of the estimated half million illegal immigrants crossing the border annually, along with the drug trafficking activities of the Mexican drug cartels, and the issue of crime along the border by those who make border incursions, is a challenge for the two governments to resolve long and short term. But antagonism, hostility, insults, and demeaning of the Mexican people and their government is counterproductive, and makes the possibility of cooperation between the two nations just that more difficult to accomplish.

When one studies the US-Mexico relationship over the two centuries since Mexico became independent of Spain, it is clear that real antagonisms have existed on a regular basis, and that careful, considerate, diplomatic and tactful behavior is needed. Alas, Donald Trump possesses none of these character traits or behaviors.

Demanding that Mexico pay the entire cost of the proposed wall is preposterous, as Mexico, by comparison with the United States, is much less prosperous, and its population is, and always has been, highly nationalistic, not unusual for any nation, but particularly for one with such a long boundary with a neighbor who has been both imperialistic and aggressive. After all, America took over about half of the original Mexico in the Mexican-American War of 1846-1848. Would the US be any less nationalistic if its aggressive neighbor had possessed the ability to seize half of its territory, with no possibility that the real estate would be returned?

The fact that James K. Polk is portrayed in Mexico as an imperialist for the waging of the Mexican-American War is compounded by the intervention of Woodrow Wilson during the Mexican Revolution. The invasion by US troops under General John J. Pershing in pursuit of Mexican bandit Pancho Villa (who had attacked Columbus, New Mexico in March 1916) and evidence that Mexico was considering a military alliance with Germany in World War 1 (see Zimmermann Telegram), made for the most tumultuous relations between the two neighbors in seven decades, and soured attitudes on both sides of the border.

Relations improved over time, but the desire of American business for cheap labor led to the mass migration of immigrants, many legal, but others undocumented, across the border into the United States. The growing dependency of many Americans on addictive drugs led to increased troubles as Mexican American gangs proliferated in the Southwest and in California. And the North American Free Trade Agreement (NAFTA) also meant many corporations started to farm out their work to Mexico, where labor costs were far lower than in the United States.

And problems are bound to get worse under Donald Trump. He has demeaned and belittled the Mexican American population, the largest single ethnic group in a growing number of American states, particularly in the Southwest. Many people do not realize that Mexico is the nation of origin of two out of three Hispanics in America, and that there are more than 35 million people of that nationality in the United States (that’s 11 percent of the entire American population). The issue of the children of undocumented immigrants, who hoped to have a future under the DREAM Act, and the reality of multiple cities declaring themselves “Sanctuary Cities,” complicates plans by Trump or others who wish to crack down on immigrants who live here illegally.

Trump’s plan to deport millions of immigrants will lead to a new level of antagonism between the two nations, reminiscent of the earlier periods of tension under Presidents Polk and Wilson. Can the United States afford or desire the danger of bloodshed and violence, and possibly a major border war, with a neighbor that shares such a large boundary with us, and is also our third leading trade partner?

Given the threats we face, the risk of conflict with Mexico is unneeded, unwise, and contrary to our interests.